MP elections a test of BJP popularity vs Congress resurgence

The ruling BJP’s broad-based support in Madhya Pradesh shows signs of waning, but it is not clear whether the Congress can capitalize

New Delhi: Madhya Pradesh lies at the heart of India and will soon be at the heart of the nation’s politics. Next month’s assembly elections in the state will give the first indication on whether the ruling Bharatiya Janata Party’s (BJP) popularity endures or if a Congress resurgence is imminent.

BJP has dominated the state’s polity over the past several years. This dominance was on display in the last MP elections in 2013 when it secured 45% of all votes—the highest in the state for nearly 30 years—and 72% of seats in the state. BJP’s vote share was 9 percentage points higher than Congress’s (36%) but it was far more successful in converting votes into seats. For every seat won, the BJP needed 92,069 votes, less than half of the Congress figure of 212,332. 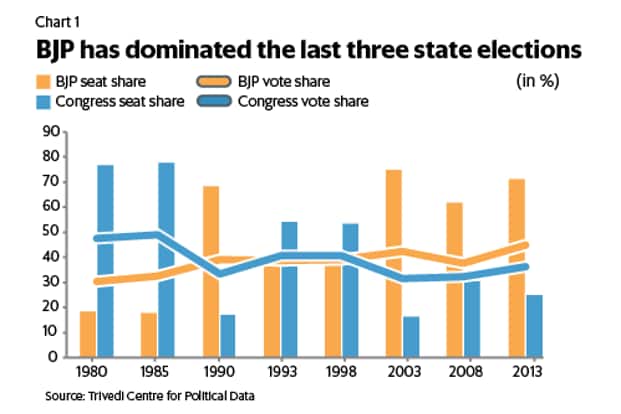 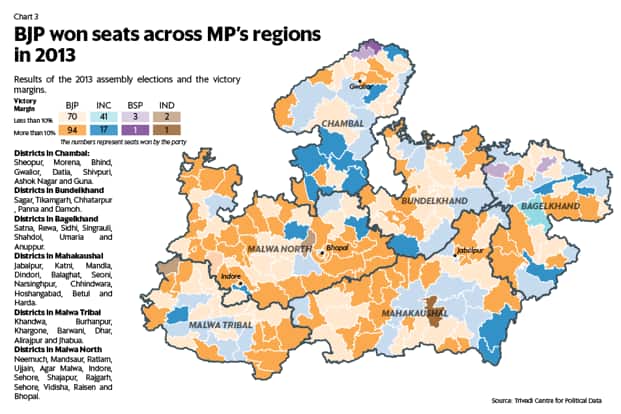 In Madhya Pradesh, scheduled tribes (STs) account for 21% of the population (compared with 9% of India’s population) and have 47 seats reserved for them.

In 2013, the BJP secured 31 of the 47 seats and, even in overwhelmingly tribal constituencies (more than 80% tribal population), the party registered significant victories.

One reason for this success could be proactive grassroots work in tribal areas by socio-religious affiliates of the Sangh Parivar. In a 2008 research paper, political scientists Tariq Thachil and Ronald Herring attributed BJP’s success in tribal strongholds across India to the Sangh Parivar’s efforts in providing critical social services in tribal pockets. These activities have not just increased BJP’s popularity but also promoted Hindu identity in these areas.

The growth of Hindu identity in a predominantly Hindu state (91% of the state’s population) could explain why both the BJP and Congress have made public displays of their Hindu credentials a central part of their campaigns.

However, recent events could threaten BJP’s prospects in tribal-dominated constituencies and elsewhere. The controversy over the Scheduled Caste and Scheduled Tribe (Prevention of Atrocities Act) and the differing stances of BJP leaders on the issue have opened a chasm between tribal voters and upper caste voters, as a previous Plain Facts column pointed out. While tribal voters seem to be dissatisfied with the government’s handling of atrocities against the marginalized communities, the BJP’s core upper caste vote bank seems to feel that the government is pandering to tribal and Dalit interest by refusing to dilute the Atrocities Act. Data from post-poll surveys conducted by Lokniti-CSDS suggests that a large majority of upper caste voters support the BJP in Madhya Pradesh, as in other parts of the country. Restiveness among them signals trouble for the party. The other threat to the BJP in Madhya Pradesh is agrarian distress in a predominantly agrarian state. While farmers have traditionally supported BJP, pressures on income have led to agrarian riots in recent years.

The political impact of this discontent could be felt more in poorer districts where BJP has enjoyed relatively less support. Using Mint’s district wealth tracker, we find that the BJP’s vote share in the 10 poorest districts of the state was considerably lower at 39% compared with 50% in the 10 richest (more urban) districts. 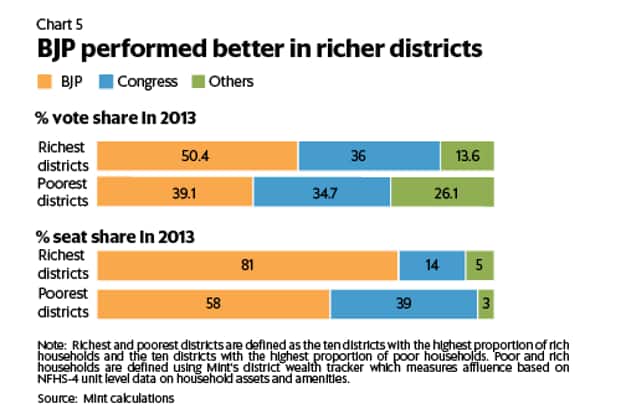 The combination of farmer protests, SC/ST tensions, and general anti-incumbency sentiment towards a party that has been in power for the past 15 years, in theory, offers hope to the Congress. However, the Congress in Madhya Pradesh has been marred by factionalism. In a 2014 research paper, Shreyas Sardesai of Lokniti-CSDS attributed the party’s disastrous showing in 2013 to factionalism. A united front with a focus on improving their poor votes-to-seat ratio could revive Congress fortunes in the state and the country.

For the BJP, another resounding victory could cement its status as the dominant party in the Hindi belt and boost the morale of party loyalists ahead of 2019. For chief minister Shivraj Singh Chouhan, a fourth term in power could also mean a bigger role in national politics in the years to come.

This is the concluding part of a two-part data journalism series on elections in Madhya Pradesh. Click here to read the first part.