The slightly frayed jeans and long silver hair tied into a ponytail give him the appearance of an ageing beatnik, but unlike other ageing beatniks, there’s still a spring in his step and a edgy excitement in his voice.

Dunu (Anorbotto) Roy, 65, got a BTech and an MTech from the Indian Institute of Technology (IIT), Bombay, in the late 1960s, but spent the better part of the next two decades repairing bicycles, water pumps and tractors in Madhya Pradesh’s Shahdol district. It’d be easy to label him a slightly off-kilter “genius", but even today, Roy would prefer being called a student revolutionary.

“Those were heady days," he says, talking about the 1970s. “The national dream was fraying; the Congress was, for the first time, being defeated; the wisdom of large-scale projects like the Bhakra dam was being questioned, and the increasing slum population in cities was challenging prevalent notions of development."

The student movement had spread in India, and the IITs weren’t immune. “Unlike today," says Roy, “a national spirit and feeling of community was alive in the student population." Students came forward in large numbers to work in rural areas.

Around the same time, the Front for Rapid Economic Advancement of India (Frea), run by a group of US-based Indians, had started work in the country. Their goal was to spur growth in small- and medium-sized industry. 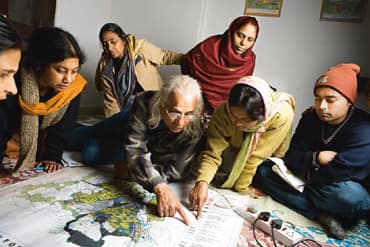 But some time after he’d started work, the group realized the solution to the problems of small- and medium-sized industries lay not in better technological inputs but in better credit lines and market development. In other words, it would be difficult for them to effect any change on the ground.

The programme then morphed into an effort to teach students about urban and rural development issues. According to Roy, in the four years that he spent with Frea, they spread to 14 locations around the country, working with Gandhian organizations, church institutions, independent groups and more than 400 students.

During those years, Roy worked all over India. The experience shaped his—and others’—future. “I realized," he says, “that most developmental activities taking place in India at that time were micro-experiments, limited to either a cluster of villages or a few sectors like education and healthcare."

There was no understanding of the linkages between sectors; and the people who did work in villages, worked only to implement their own ideas of progress and development. “It was a top-down approach," says Roy. “Nobody was asking the people what they wanted. They were talking to the people, not with the people."

What was required was a framework for creating what Roy calls “a democratic people’s plan". That could only be done by living and working in a district, and Shahdol was selected. The district met the essential criteria for this ambitious experiment. It had a representative range of activity, from primitive agriculture to modern industry; and no previous history of mobilization or development work that could potentially skew people’s expectations.

Roy and a few colleagues from Frea moved to the district. To fund their work, they set up the Vidushak Karkhana, a workshop that repaired everything from industrial pumps to bicycles. They’d estimated that data collection, the first step of their study, would take two years.

It took seven. “We had to start from scratch. Most of the data with the government was fraudulent," says Roy.

It took another two years to come up with a “planning methodology", or a framework that could be used by the people to analyse problems and create solutions. It was slow going, but over the years “we could see the model working," says Roy. It was a powerful participatory mechanism and the people of the district put it to a variety of uses.

Workers in a caustic soda factory used it to address the health problems that chemical pollution from the factory was creating. Farmers applied it to assess the energy costs associated with pumping groundwater; and to determine how resource-intensive their crops were. Labour unions determined minimum wages and organizational strategies based on it.

But 17 years into the experiment, exhaustion had set in. The original set of people had left. Roy handed over the legacy of the Shahdol Group, as it had come to be known, to some enthusiastic local boys, and returned to Delhi. He was, however, far from done.

A brief stint at the World Wide Fund for Nature followed. There, he created a cell to monitor the effects of pollution on habitat. “They shunted me out after four years, when my work started upsetting the companies that funded them," he says candidly.

That’s when he set up the Delhi-based Hazards Centre, a research group that “helps with anything that’s difficult or dangerous". It works with marginalized groups, helping them face challenges and adapt to changing circumstances.

In Gujarat, his small group of researchers assisted communities in making claims under the Tribal Rights Act; and in Delhi, they worked on creating environmental awareness among children in municipal schools.

To the outsider, it seems like he’s drifted a long way from his engineering days at IIT. “Not at all," protests Roy. “The IITs were meant to create solutions to national problems, which is why they were called Institutes of Technology and not Institutes of Engineering and Management, which is what they have become today."

“I pity those who graduate from IIT just to sell soap in the US," he says caustically. According to him, the 1990s were a “dark period" for student activism. However, things are beginning to look up.

Questions are being asked once again. The Hazards Centre has started getting 15-20 interns every year from the IITs. Roy is being invited to speak at colleges across the country. The student movement is making a comeback, and Roy is, as before, at its helm.

Does he think the film 3 Idiots is indicative of the changing attitude towards engineering? “Yes and no," he says, after thinking for a moment. Roy admits that the film raised questions about an engineering education, but believes that the answer it provided was flawed.

“It basically said you could succeed in professions like photography or music despite your engineering degree; but it never answered the real question—how do you make engineering relevant?"