Bangalore: Port operator PSA-Sical Terminals Ltd, which runs India’s fourth biggest container terminal at the Tuticorin port in Tamil Nadu, says its operations have become commercially unviable after the tariff regulator slashed tariffs for services rendered at the facility, which is owned by the Centre, by 34%. 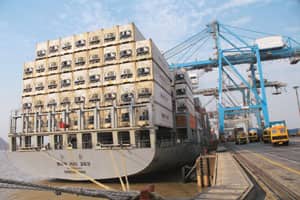 Familiar waters? In 2006, Dubai’s DP World, which runs a terminal at Jawaharlal Nehru Port (above), had taken the tariff regulator to court after it cut tariffs for its container terminal services. The regulator later allowed DP World to raise tariffs by 10.3% from 1 October. Ashesh Shah / Mint

Shareholders in the joint venture, which was given rights to operate the terminal for 30 years beginning 15 July 1998, will, in the next few days, decide the future course of action against the tariff cut notified on 30 December, he said. The port has the capacity to handle 450,000 standard containers a year.

The new rates, which came after PSA-Sical sought to raise tariffs by 30%, will remain in force till 31 December 2011. Terminal operators at the country’s ports charge varying tariffs for services they render.

“There is no merit in the proposal of PSA-Sical Terminals for an upward revision of 30% over the existing tariffs," regulator Tariff Authority for Major Ports said. “In view of the cost position, this authority decides to reduce the tariffs by 34%".

This is the third time that the regulator has cut tariffs after PSA-Sical Terminals started operating the facility. The first two?tariff?reduction?orders were not implemented because of a stay ordered by the Madras high court in response to petitions by the port operator.

Though the regulator has cut tariffs by 34%, Ramakrishnan said the reduction would effectively be in the 41-42% range. “Whatever profit we have made in the past 10 years will be wiped out by this decision," he added.

In September 2002, the regulator cut tariffs by 15% when the terminal operator asked for an increase. The Madras high court set aside this order and allowed the operator to charge the existing tariff when PSA-Sical Terminals filed a writ petition against the order.

Again, in August 2006, the regulator cut tariffs by 50% when the operator sought a hike of around 30% on the Rs2,300 it was charging users for a standard container. PSA-Sical challenged the order in the Madras high court. The firm also reduced the cargo handling capacity at the Tuticorin terminal to the minimum stipulated under its agreement with the government for 18 days beginning 15 July 2007.

“The high tariffs levied at some other terminals alone will not justify similar tariff elsewhere," the regulator said in the fresh order dated 30 December.

Revenue earned after the latest tariff cut would not be sufficient to cover cash operating expenses and royalty payments to the Union government-owned port, another PSA-Sical executive said on condition of anonymity.

Under the terms of the contract, the royalty per standard container rises by about 30% every July. Currently, it pays Rs1,313 per container which will rise to Rs1,641 in July this year.

In the 30th and final year of its operations in 2029, PSA-Sical will have to pay, at this rate, a royalty of Rs5,200 per standard container to the government.