New Delhi: Law minister Salman Khurshid on Thursday will be leading an Indian delegation to the one-day Heart of Asia Ministerial Conference to be held in Kabul to discuss the future of Afghanistan.

Khurshid was named leader of the delegation after finance minister Pranab Mukherjee pulled out of the visit earlier this week amid media speculation that the cancellation had to do with the upcoming presidential election in which Mukherjee is seen as the frontrunner. 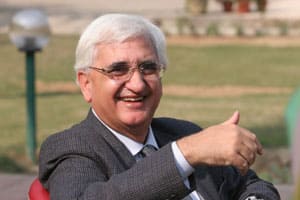 The name of the conference stems from the recognition that Afghanistan is situated at the intersection of Asia’s great regions – South Asia, Central Asia and the Middle East— and that its stability is key to the development of its neighbours in Asia.