Paraguana, (Venezuela): An explosion tore through Venezuela’s biggest oil refinery on Saturday, killing at least 24 people, wounding more than 80 others and halting operations at the huge facility in the Opec nation’s worst industrial accident in recent memory. 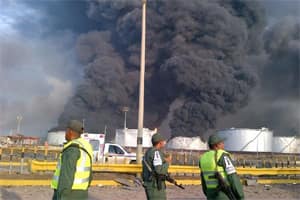 “Unfortunately, 24 people have died, the majority of them members of our National Guard," vice president Elias Jaua told reporters in local Falcon state. “Four people are in hospital right now, two were transferred to Zulia state and 50 people, thank God, were sent home after treatment because their injuries were not serious."

Located on a peninsula overlooking the Caribbean sea in the west of Venezuela, Amuay is part of the Paraguana Refining Center, the second-biggest refinery complex in the world with an overall capacity of 955,000 bpd.

Ramirez told reporters that PDVSA crews working through the night managed to reduce the intensity of the blaze by 80%, and that the firm would not suffer any shortages.

“We have all our other storage facilities," he said.

He had earlier described the blast, which happened at about 1am local time as a “significant explosion".

Health minister Eugenia Sader traveled to a local hospital to visit some of the injured, and Falcon state governor Stella Lugo said the authorities were sparing no expense.

“We are deploying our whole fire service team, all our health team, the whole contingency plan on the orders of Comandante Chavez to first of all care for the people affected by this emergency," Lugo told state TV.

PDVSA has struggled with repeated refinery problems in recent years, crimping its capacity and its ability to fulfill ambitious expansion plans. Power faults, accidents and stoppages for maintenance have also curbed exports of oil products.

In 2010, there was a massive fire at a PDVSA fuel terminal on the Caribbean island of Bonaire, then a blaze at a dock at the Paraguana complex that halted shipping for four days.

Also in 2010, a natural gas exploration rig, the Aban Pearl, sank in the Caribbean. All 95 workers were rescued safely. Reuters