Kharagpur: The Indian Institutes of Technology at Mumbai and Delhi may be the most glamorous of the seven IITs, with their smattering of Silicon Valley-funded start-ups, lavish cultural festivals and urban backdrop—but somehow another one has managed to surpass them. 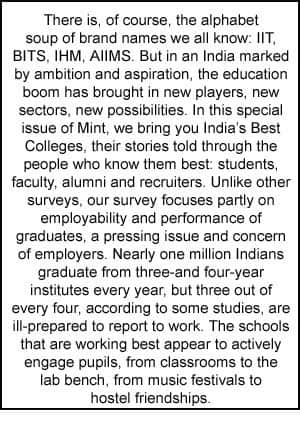 “Prior to Indian independence, there were researchers in universities, and there were engineers, who were little more than glorified technicians," said M. Chakraborty, the institute’s deputy director, “and the IIT was set up so that India could have engineers capable of doing research."

Fifty seven years down, the engineering college stands testament to that possibility. A 2007 ranking of the world’s 500 universities based on their academic prowess mentions only IIT Kharagpur and the Indian Institute of Science (IISc), Bangalore.

“Remember that the IISc is exclusively for hard-core post-graduate research. Here, we have to manage research as well as our enormous undergraduate teaching responsibilities," said Chakraborty. With nearly 1,500 peer-reviewed research publications a year, this means that every faculty member from the institute churns out three publications a year on an average. “I don’t want to boast, but I doubt if other universities, let alone engineering colleges, can boast of such a track record," Acharya adds.

The reason why the college can pull this off, is because a good number of their professors are either involved with research projects that involve industry, or are themselves part of companies. So, for example, when a processor-making company such as Intel is not sure if their newly developed chip is foolproof, they would approach, say, Pallab Dasgupta in the computer science department. He and a few research scholars, typically PhD students, and in some cases master’s and BTech students, try to design a program that can scan and stonewall the chip for bugs.

So in a win-win sort of deal, the resulting knowledge ends up as research publications, and the project itself generates consultancy fees for the institute and professors. “To give you a ballpark figure, there are about 850 projects involving industry, worth Rs300 crore," said Manoj Mondal, a senior administration officer at the institute’s Sponsored Research and Industrial Consultancy cell.

IIT Kharagpur has big hopes from its AVLSI lab, where Prof. Dasgupta works. VLSI, short for very large scale integration, is a slightly dated term for pushing thousands of circuits into one thumb-sized chip. On the outside these chips look like rectangular centipedes, because of all the pins jutting out, but put them under a microscope and it looks like Delhi from an airplane; thousands of squares and rectangles and tubular roads Tetris-ing—yes, like the video game—left and right.

A few blocks away, T.K. Bhattacharya, in the electronics and electrical communications lab, picks a glimmer of silicon, with a tweezer. “These are the new-age accelerometers. The next-generation satellites will use them so that satellites don’t wobble out of their orbits." Accelerometers are hypersensitive devices that detect vibrations, and measure how much force is acting on a body.

Isro (Indian Space Research Organisation) satellites launched recently used accelerometers weighing 10kg, but Bhattacharya’s accelerometers, that were fluttering with the ceiling fan’s breeze, would do the same job in the future.

Within his lab are a labyrinth of smaller labs, that host fabrication machines, power microscopes and smelly chemicals that are used to make these sensors, each of which generates a doctorate for his students.

Importantly, at the IIT labs, small is big. “Even globally, all research is in one way or the other trying to make devices that use less power and that means smaller devices, and more importantly ways and methods that have health applications," said Suman Chakraborty, associate professor at the very large mechanical engineering department. He is also a visiting professor at Stanford University, an elite school in California

His lab, however, is the micro-fluidics lab, that studies how liquids move and behave at the micro level. A number of devices and contraptions line the labs platforms, with eager research scholars peering into microscopes. But beyond the micro-fluidics labs the institute has placed huge bets on medical technology. Its latest department, called the School for Medical Science and Technology, offers research programmes for doctors and engineers. “We train doctors to think like engineers and vice versa," said department head Ajoy Kumar Ray. Medical Imaging and early medical diagnosis, medical instrumentation and bio-materials are some of the major areas of focus in the school, and among the diseases it tackles, cancer is top priority. “See that region over there," Roy points to an image on computer monitor, which is a white, wavy blob occasionally coloured in pink. “That’s a section of the cells from the mouth. Just that small region plays a vital role in the onset of oral cancer and hundreds of PhDs are going to come out, just studying that region."

Some of his colleagues are working on crab shell bandages which, he says, act like medicine on wounds. Others are working on using titanium that can be used for broken bones, “but the catch is we need more." There are enough funds, lots of industry-backed projects but few students willing to toil on research.

The average IIT BTech graduate is scooped up by finance companies, international technology companies, the IT sector, or becomes a ‘BLACKI’, someone who gets an admission call from all six of the Indian Institutes of Management—not a rarity in this campus. And the latest craze is entrepreneurship.

Amit Bhutoria, graduated in 2006, worked for Goldman Sachs in Bangalore for a year, and is now a senior software engineer for Minekey Inc., an IIT-incubated tech start-up. Headquartered in California, Bhutoria shuttles between Gurgaon and Kharagpur, where the company’s research and development takes place.

Two cubicles down, his junior Joy Deep, who’s co-founded Intinno Technologies that’s designed a course management system, agrees that starting your own company was never so encouraging as now. “The college has introduced a deferred placement programme for us. So if the company doesn’t work, we can sit for placements next year. But that’s just to keep our parents happy," he mischievously adds.

Professors and students see themselves as technologists, more than academicians. “We can’t entirely depend on the government for our growth," explains Acharya. “All our research centres involve a lot of help from our alumni, and projects. So we have to encourage our students to be entrepreneurs and industry leaders," he added. The institute plans next year to start honing budding entrepreneurs from the joint entrance examination stage itself.

Away from the glitzy microchips and the entrepreneurs, is a patch of land that’s among the IIT’s proudest creations—the tea garden. Much of Kharagpur has laterite, or red soil, and the temperature soars into the 40s. “It was an ingenious, almost audacious idea," said Ashis Datta of the agriculture and food engineering department. The scientists dug out the rocks from the soil, which impede the development of strong roots, and first cultivated black pepper, berries, coffee and sandalwood and in their shade, grew acres of tea plants. Tea is sensitive to temperature, but not only did the shade technique work, they also have managed an integrated farming system. “It’s not Darjeeling quality tea, but will give Tata Tea a run for its money at Rs150 a kg," said Datta. In fact, one of the main thrusts of establishing the IIT was to boost agriculture yield and produce, said M. Chakraborty, “Still, it’s only the IIT at Kharagpur that has an agriculture department," he adds.

Nearby sits the 68-year-old Soumitra Sen. A plant geneticist, he has identified bacteria that can strengthen jute fibre and is already testing it in pilot project across villages in West Bengal. In his labs are huge refrigerators of super-chilled seeds—exotic insects—and rows of every imaginable crop. Sen, even at his age, continues to reflect on genes and techniques to improve plant yields. “It’s too early, but we plan to publish a paper that fundamentally change the way plant’s reproduce."

And around a few months from now, Debabrata Das of the biotechnology department will know if an eeky algae that grows in sludge, will be good enough to extract hydrogen. In a $120-a-barrel world of oil, leading researchers across the world are trying to produce cheap hydrogen—the cleanest, most efficient fuel known.

“At the heart of all progress is faculty," said Acharya, “and retaining quality faculty is a tough job." Unlike vibrant cities such as Delhi or Mumbai, Kharagpur is not exactly a city of many options. “In fact, a professor colleague from another IIT joked that one of the reasons why IIT Kharagpur does so well on research is because there’s nothing else to do in Kharagpur other than work," said Roy.

Post-sunset, the world outside the campus shuts off and the only lights are from within the campus, such as that of Sudeshna Sarkar, who works on language and information technology. Among the highlights of her research is a program which outputs a braille printout. “Thus visually challenged users don’t have to depend on a sighted person for reading off a computer," the University of California, Berkeley, graduate adds.

And there’s a nagging human resource issue—qualified professors. Quite a few senior faculty are doing extended terms, the salaries are low compared with what most of them could earn at an MIT or even a European university. “Plus, all IITs have to mentor—and that includes lending faculty too, an upcoming IIT as instructed by the government. We will be stretching the little that we have to no end," said a professor, who didn’t want to be identified.

But the research continues.