Nobody expects a rate action when the monetary policy committee of the Reserve Bank of India (RBI) finishes its two-day review on Thursday. A majority of the economists polled by Mint expect RBI to focus on squeezing extra liquidity from the system

Why is there extra liquidity? 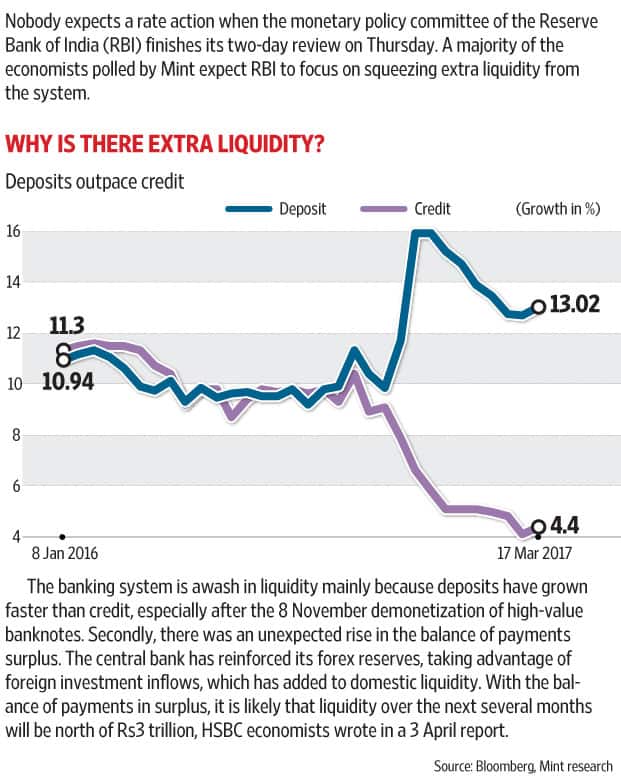 The banking system is awash in liquidity mainly because deposits have grown faster than credit, especially after the 8 November demonetization of high-value banknotes. Secondly, there was an unexpected rise in the balance of payments surplus.

The central bank has reinforced its forex reserves, taking advantage of foreign investment inflows, which has added to domestic liquidity. With the balance of payments in surplus, it is likely that liquidity over the next several months will be north of Rs3 trillion, HSBC economists wrote in a 3 April report.

Why is there such a fuss about this? 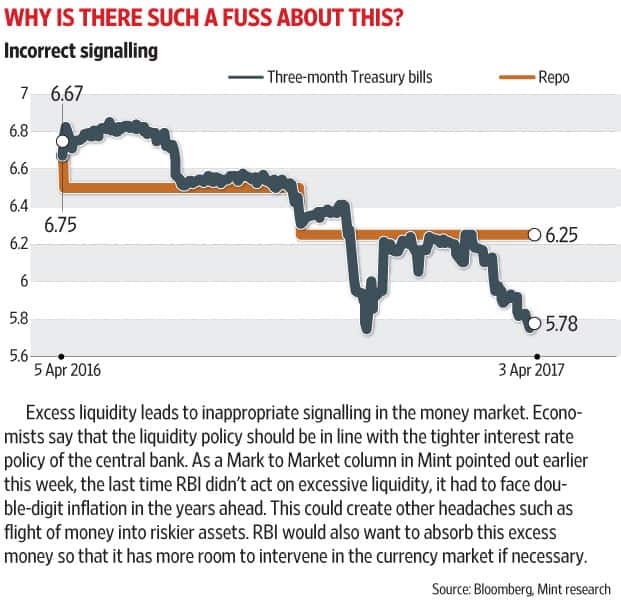 Excess liquidity leads to inappropriate signalling in the money market. Economists say that the liquidity policy should be in line with the tighter interest rate policy of the central bank.

As a Mark to Market column in Mint pointed out on Monday, the last time RBI didn’t act on excessive liquidity, it had to face double-digit inflation in the years ahead. This could create other headaches such as flight of money into riskier assets. RBI would also want to absorb this excess money so that it has more room to intervene in the currency market if necessary.

What options does RBI have?

Increasing the cash reserve ratio (CRR), or percentage of deposits that banks must park with the central bank, is one option, but economists say that it is inadequate and costly for banks. A second option is the reverse repo, where the central bank places bonds as collateral with banks and absorbs money. But that will lead to a shortage of government securities.

Moreover, as HDFC Bank Ltd economist Abheek Barua points out, this is available only for commercial banks and primary dealers, and not other entities such as mutual funds. The current buzz is about a Standing Deposit Facility recommended by the Urjit Patel panel on monetary policy reform in 2014, which operates without collateral. But this would require an amendment of the RBI Act and could take some time to be implemented.