Home >politics >policy >India’s exports contract for a sixth month, down 20.2% in May

India’s exports contract for a sixth month, down 20.2% in May

Overseas shipments fell 20.2% in May from a year earlier and imports dropped 16.5% on lower oil prices, the commerce ministry said in a statement on Tuesday. That resulted in a $10.4 billion trade deficit versus an $11 billion gap predicted by the median of 19 estimates in a Bloomberg survey. 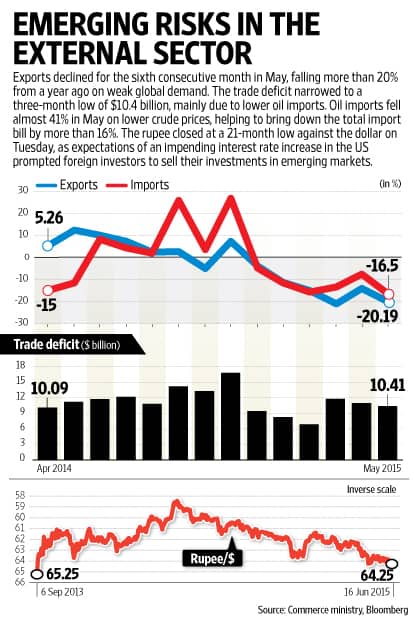 A weakening rupee and an acceleration in inflation indicates room is decreasing for Reserve Bank of India (RBI) governor Raghuram Rajan to lower interest rates further.

The rupee touched the day’s low soon after the data. The currency has weakened 2.1% over the past three months, the fourth-worst performance among 24 emerging market currencies tracked by Bloomberg. Bloomberg