Mumbai: Technology will play an increasing role in healthcare consultation, patient care and medicine delivery, according to the sixth edition of consulting firm Deloitte Touche Tohmatsu India Pvt. Ltd’s 2016 predictions for the technology, media and telecommunications sector in India.

Rapid adoption: Deloitte researchers expect digital adoption to be a significant contributor to the overall Indian healthcare market that is worth $100 billion and is expected to grow at a 23% CAGR (compound annual growth rate) to reach $280 billion by 2020. Rural India, which accounts for over 70% of the population, will be a significant contributor to the country’s incremental healthcare spending going forward on account of being significantly underpenetrated at present, the researchers believe.

Medicine e-commerce: In the coming years, the Deloitte report expects significant adoption of e-commerce in the retail medicine sales market, which is expected to reach $55 billion in 2020. Medicine e-commerce is likely to see high growth as more firms enter the segment with innovative business models, backed by global investors. These firms would look to take advantage of the inefficient distribution system leading to non-availability of medicines and the issue of counterfeit drugs, which currently plague the existing physical pharmacy business. Once the regulatory bodies provide guidelines for online sales of medicines, the researchers expect the sector to get a further boost. Deloitte estimates the market for pharma e-commerce will grow 10 times to $400 million in 2017.

Telemedicine: This provides another exciting opportunity in a country like India, the researchers say. The medical infrastructure in the country is concentrated in the urban areas, while a substantial section of the population lives in rural areas with limited access to such facilities. Through the use of technology, this divide can be bridged. Consultation through mobile devices using video, images, and audio channels can help patients who do not have access to good medical aid. In 2010, the Indian telemedicine market was estimated to be ₹ 50 crore and is expected to grow at 20% CAGR to reach ₹ 102 crore in FY15.

According to the Deloitte report, the current telemedicine market is dominated by:

• Narayana Health which has 900 telemedicine centers across 60 countries, 800 of these centers are in India.

• Apollo Telemedicine Networking Foundation has 115 centers across the country.

• Clinic, a specialized telemedicine venture started in 2012, has a presence across 25 locations in north and east India.

Electronic medical records (EMRs): Deloitte researchers expect India to adopt EMRs in a big way, and though the large healthcare providers may adopt non-compatible EMRs in the initial stages, they believe that converging standards for EMRs will emerge. With adoption of EMRs, Big Data and healthcare analytics are expected to be game changers in the way ailments are diagnosed, monitored and treated. Once medical records are available on a cloud platform, a patient’s history can be made available to the doctor (or hospital) for better diagnosis. EMRs, the researchers note, can also be used by specialists to establish healthcare trends (epidemic diseases, deficiencies prevalent, etc.) in the country and digital connectivity can be used to disseminate critical information for both prevention and cure. 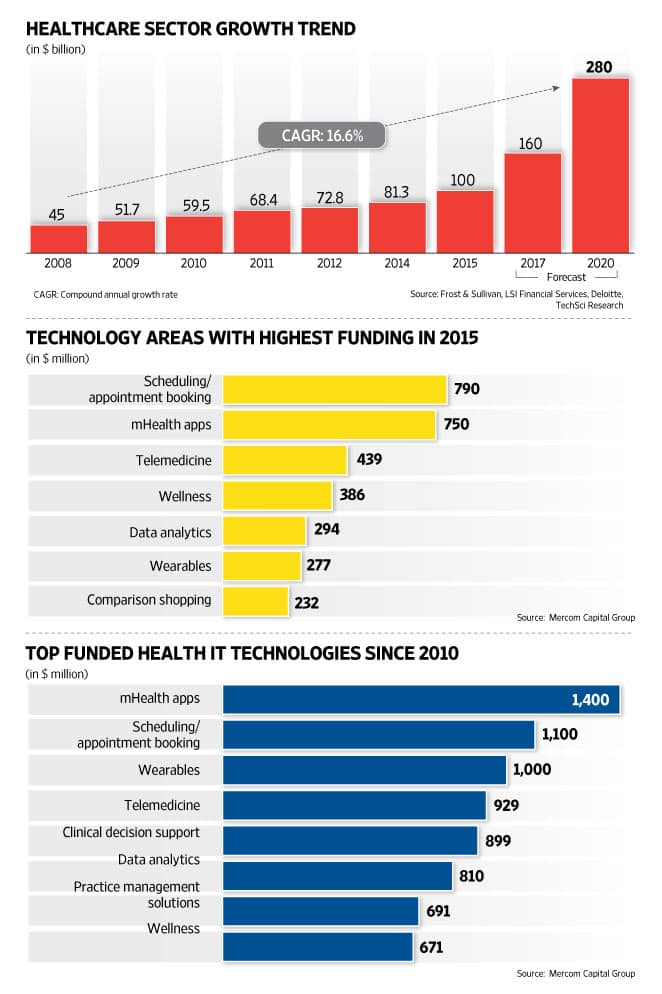 Predictive healthcare analytics: A significant development in healthcare will be in the area of predictive healthcare analytics wherein the vital components of a human body can be monitored and any deviation that may result in a medical emergency is detected in advance. The entire process, the researchers say, can work without human intervention through wearable devices that monitor a person’s vitals and using the data available on a cloud platform to warn the patient in case of anomalies or even inform a doctor who can then monitor the patient remotely. Medical records which are available on cloud platforms or with the patients can be used by private companies and the government to establish healthcare trends (epidemic diseases, deficiencies prevalent, etc.) in the country. This will help channelize funds through various government and corporate programmes in the right direction.

Funding for healthcare: Venture capital funding, including private equity and corporate venture capital, in the health IT sector totalled $4.6 billion in 574 deals in 2015, slightly below 2014’s record $4.7 billion in 670 deals—yet, a big year for the sector, according to consulting firm Mercom Capital Group’s annual report on funding and mergers and acquisition activity for the healthcare IT/digital health sector in 2015.

Total corporate funding in health IT firms, including debt and public market financing (including initial public offerings, or IPOs), touched $7.9 billion in 2015 against $7.8 billion in 2014.

Since 2010, the sector received $13.4 billion in venture capital funding in 2,050 deals and almost $7 billion in debt and public market financing (including IPOs), bringing the total funding for the sector to $20.4 billion.

The top venture capital funding rounds in 2015 were Chinese firm Guahao’s of $394 million, NantHealth’s $200 million round, ZocDoc’s $130 million raise, followed by Virgin Pulse’s $92 million raise. Practo was next with a $90 million round, Collective Health raised $81 million and Health Catalyst brought in $70 million. A total of 909 investors participated in venture capital funding rounds for healthcare IT firms in 2015 against 732 in 2014.