Panel for drafting tariff norms got funds from port lobbies

Panel for drafting tariff norms got funds from port lobbies

Bangalore: An expert group established by the shipping ministry to draft new tariff guidelines for services at India’s big ports was funded by a port industry lobby and an association representing the Union government-controlled ports—the entities to whom such norms would apply—raising doubts about the fairness of the study.

The Indian Private Ports and Terminals Association (IPPTA) and the Indian Ports Association (IPA), a body representing the 12 ports, equally shared the bill of ₹ 18 lakh to pay for the report prepared by The Energy and Resources Institute (Teri), at least two people briefed on the matter said on condition of anonymity.

The existing tariff-setting guidelines framed in 2005 are due for revision after a five-year run. Apart from private terminal operators, the new guidelines would be applicable to the government-owned ports which also run cargo-handling facilities. 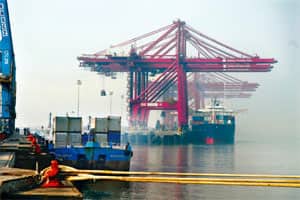 Awaiting change: The existing tariff-setting guidelines are due for revision after a five-year run. Photo: Ashesh Shah/Mint

Teri was chosen by the shipping ministry to draft the new guidelines that would form the basis for the ministry to frame the new norms.

“We did not have a choice," an IPPTA executive said on condition of anonymity. “A gun was put to our head. The ministry told us in 2010 that if we wanted to get the report prepared quickly, it would have to be funded by us. Otherwise, the bureaucratic procedure for a government-funded study in terms of getting the funds sanctioned and for finalizing the expert agency through a tender would take a long time, delaying the process."

An official at IPA confirmed the development. “Initially, the ministry had set up an internal committee to draft the new guidelines. But, following protests from IPPTA that the guidelines so prepared by the panel would be prejudiced or biased, it was decided to entrust the work to an independent agency, with IPPTA and IPA pooling funds to pay for the study," the IPA official said.

The Teri report has, however, not gone down well with the private terminal operators.

IPPTA said that the Teri report “has done nothing to rectify the flaws in the existing guidelines framed in 2005" and which has now become a contentious issue between the ministry, private terminal operators and the Tariff Authority for Major Ports (TAMP), the tariff regulator for the ports controlled by the Union government.

IPPTA had sought a review of the present cost-plus approach to setting tariffs because they claimed the tariffs so set do not offer a fair return to the terminal operators. It had suggested that the return on capital set at 16% should be allowed on the gross block of assets rather than the current practice of allowing return on the net block or on the depreciated value of the assets.

IPPTA had contended that the calculation of return on depreciated asset value would continuously reduce the return over a period of time and at one stage would become insufficient to carry out the operation of the terminals.

But Teri has recommended allowing return on the basis of the average of the opening and closing balance of block of assets for the year for which the tariff is fixed as per the audited books of accounts.