Congress and JD(S) leaders say CM H. D. Kumaraswamy initiated talks as he did not want the impression to gain ground that things were not working in the new coalition

New Delhi: The coordination committee of the Congress and the Janata Dal (Secular) will meet on Sunday amid expectations of a breakthrough in efforts to end a tussle between Karnataka’s alliance partners.

Senior leaders of both parties said the talks were initiated by chief minister H.D. Kumaraswamy, as he did not want the impression to gain ground that things were not working in the new coalition formed to keep the Bharatiya Janata Party (BJP) out of power. 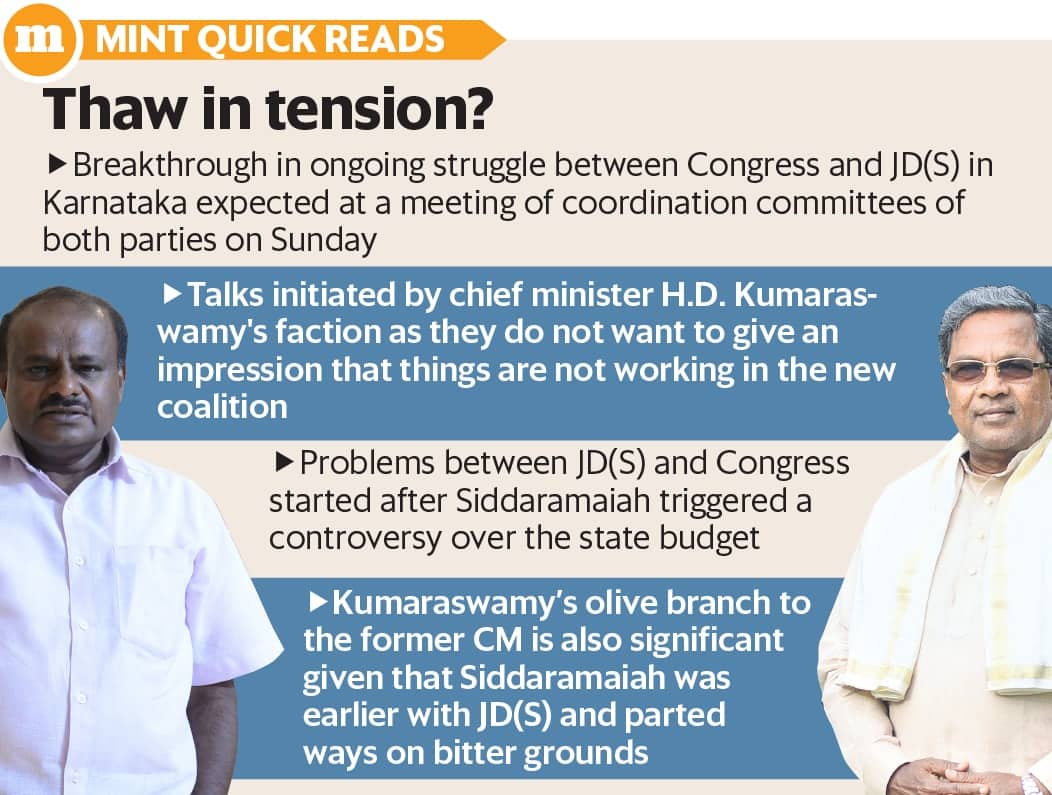 “The coordination committee is the forum to discuss all the differences between the Congress and JD(S). We have reached out to all Congress leaders in the five-member committee, including former chief minister Siddaramaiah, state in-charge K.C. Venugopal and deputy chief minister G. Parameshwara. We are particularly trying to find a solution to the issues being raised by Siddaramaiah," said a senior JD(S) leader, requesting anonymity.

The rift between the JD(S) and the Congress started after Siddaramaiah said the new government cannot present a fresh budget and, instead, should try a supplementary budget. Besides, a section of the state Congress unit, annoyed at having to give up its claim on the finance ministry, is now trying to impose its views on the coalition government.

“Senior leaders of the party have also spoken to Siddaramaiah and have asked him to work with the coalition. Leaders in Delhi are annoyed with the public statements made by Siddaramaiah which have caused fissures between the alliance partners," said a senior Congress leader in Delhi.

The move by the JD(S), say political observers, is to pacify Siddaramaiah, who has also allegedly raised doubts over how long the alliance would last.

Kumaraswamy’s efforts to reach out to the former chief minister is also significant given that Siddaramaiah, a one-time JD(S) heavyweight, has been a bitter critic of both H.D. Deve Gowda and his son since he parted ways with the party.

The Congress is now hopeful that with the interventions of the central leadership, Siddaramaiah will moderate his public statements. The party for now is not considering any serious action against the leader.

The coordination committee is also likely to discuss the government’s common minimum programme, which was compiled on the basis of the pleges made by the Congress and the JD(S) in their election manifestos.

“The report is ready and we will take it up for discussion after it is adopted on Sunday. It basically talks about all the common points in the manifestos of the two parties. The focus will be on agriculture, rural distress and rural infrastructure, along with farm loan waiver," the JD(S) leader quoted above said.