New Delhi: The Supreme Court on Thursday ruled that candidates who conceal their criminal antecedents while filing nomination papers run the risk of being disqualified—the latest in a slew of judgements aiming to clean up the nation’s elections and politics.

Ruling that it was absolutely necessary for candidates to disclose any criminal antecedents, especially if they related to heinous crimes or serious offences like corruption, the apex court held that non-disclosure would amount to a “corrupt practice" under Section 123 of the Representation of the People Act, 1951. Such a corrupt practice makes the candidate liable to be disqualified under Section 8A of the same Act.

In the 97-page ruling, a bench of justices Dipak Misra and P.C. Pant highlighted the criminalization of politics, calling it an “anathema" to the “sanctity of democracy". The court defined the essentials of a democracy. The electoral process is sacrosanct to a nation’s democratic fabric and the voter’s “right to know" is paramount, as “a free and fair election stabilizes the democratic process which leads to good governance". 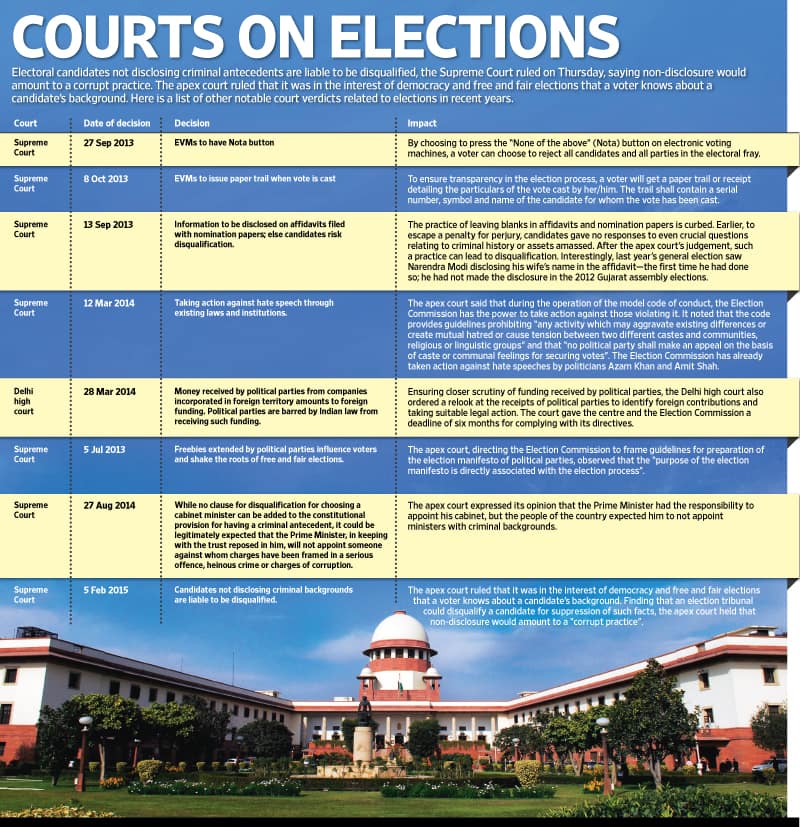 Referring to an apex court decision of 2013 that laid down that a voter could choose none of the candidates in their constituency—through a none of the above, or Nota, option—the court said that the right to know was a “fundamental right" of the voter in this context too.

Political parties have often expressed the fear that unscrupulous rivals could file false cases in order to get a candidate disqualified.

However, as per the provisions of the 1951 Act, a criminal case should have been filed much before an election and the case should have progressed within the judicial system—which allays fears of false cases being filed at the time of elections.

Section 33A lays down that candidates must give full information regarding criminal cases that have been pending against them for over 6 months prior to the filing of nominations and wherein charges have been framed by the court and the offence attracts imprisonment for two years or more.

Candidates are also required to disclose conviction in certain kinds of offences—like those under the Prevention of Corruption Act, and cases related to rape, cruelty towards the wife and making statements leading to hatred and ill-will between classes of people—and where they have been sentenced to jail for a year or more.

Thursday’s case is a reminder of a 2013 verdict which said that failure to answer crucial questions in affidavits could lead to an electoral candidate being disqualified. The Supreme Court had held that candidates must leave no blank sections in the affidavit and give accurate information. If they failed to do so, the returning officer could take action against the erring candidate.

On Thursday, the Supreme Court manoeuvred through minute details like the meaning of ‘complete information’ and instances where the candidate might not know of developments in his or her criminal case. It held that where heinous offences have been alleged and a court has initiated the legal process, the candidate will be aware of such a development and must disclose it—because “if the offences are not disclosed in entirety, the electorate remain in total darkness about such information".

However, where a first information report has been filed, the candidate may not necessarily be aware of it and, in such cases, would be unable to furnish such information.

The verdict also clarified that mere objection to the information provided by a candidate cannot lead to rejection of his or her nomination because the returning officer would be unable to ascertain whether or not these objections were correct—perhaps indicating that a due process of investigation would have to be undertaken prior to any adverse action against a candidate. This, too, echoed the 2013 verdict, which had required the returning officer to issue warnings to candidates who did not disclose full information before taking any action against them.

Reflecting a continuing tussle over the matter between the judiciary and the legislative branches, the judges pointed out that previous attempts by the legislature to limit disclosure of information have not met with the judiciary’s approval. In 2002, the government had amended Section 33B of the Act to stipulate that candidates need not disclose additional information sought by court verdicts as well as directions and orders by the Election Commission. This was later struck down by the Supreme Court.

The court also clarified that only when there is suppression of a criminal charge framed against a candidate would it be a corrupt practice.

The ruling, which came in the backdrop of the election of the president of the Thekkampatti panchayat in Tamil Nadu’s Coimbatore district, will apply to all candidates. The case had reached the apex court by way of an appeal against a Madras high court decision nullifying the election of Krishnamoorthy, who only uses one name, as president of the Thekkampatti panchayat in 2006. His nomination had been challenged before the election tribunal on the grounds that he had suppressed details of criminal cases pending against him.

In August 2014, the apex court, in a five-judge bench ruling, noted that it was the “constitutional expectation" from the Prime Minister that no person with a criminal antecedent would find their place in the cabinet.

A senior official at the Election Commission, who did not want to be quoted, said: “The Supreme Court is the law of the country. At the time of nomination, if a complaint is filed then action can be taken on it."

According to this official, no such complaint has been filed with the Commission till now for the Delhi assembly elections.

Chakshu Roy, head of outreach at think-tank PRS Legislative Research, said, “It is a voter’s fundamental right to know the antecedents of a candidate standing for elections. The Supreme Court in its judgement has made it unequivocally clear that proven cases of incorrect information on election affidavits would result in disqualification of the candidate. So if after the Delhi assembly elections any cases to this effect come to light, such candidates would lose their seats."

K.J. Rao, a former advisor to the Election Commission, said: “This is a very good order. This is a step forward in electoral reforms. If the returning office comes to know of any suppression of information, action can be taken."