Beyond schools, 20% at graduation level and 13% at postgraduation and above levels are availing private tuition

Taking private coaching classes individually or in a group, at home or at any other place, by a single or more tutors for different reasons has become a norm, the survey underlined. More students opting for private tuition reflects poorly on the quality of education in schools and colleges. 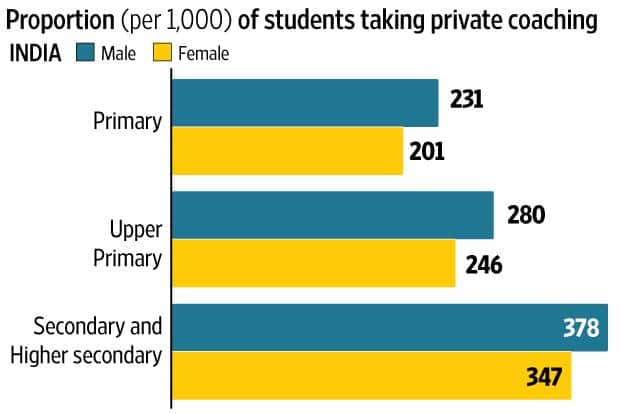 What is interesting is that though private coaching is prevalent across India, in eastern states it is very high. For example, in West Bengal, 89% of male secondary and higher secondary students avail of private tuition. For the same category of pupils, the national average is 37.8%. Tripura, a close second at 87%, followed by Bihar (67.2%) and Odisha (63.4%) top the list of states where maximum number of students opt for private coaching. For a similar category of students at the primary level, Tripura (78.3%) replaces West Bengal (71.1%) at the top of the list. Daman and Diu (58.8%), Chandigarh (49.4%), Bihar (46.8%) and Odisha (45%) are the other top states and Union territories where students avail of private tuition. Even in Delhi, 32.2% of the male students and 36.6% of the female students at primary schools avail of private tuition, the NSSO survey showed.

“Private tuition is thriving because the education system in India has deteriorated over the last several years. While quality of teaching has gone down across verticals, the exam system remains the same. The outcome—students and parents will believe in supplementary education like coaching for passing an exam or cracking a competitive exam," said Pramod Maheshwari, chairman and managing director of Career Point Ltd, a listed coaching company based in Kota.

He, however, found it difficult to believe that in Uttar Pradesh, the dependency on private tuition is low. According to the data, in Uttar Pradesh only 12.2% of male students are availing of tuition at primary level and 13.7% in upper primary level as against the national average of 23.1% and 28%, respectively. Similarly, only 15.8% of Uttar Pradesh students avail of coaching at graduation level and 9.5% at postgraduation and above levels are availing of private coaching against the national average of 20.3% and 13%, respectively. 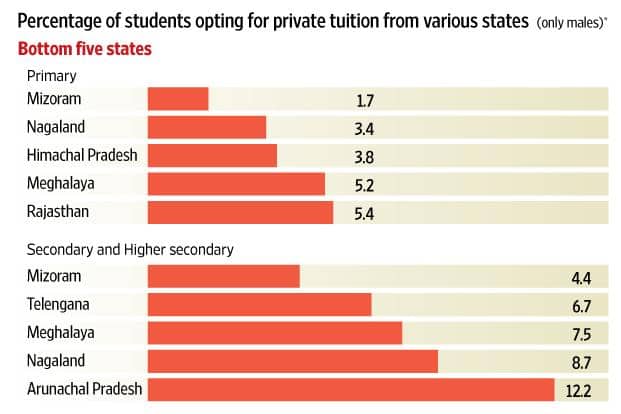 This issue is not India-specific and exists in many developing and developed countries. According to a research paper by Accountability Initiative, part of the Centre for Policy Research think tank, 70% of students in Japan get private tuition by the time they complete middle school; 83% students in Malaysia receive tutoring by the time they reach senior secondary school.