Assam elections: Will BJP pull off an upset?

Rangia/Kamlapur/Barpeta: “I have grown up in my village without power, very little job opportunities and without roads. It has been 15 years for Tarun Gogoi as chief minister and not much has changed. We continue to face the same problems," says 23-year-old Riazuddin Ahmed, a third-year student of political science at Nalbari College and, crucially, also a first-time voter in the ongoing assembly elections in Assam, the first phase of which concluded on Monday.

Ahmed then touches on the issue core to young voters, who account for a substantial section of the electorate: “Why is it that people still have to go to Kolkata, Chennai and Bengaluru to find work? Why is the state government run by the Congress party unable to generate employment opportunities for us in Assam?"

Ahmed, a resident of Pubsahan village in Rangia constituency, located a little over 50km away from state capital Dispur, represents an emerging segment of Muslim voters who are likely to vote, surprisingly though, for the Bharatiya Janata Party (BJP).

Like the rest of the youth of Assam, they seem to be drawn to the message of parivartan or change, the central campaign slogan of the BJP. Whether or not the BJP succeeds in tapping this sentiment, it is at the least severely testing three-term Congress chief minister Tarun Gogoi.

The electoral stakes from this direct face-off holds implications for both the Congress and the BJP. For the former, which is already witnessing a severe erosion of its electoral footprint in north India, a loss in Assam, coming just after its government was toppled by dissidents in Arunachal Pradesh, will once again put the party’s central leadership under scrutiny. It could also potentially encourage dissidents in other state units.

On the other hand, a good showing will not only help the BJP mitigate some of the bad press it has been receiving since the electoral debacle in Bihar, but also reinforce its claim as the new pole of Indian politics.

If the BJP manages to snatch victory—some poll surveys put the party ahead in the race—then it would have created political history. More importantly, the BJP will have emphatically expanded its reach to the north-east, dominated by states in which Hindus, who form the core of the party’s voter base, are a religious minority.

A dominant perception in the run-up to the assembly election has been the inability of Gogoi to connect with the youth—to many, this will be the crucial difference between a record fourth win or a defeat.

“Chief minister Tarun Gogoi has failed to listen to (the) aspirations of the youth, educated, middle class and urban population. Gogoi doesn’t look like a leader to the aspiring class of voters. The popularity of Gogoi has also taken a hit and his son Gaurav Gogoi has not been able to impress the masses," says Arupjyoti Saikia, head and professor of history at the department of humanities and social sciences, Indian Institute of Technology (IIT) Guwahati.

Assam has a total of 126 constituencies with 1.98 crore voters, of which 95 lakh are women. Of the total number of voters, a little under a third are under 30 years and about two-thirds are under 50 years. According to the Election Commission of Assam, there are 6.76 lakh voters in the age group of 18-19 years.

To Gogoi, this composition of the demography, driven by aspirations, leaves his regime particularly vulnerable to anti-incumbency.

“We also have children at home just like chief minister Tarun Gogoi. Just as Congress president Sonia Gandhi would want her son to do well in life, just as Tarun Gogoi wants Gaurav Gogoi to do well, similarly, we also want our children to have a better future. It is not the BJP which is gaining; people like Prime Minister Narendra Modi... people like what he says in his speeches," says Digambar Kolita, a 47-year-old farmer from Kamlapur constituency. 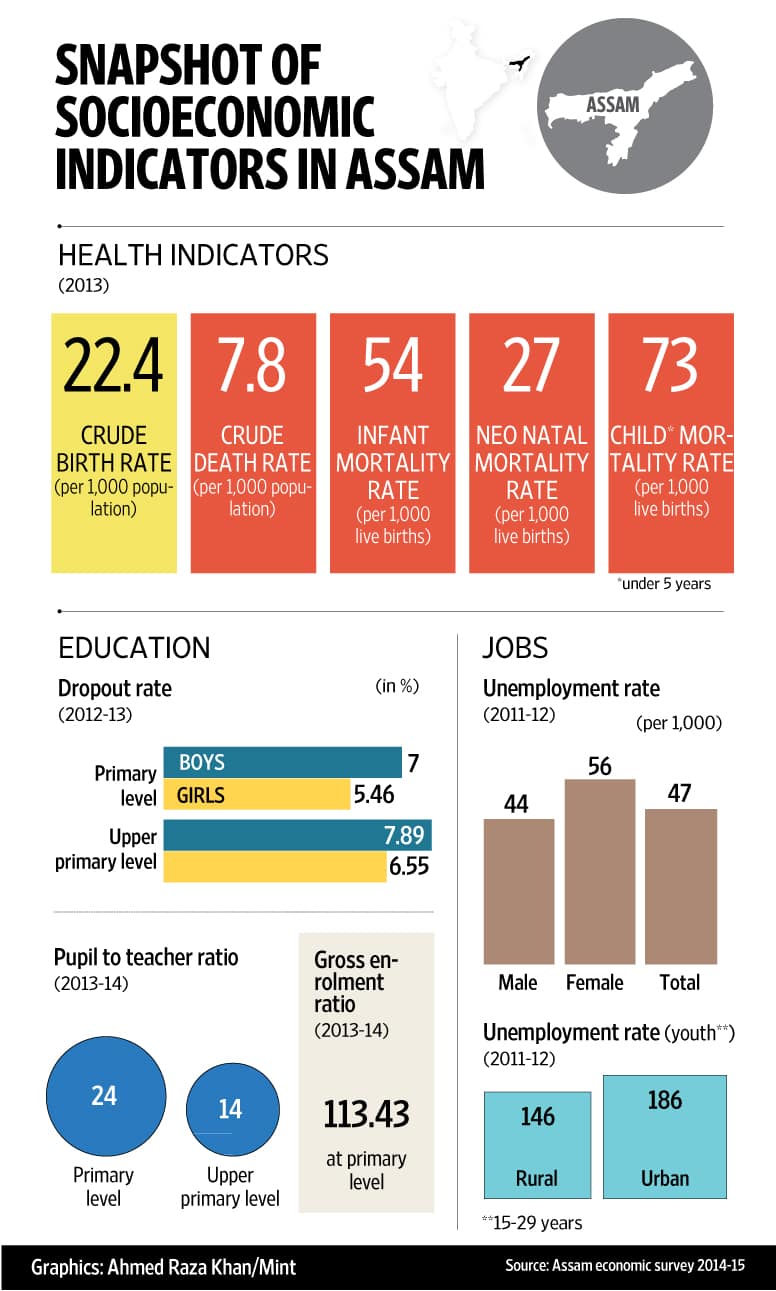 The BJP is contesting 91 seats out of the total 126 seats in Assam, while its alliance partners, Asom Gana Parishad (AGP) and Bodoland People’s Front (BPF), are contesting the rest.

The BJP is hoping to revive the magic of the 2014 general election, when it managed to win a record seven out of 14 Lok Sabha seats. The party has centred its election campaign around development as well as a crackdown on illegal migrants and insurgency—coincidentally, the very themes that inspired the party’s good performance in the 2014 general election.

The biggest challenge for the BJP is the religious composition of the state. A little over a third of the population are Muslims. However, what should hearten the BJP is that there is a visible division among Muslims based on those who speak Assamese and ones whose mother tongue is Bengali. A section of the Assamese-speaking Muslims is being drawn to the BJP’s message of development.

This time around, it has adopted a new strategy. For one, it announced that the chief ministerial candidate would be Sarbananda Sonowal, a leader who has crossed over from the AGP. Second, it continued to play on the popularity of Modi and alongside tap the grassroots popularity of Himanta Biswa Sarma, a senior Congress leader who joined the party ahead of the 2014 general election. And finally, it moved swiftly to nix factionalism, something that had severely undermined the BJP’s electoral prospects previously.

“There is a wave in favour of PM Narendra Modi. He is more popular than the BJP. But the key for BJP’s success is Himanta Biswa Sarma. He has personal loyalty of voters, especially youth. The alliance between BJP and AGP had also started with a tussle, but as the election campaign progressed, things have been sorted out between the two alliance partners. Now, both Sonowal and Sarma have also joined hands to contest and fight this election together," says Pahi Saikia, assistant professor of political science at the department of humanities and social sciences, IIT Guwahati.

Interestingly, both Sonowal and Sarma had started their political career together as student leaders and in this election again, they have joined hands.

At the same time, senior leaders of the AGP also agreed to be low-key, given that the party has been out of power since 2001.

“The authority of some of the prominent leaders of AGP has also diminished over the years," says Pahi Saikia.

Unnati or prosperity of Assam is what 52-year-old Taimuddin, a farmer from Salimpur village in Barpeta constituency, desires from the next government.

“Corruption is hurting prosperity in the state. We want a government which is more accountable and works for development. There is power scarcity in Assam; we hardly get electricity for more than six hours in our village. People go out of Assam in search of jobs. The government which comes to power must address these concerns," he said, adding that the Gogoi government has failed to fulfil the promises it had made in the previous poll campaigns.

Similarly, 56-year-old Rajab Ali Ahmed, a school teacher from Sarukhetri constituency, says, “Change has become inevitable primarily because of (the) unemployment problem, which is a burden on the state. We don’t even get clean drinking water. Unemployment is the biggest burden on the state, so, people are migrating."

Though the Congress has rejected corruption allegations against Gogoi, it believes that Assam is witnessing a historic election because people have to choose between the 15-year track record of Gogoi and a challenger’s promises.

“This is the most important election for Assam. The state government has worked for development of people for 15 years. People who know Assam can see these changes, but those who are coming now to the state because of elections think not much has happened. On one side, there is development of Assam, but BJP and Rashtriya Swayamsevak Sangh are using the message of development as a mask to push the agenda of communal polarization," said senior Congress leader Jairam Ramesh at a press conference in Guwahati.

To exploit the anti-incumbency sentiment, Modi has tweaked his campaign, emphasizing the promise of development rather than personality bashing—like he did in Bihar.

“I have three agendas. Development, fast development and all-round development. I don’t want to waste time fighting an individual. I have no fight with Tarun Gogoi. He is elder to me; he will be 90 years old in a few years. My fight is against poverty, unemployment, corruption, backwardness and Assam’s destruction," Modi said during his election speech in Majuli, the constituency of Sonowal.

Political analysts are convinced that there is a perceptible change in the mindset of the people, inspired largely by the growing number of Assamese migrants into the mainland, and this could be to the advantage of the BJP.

“People want a better life for themselves. Earlier, corruption was not such a big issue, but it has increased in the last few years and legitimate demands of people are not being met," says Pahi Saikia, adding that the rise of the BJP has offered a political option to the electorate.