New Delhi: The central committee of the Communist Party of India (Marxist), or CPM—its apex decision-making body—has approved proposed reforms to initiate greater internal democracy. These proposed changes, unprecedented in the party’s history, would include fixing terms for the general secretary and state secretaries, according to some senior party leaders.

Although general secretary Prakash Karat said “no such move had been taken up yet", other senior party leaders say the proposal is part of the reform agenda. 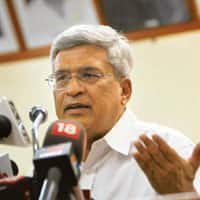 Limits for party office bearers could come as a blow to Karat, now in his second term as general secretary. Among his predecessors, while P. Sundarayya served for three terms, E.M.S. Namboodiripad and Harkishan Singh Surjeet served four terms each. Both Surjeet and Namboodiripad had to step down because of ill-health.

This may also affect the controversial party secretary of its Kerala unit, Pinarayi Vijayan, now serving his fourth term.

The proposals were submitted by the party politburo to the central committee, which met on 23-25 October to finalize the so-called rectification document, which will provide guidelines for ideological, political and organizational “course correction" within the party. These decisions await ratification as part of party doctrine at the next congress in 2011.

“The rectification campaign is not some sort of a purge to remove bad elements from the party, but is a way to correct the political orientation of the party, revitalize it on the basis of our Marxist ideology and overcome any wrong trends within the party," Karat said, adding that these guidelines would first be initiated at the level of the central committee, followed by state and district committees.

The CPM faced a crisis after the defeat in the April-May Lok Sabha elections, when the party’s strength dropped to 16—the lowest ever—from 43 previously.

According to Karat, the rectification document focuses on four key areas, including “strengthening democratic centralism as the organizational principle of the party, ensuring proper integration of parliamentary and extra-parliamentary work, maintenance of communist norms and values and remoulding the outlook of the party members towards upholding progressive values".

According to senior party leaders, some other reforms include the setting up of a party disciplinary committee to address complaints from state units. The decision of the committee would then be put before the central committee for approval.

The party will also develop a mechanism to keep a check on the lifestyles of its cadre—especially the leadership—including their wealth accumulation, with an emphasis on austerity.

Distancing the party from the West Bengal Left Front government’s recent decision to swap women arrested on charges of being Maoist sympathizers with an abducted police officer, Karat said it was up to the state government and the administration to decide what appropriate steps to take. “We cannot take a position on this matter," he said. “It is for the administration there to decide. The government exercised its judgement."