Supreme Court to hear case on Sethu project in October

Supreme Court to hear case on Sethu project in October

New Delhi: The Supreme Court on Friday directed that the litigation over the Sethusamudram shipping channel project be placed before it for hearing in the first week of October. 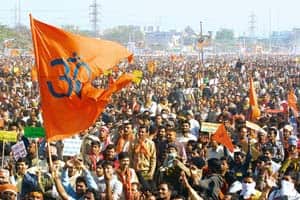 Stiff opposition: A December 2007 photo of a protest in New Delhi against the Sethusamudram shipping channel project. Sanjit Das / Bloomberg

Former parliamentarian Subramanium Swamy moved an application in the apex court on Friday stating that the project was conceived and inaugurated without the shipping ministry conducting a basic tectonic survey and risk analysis about the possible effects of tectonic changes in the Gulf of Manar and Palk Strait, as has been stated by the National Institute of Oceanography (NIO) in a report. He, therefore, requested that the project be scrapped.

The court was moved on grounds that the present alignment would damage the Rama Sethu, which some Hindus believe was constructed by Rama, the hero of Ramayana.

Work on the project has been stalled as the Supreme Court has reserved its order regarding the project and appointed an expert committee headed by environmentalist R.K. Pachauri to advise it on the matter.

The Union government had referred the feasibility study of the project to NIO, which said in its report that available data was inadequate to assess the possible impact of the shipping canal project. The report recommended an environment impact analysis to be carried out “to enable robust conclusions" to estimate the impact and viability of the project.

Although NIO submitted its report in March, the government is yet to make it public. It has not yet placed it before the Supreme Court.

The application by Swamy alleged that because of the negative findings in the NIO report, which could jeopardize the project, the government is not placing the findings before the apex court.

The Friday directive would expedite the adjudication on this controversial issue.