Athens: Greece has admitted it still faces a tough job in persuading the European Union and IMF to save it from bankruptcy even after parliament approved savage extra budget cuts, provoking a night of looting and burning in central Athens. 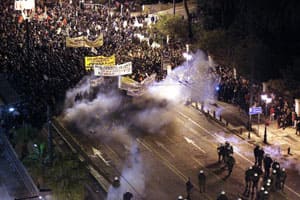 As parliament debated the austerity package on Sunday night, riot police fought running battles with protesters outside. By daybreak on Monday 93 buildings had been wrecked or seriously damaged in the city centre, some of them historic monuments.

The written undertakings are not the only demand euro zone finance ministers have made before they decide whether to approve a €130 billion bailout, part of which Athens must get if it is not to default chaotically when €14.5 billion in debt repayments fall due on 20 March.

Weary of broken Greek promises, the Eurogroup ministers have also told Athens to say how it will fill a €325 million gap in its plan for an extra €3.3 billion in savings this year before they meet in Brussels on Wednesday.

Government spokesman Pantelis Kapsis accepted that Athens had work to do.

“The Eurogroup on Wednesday will obviously be a tough one but the government believes the political leaders’ positions show we are determined to continue," he said.

But comments by Antonis Samaras, who leads the conservative New Democracy party, are unlikely to reassure Europe. He ordered lawmakers from his party, the smaller of the two in the coalition, to vote for the deal but simultaneously made clear he wanted it changed once Greece had avoided bankruptcy.

“I am calling you to vote for the new loan agreement because I want to avoid falling into the abyss, to restore stability, so that we can have the possibility tomorrow to negotiate and change the policy that is being imposed upon us today," he told parliament.

With New Democracy ahead in the polls, Samaras is frontrunner to become prime minister when Papademos steps aside after securing the bailout and a bond swap deal to ease Greece’s huge debt burden. However, Samaras has proved reluctant in the past to give written undertakings to the EU.

Kapsis said the Finance Ministry was working on the problem of a €325 million gap, adding that much remained to be tied up even after the Eurogroup meeting and the bailout memorandum as the 20 March debt repayment date nears.

Greece had to seal the “Private Sector Involvement" (PSI) deal to reduce its debt burden. “The next three weeks will be hellish. The list of actions regarding the PSI and the memorandum is extremely pressing," Kapsis said.

Terms of the PSI, under which private creditors will take a major cut in the value of their Greek government debt holdings, are set to be announced after the Eurogroup meeting, sources familiar with the talks said on Monday.

Greece’s creditors will take a net loss of 70%, two of the sources told Reuters.

Underlining the doubts of Greece’s euro zone partners, Luxembourg Finance Minister Luc Frieden said on Monday that a failure by Greece to meet all the conditions laid down for it would lead to its exit from the euro zone.

Greece may decide it is better to leave the euro zone than to go through with such severe budget cuts, he told the Atlantic Council in Washington.

A sharply devalued currency would give it more flexibility. “It might be something which would allow Greece also to get a new start ... to create an economy that can create jobs. This however is not a scenario that I would prefer," he said.

The euro zone was better prepared now than a year ago to cope with a Greek default and exit from the euro zone, Frieden said, a view echoed by German Finance Minister Wolfgang Schaeuble speaking to the ZDF public broadcaster.

But US rating agency Moody’s, citing growing risks from Europe’s debt crisis and worries about its ability to make needed reforms, downgraded the ratings of six European countries late on Monday and put Britain, France and Austria on negative outlook.

Uncertainty about the resources that will be devoted to tackling the crisis, and Europe’s “increasingly weak macroeconomic prospects" were other factors behind its action, it said.

Many Athens residents fear that Sunday night’s violence may lead to something like the riots in 2008, which spread across the country and lasted for weeks after police shot dead a 15-year-old schoolboy - or something yet worse.

“It is very likely that such protests will be repeated because people are very angry, they are outraged," said Vassilis Korkidis, head of the Greek Commerce Confederation.

“Once again the state didn’t take any precautionary measures, once again Athens was burnt down," he told Reuters. “The damage is estimated at tens of million euros."

Stunned residents gathered at many of the burnt-out shells of shops, arcades, banks and cafes. Fire crews tended to still smoking buildings and workers cleared huge amounts of rubble from roads and pavements after the night of mayhem.

“The social explosion will come one way or another, there is nothing they can do about it any more," he told Reuters.