Paris: Political limbo in Greece over demands for renegotiation of debt rescues puts the country close to the euro zone exit and also poses grave dilemmas for the EU and notably Germany, analysts say.

Since the weekend election which broke the back of the two traditional Greek parties behind the decline into debt and acceptance of conditions for rescues, analysts on financial markets have cast out thoughts on the possible consequences. 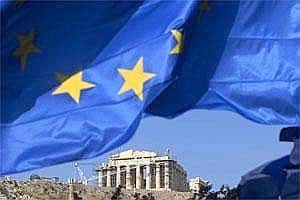 If Greece opted out of the euro zone, it would opt for a “large devaluation, spiralling inflation and a double-digit decline in gross domestic product."

It would also choose “capital controls which will limit any movement of funds offshore" and “bank closures to facilitate re-denomination" and “widespread private sector defaults."

“Meanwhile there is no guarantee that a bank run in Greece, were it to materialise, would not spill over to elsewhere in EMU (the euro zone)," she said.

Analysts agreed that the renewal of debt tension would undermine prospects for growth in Europe.

As political parties in Athens negotiate on the future of their country, and as the economically vital summer tourist season approaches, they also confront the European Union and IMF with a central dilemma.

This is whether and how to compromise on rescue conditions, which new form of guarantees they could obtain in return, and the risk that any deal might undermine the credibility of other rescues and spark calls for renegotiations.

If Greece has to leave the 17-nation euro zone, the effects will make matters worse, probably far worse, for the Greeks, they broadly agree.

For the euro zone and the European Union, the consequences could be severe in terms of renewed tensions in other weak euro zone countries and turmoil as markets adjust, but overall the currency zone could absorb the shock.

However, if the turmoil forced a big euro zone country to seek a rescue, there are doubts about how the EU and IMF bailout funds would cope.

Edgeworth said that with the exception of the ECB, neither the EU nor the IMF had sufficient firewalls in place to deal with any request from Spain for a rescue.

The political effects of Greece leaving the euro zone, and the failure of attempts to keep it solvent, would be highly damaging for the political credibility of the EU, although analysts also say that such a crisis would increase cohesion among the remaining members.

At Capital Economics in London, economist Ben May said that the risks of Greece leaving the euro zone by the end of the year had risen.

Another election and more uncertainty could leave the government without funds to pay immediate bills but default could be avoided if a new election gave the two traditional parties New Democracy and PASOK enough votes to pursue reforms and obtain the next slices of rescue money.

But Capital Economics also warned that new tensions over Greece could hit the high quality of German debt bonds if investors moved out of the euro zone or because of the costs to Germany of preventing a disorderly break-up of the currency bloc.

Analysts at Commerzbank said: “The horror scenario of Greece leaving the single currency might fuel capital flight from other countries of the periphery - which would force the European Central Bank to provide these countries with capital by printing money at an even greater speed."

A few observers have wondered if an acute euro zone crisis might lead stronger countries to weigh the advantages of breaking away.

“The chance of Greece leaving the euro zone risks putting the very idea of Europe into question on the markets," said analysts at French brokerage Aurel BGC.

“Quite clearly, investors will not be encouraged to lend to Portugal, Ireland or even Spain if there’s a risk that one of these countries one day abandons the euro," they said.

However, the head of the rating agency Fitch, Paul Taylor, told the German Spiegel magazine: “If the deutschemark were reintroduced, it would appreciate considerably against other currencies. Export industries, which are the motor of the German economy, would suffer."

He concluded: “Germany isn’t going to tolerate that, even if one or more countries leave the eurozone."

For brokers Oddo in Paris, Bruno Cavalier said that the Greek question was extremely simple: either Greece agreed to lose its remaining sovereignty and apply reforms required by creditors, or it took back its monetary sovereignty and cut its bridges with Europe.

He cited work on the process of accepting fatal disease, by psychologist Elisabeth Kubler-Ross, to the effect that there were four stages from denial, to anger, negotiation and acceptance.

Greece was going through the same process and had to accept a structural inability to live beyond its means on foreign debt, he said.

So far, analysts are not giving much attention to what would happen if there is no compromise over the rescue programme, if Greece does leave the euro zone, but stays in the 27-member EU and needs even more help.