India's richest districts are situated along the western coastline while the poorest are clustered in the easternmost parts of the country, shows analysis

Mumbai: Where do the affluent in India live?

That’s the million dollar question consumer goods firms, marketers, and analysts often struggle to answer because of patchy and unreliable data. For the first time in India, an official data source provides detailed data on household assets and consumer durables that allows us to see how wealth is spread across the country’s districts.

That data source is the National Family Health Survey (NFHS) which surveyed more than 600,000 households in 2015-16. Although the database is used primarily to assess health outcomes, it is in fact a rich source of data on household ownership of assets.

A Mint analysis of the NFHS unit-level data released earlier this year shows that India’s top six urban regions—Delhi NCR, Mumbai-Pune, Chennai, Hyderabad, Kolkata, and Bengaluru—account for 25% of India’s affluent class. The six urban agglomerations together account for a little less than a sixth of the country’s population. Delhi NCR leads the race, accounting for more than 11% of affluent individuals in the country, followed by Mumbai-Pune, which accounts for 5% of affluent individuals in the country. Mumbai-suburban, Thane, and Raigad districts have been considered part of the Mumbai-Pune urban agglomeration.

All estimates have been weighted by the number of individuals in households to account for the differences in household sizes across income classes. Nationally, a little over a quarter of India’s population are affluent based on the criteria described above, a little over a 10th are poor, and the rest fall in the middle-income category.

Most of India’s high-affluence districts are clustered in the south, west, and in north-west India. If you draw an imaginary line through India’s middle, most of the high-affluence districts will lie to the left of that line, while most of the poor districts will lie to the right of that line (see Charts 1A and 1B). An earlier Plain Facts story, based on 2011 census data and using a slightly different set of parameters, had found a similar clustering of districts across the two halves of the country. Half a decade later, the pattern of wealth distribution does not seem to have changed much. 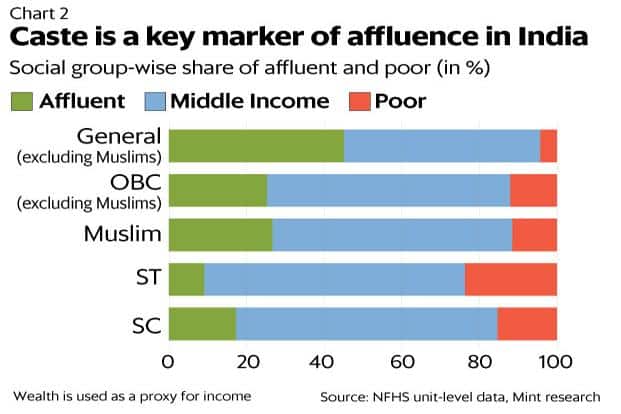 The difference in caste-wise wealth distribution arises at least in part from inequalities in educational opportunities. Education is a big driver of wealth in India (see Chart 3A) and very few of the underprivileged communities have access to education (see Chart 3B). Nearly half of general category households (excluding Muslims) had at least one person who had studied at least till the higher secondary stage. For tribals, the same share was 15% and for Dalits, the same share was 21%. Little wonder then that these communities have had little participation in India’s growth story despite affirmative action. This is the first of a four-part series on India’s new geography of wealth. The second part maps vehicle ownership patterns across the country.