New Delhi:The US, which grants around 80,000 visas every year to Indian students, is still the prime destination for Indians looking at education abroad. But over the past few years, as India seeks to do business with the rest of the world, newer destinations such as Ireland, Germany, Taiwan and Hong Kong are emerging as attractive options for Indians to study overseas.

Courses ranging from master’s programmes in fields such as economics and humanities in the UK to film management, animation and hospitality in Singapore are gaining currency among Indian students. 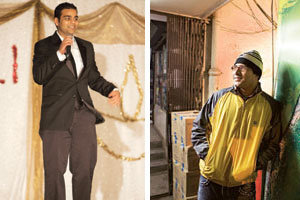 Options galore: Sarvagya Bhatnagar (left), student at University of Louisville, Kentucky, US and Vineet Sharma, who finished his MBA from Taiwan and returned to India to set up his own company.Madhu Kapparath / Mint

Most Indians looking to go abroad do so at the postgraduate level and the most popular choice is a master’s in business administration, according to Amit Rao, who heads the Ahmedabad-based Rao Overseas Consultancy Pvt. Ltd.

But new courses often lead to unconventional career moves once students come back.

Vineet Sharma, who finished his MBA in 2007 from Chung Hua University in Taiwan, returned to India to set up a pneumatic tools importing company. Around 250 Indian students went to Taiwan in 2008, up by 100 students from the year before, according to the India-Taipei Association in Taipei.

Another Indian student abroad, Amrita Mondal, followed a degree from the Delhi School of Economics with a global studies course offered in English by universities in Germany and Austria.

“My experience was royal in terms of learning," says Mondal, who finished her degree in 2007 and now works for a German development organization in Kolkata. “I have really learnt a lot outside of the classroom."

Tanushree Bhattacharya, who heads the New Delhi branch of N&N Chopra Consultants Pvt. Ltd, a firm that helps Indian students select universities abroad, says even if students don’t have any work experience, certain universities in the UK, Australia, Singapore and Ireland are still open to them. Programmes in most of the other countries require work experience, she says, though Canadian schools offer a one-year diploma, and certain pre-MBA courses are available in the US. Sarvagya Bhatnagar, for example, who left Chandigarh in 2004 to pursue his undergraduate study from the University of Louisville in Kentucky, US, landed a student internship with General Electric Co. which led him to an MBA programme in entrepreneurship from the same university.

For many students, the most attractive factor is cost. Business schools in India charge around Rs8 lakh for a two-year postgraduate course but their graduates can expect around Rs4 lakh per year as the starting salary, according to John Gabriel, chief marketing officer at coaching firm IMS Learning Resources Pvt. Ltd.

In Singapore, he says, tuition fees for a one-year programme are roughly the same and a graduate can expect a salary around $2,000 (Rs97,200) per month and can live comfortably in the country while still saving up to $500 per month. “That’s half the salary you are going to draw in India and you complete the course in half the time," says Gabriel.

An MBA in the UK, on the other hand, will cost around Rs15-18 lakh for one year, including living expenses, says Bhattacharya.

Singapore, with a reputation for safety, proximity to India and large Indian population, make it a popular choice, but other countries such as Spain, France and Thailand have also made visas relatively easy to obtain for students.

Some countries such as Singapore and Canada make it easy for international students to stay and provide them a path to permanent resident status.

And governments ranging from Taiwan to the European Union (EU) countries offer full scholarships to attract foreign students to their universities.

The EU-sponsored Erasmus Mundus scholarship, for example, provides funding based on academic merit for citizens of other countries to study at a consortium of schools in continental Europe.

Students in non-English speaking countries do run into language problems but, they say, their hosts try to make the transition easier. Sharma, whose programme was conducted in both English and Chinese, says the professors provided extra tutorials and books and exams in English along with free Mandarin classes.

Consultants say the choice to go abroad isn’t for everyone. “It doesn’t make any sense to go for any second-tier college globally for MBA if you don’t get good options or a good mix of students in a batch," says Career Launcher’s Ganjoo.

But with the number of interested students far outweighing the number of open slots in India, countries outside the US are becoming a more attractive option.

“If the existing universities were to cater to the eligible age group in India," says IMS’ Gabriel, “each universities has to take about 250,000 students. I don’t think we have even one university that can take that."