MNF's Zoramthanga gets absolute majority, winning 26 of the 40 seats in the state

New Delhi: A week before Mizoram went to the polls on 28 November, Zoramthanga, the 74-year-old insurgent-turned-politician heading the Mizo National Front (MNF), had predicted a wave against the ruling Congress government, and in his favour.

He had also gone on to predict a clear majority for his party, formerly an underground secessionist group that gave up arms under the 1986 Mizo peace accord with New Delhi, and has since been in the political mainstream.

On Tuesday, Zoramthanga’s words proved prescient as his MNF cruised to an absolute majority, winning 26 of the 40 seats in the Mizoram Assembly. The Congress suffered one of its worst defeats in decades, winning just five seats, validating another of Zoramthanga’s predictions, that it would not win more than 10 seats.

Spelling as it does the end of Congress rule in Mizoram and perhaps the end of the Lal Thanhawla chapter in state politics, it also speaks of the overall decline of India’s grand old party in the country’s northeast where it had been a dominant political force for decades.

So how did Zoramthanga, who held the post of chief minister for two consecutive terms between 1998 and 2008, propel his MNF to such a victory? Exit polls had predicted a hung assembly with the MNF managing 15-18 seats, three to six seats short of a majority.

“It is simple. The Mizo people were fed up with 10 years of Congress rule that was full of corruption, mismanagement and no development. The people, I think, realised that a regional party that understands Mizo aspirations is what they need," said K. Sangthuama, an MNF party worker in Aizawl. 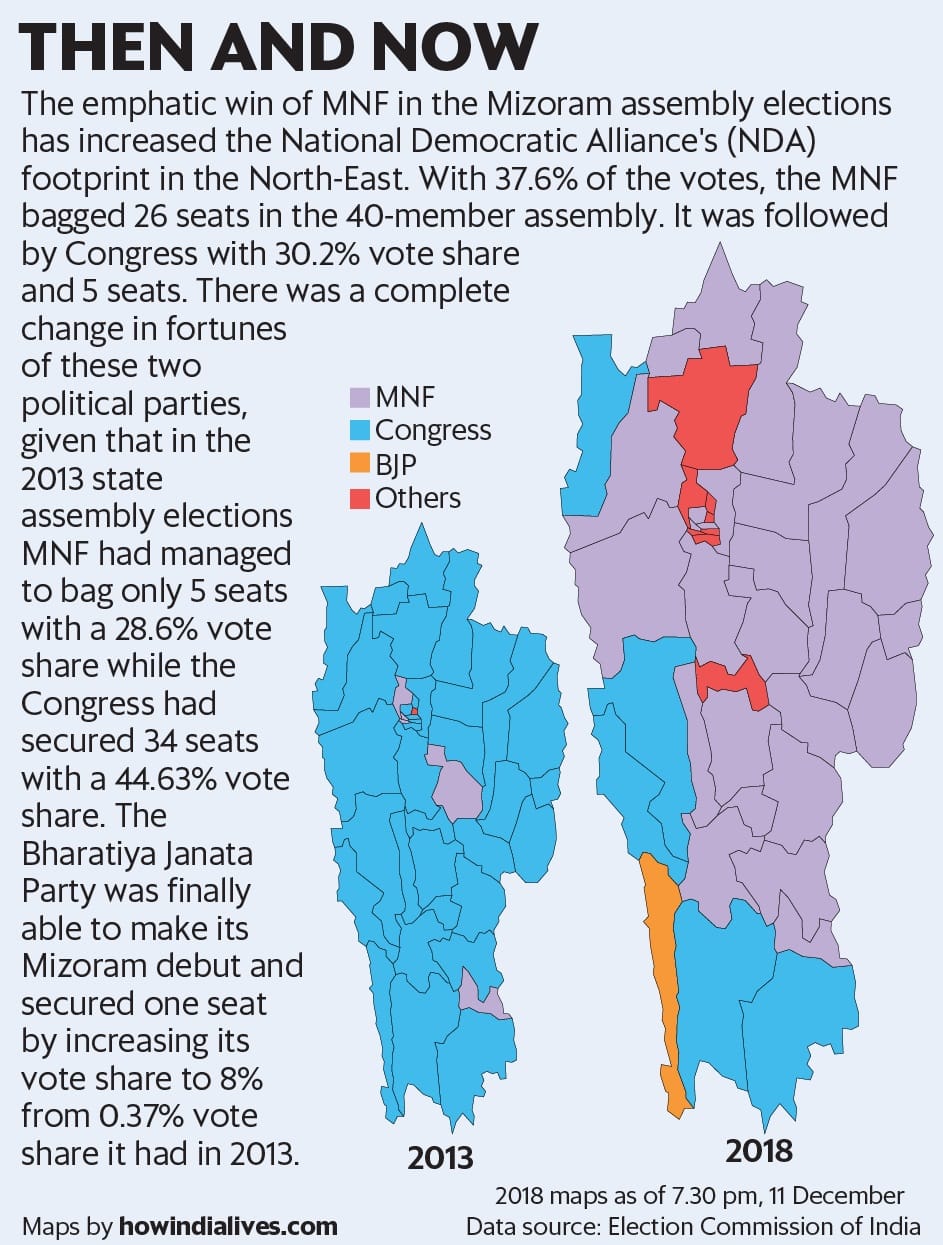 In an interview with Mint last month, Zoramthanga had cited anti-incumbency and the lifting of a 1997 ban imposed on the free sale of liquor by the Congress in 2015 as two of the biggest factors weighing the national party down. “My party and my government will enforce total prohibition," Zoramthanga had then said that economic development and good infrastructure will be priority areas after taking office.

If Tuesday was a day of celebration for the MNF, it was a day of introspection for the Congress, especially with five-time chief minister Lal Thanhawla suffering his worst defeat in decades, losing both seats that he contested from—Champhai South and Serchhip.

In 1998, when the MNF had first won state polls outright, the Congress had bagged six seats with a vote share of 29.77%, according to data on the Election Commission of India website.

With today’s defeat, the Congress has lost its last bastion in the North-East, as Mizoram joined the ranks of Assam, Meghalaya, Arunachal Pradesh and Manipur—states that are either ruled directly by the nationally-ruling BJP, or in alliance with a regional partner.

To be sure, the Congress was never expected to repeat its 2013 election results in 2018. Five years ago, the party had notched up its best tally–bagging 34 out of 40 assembly seats. This was on the back of the Congress winning the 2008 polls with 32 seats. Ahead of the 28 November vote, Lal Thanhawla had presented a picture of confidence, stating that the party would come back to power for a third time with a “comfortable majority."

However, things seemed to go badly for the party with key leaders joining the MNF and the BJP. Despite this, Congress leaders in New Delhi gave him a free hand in distributing tickets and directing the campaign.