Two exit polls, conducted by JanKiBaat-NewsX and AxisMyIndia have tipped the BJP alliance to win the Tripura elections while CVoter has predicted a close fight, but for the ruling Left Front to come ahead

Another exit poll, by CVoter, predicts a close fight, but with the incumbent Left Front winning again. 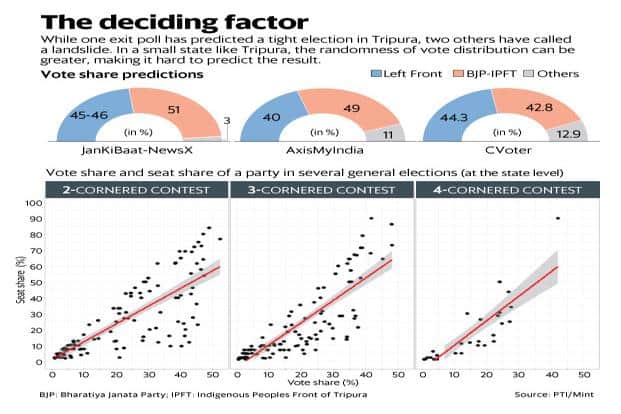 The interesting thing about all three exit polls, based on a report in Mint on Tuesday, is that they are forecasting a straight fight between the Left Front and the BJP-IPFT alliance.

The CVoter poll predicts a 7.2%vote share for the Congress, while the other two polls have grouped the party with “Others", predicting it will get a low vote share.

In the past, when individual polling agencies have got exit polls for state elections wrong, they have in general done a better job of predicting vote shares.

From that perspective, the best way to interpret the Tripura exit poll results by the three agencies is to identify the “consensus view", which in this case is the fact that the polls are a two-cornered contest between the Left Front and the BJP-IPFT alliance, and that it is likely to be a rather close contest between the two alliances.

That said, the conclusion by JanKiBaat-NewsX and AxisMyIndia that the BJP-IPFT alliance will win is rather bold. Back in early 2014, Election Metrics had analysed several general elections in India (at the state level) to show that in a two-cornered contest, small margins in vote shares can lead to big differences in seats.

We’ve seen cases of parties getting over 40% votes and ending up with a handful of seats, and other cases of similar vote share leading to a landslide win.

Sometimes, the party with higher vote share need not be the winner. In other words, in a straight close fight, the identity of the winning party is determined primarily by the distribution of the votes. And in a small state like Tripura, the randomness of vote distribution can be further amplified.

What all this implies is that the Tripura elections are going to be extremely hard to call. It is interesting to note that one agency has called a tight election while two others have called a landslide. We’ll only know once the votes are counted on 3 March.