Young India as a political constituency

If we were to set the cutoff at 35 years, then a whopping 47% of eligible voters in next year’s election will be aged 35 or below

Given the so-called demographic dividend, one question that some analysts have been asking is whether the youth of India can form a constituency by themselves. Since the Census of India Organisation has just released single-year age data, it affords us a chance to look at this.

The data released is from Census 2011. Let us assume that everyone who is 15 and above in 2011 will be eligible to vote in next year’s elections. That gives us a total voter population of 830 million. Of this, 290 million voters will be aged 30 or below at the time of election next year, or 35% of total eligible voters. If we were to be more liberal about the definition of youth and set the cutoff at 35 years, then a whopping 47% of eligible voters in next year’s national election will be aged 35 or below.

Of course, factors such as enrolment of young voters and willingness of young voters to cast their ballots are going to play a part, but the data shows that if a political party or coalition were to form an agenda targeted solely at the youth (those aged between 18 and 35 at the time of voting), there is a good chance that such a coalition might deliver victory.

As is usual with all Election Metrics analysis, we will look at this data state-wise. The accompanying table has the figures on the proportion of eligible voting population belonging to the 18-35 age group in each state. 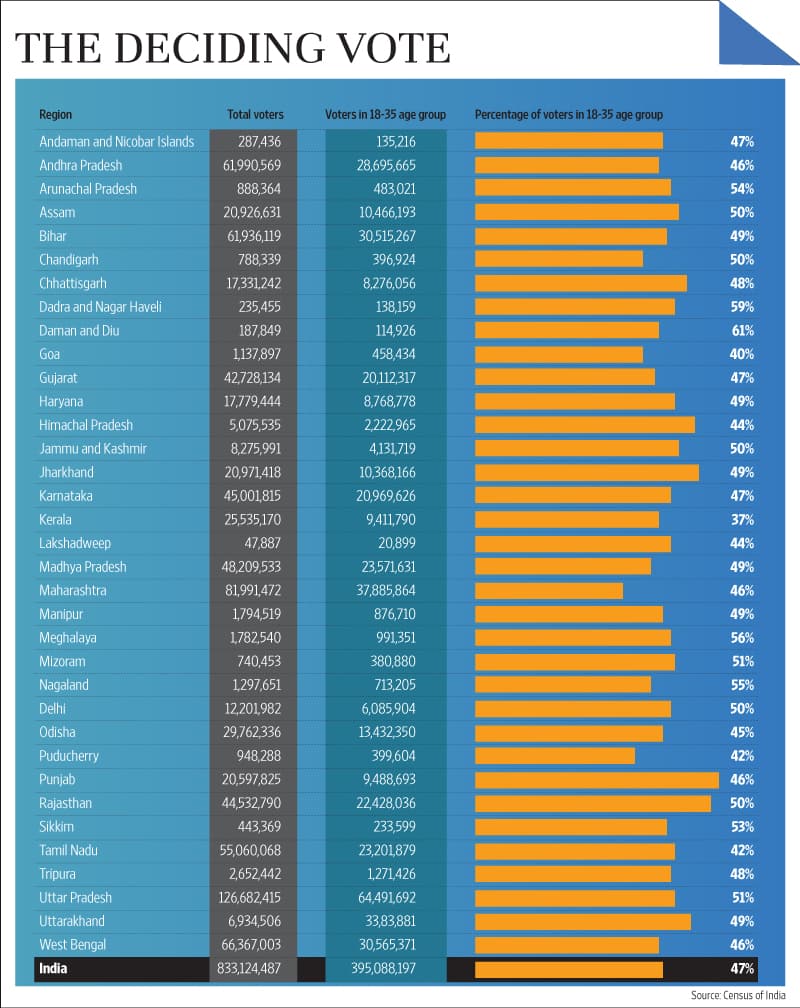 It is interesting that states such as Kerala, Goa, Tamil Nadu and Himachal Pradesh, which are generally considered among the states with superior human development indicators, are at the bottom of this pile. It is probably a consequence of sustained family planning over the years in these states.

It would be interesting to see if any parties actually bite the bullet and come up with a manifesto aimed at the youth. The numbers are there. It is only a question of will and implementation.

Finally, a note about the numbers. For the purpose of simplicity, I’m assuming that everyone who was counted in Census 2011 will be alive in 2014. However, it is well-known that the older an individual gets, the more likely that person might die, so the data actually underestimates the proportion of voters in the 18-35 age group in next year’s election. However, we checked the survival probabilities given in the mortality tables published by the Insurance Regulatory and Development Authority (Irda), and that factor doesn’t have a huge impact on this number because it grows just one percentage point from 47% to 48%.