New Delhi/Bangalore: The government will monetize the appreciation in real estate along Metro corridors through a special property tax. 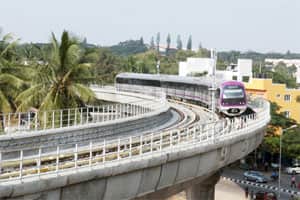 The Union ministry of urban development (MoUD) has advised the state to increase the floor area ratio (FAR) along Metro corridors and levy additional FAR charges to support the funding of the Metro through a dedicated urban infrastructure fund.

FAR, also known as floor space index (FSI) in some parts of the country, is a measure of the extent of construction permissible on a given plot of land.

The tax is among the measures being adopted by the ministry and the Delhi government to raise funds for the Metro and reduce the funding pressure on the Centre and the state, Sudhir Krishna, secretary, MoUD, told reporters on Tuesday.

“We are encouraging mixed land use and higher floor area ratios along the Metro corridors to enhance economic activity," Krishna said. “Through a property tax (on properties) along the Metro, we will try to mobilize resources to fund the future phases of the Metro."

Property analysts said rental and capital values of property along Metro corridors escalated in Delhi as well as in Bangalore, where the Metro rail was opened to the public only last year. The Delhi Metro became operational in 2002.

Residential prices have grown by 15-20% along Bangalore’s Old Madras Road, where the first leg of the Metro commences.

Cashing in on the demand for property close to Metro stations, a clutch of real estate projects were launched last year by large developers on an extension of Old Madras Road.

The government’s move will curtail the holding of property as assets and thus more housing will open up for the rental market, said Romi Roy, senior consultant, Unified Traffic and Transportation Infrastructure (Planning and Engineering) Centre, a unit of the Delhi Development Authority.

“Now people will think before they sell property and only those who really need the Metro will live near it. It is a welcome move by the ministry," she said.

Similarly, in Bangalore, there are multiple proposals to levy a property tax that the state government is toying with to take advantage of the growth in capital values that is expected along the Metro corridor, said K.M. Shivakumar, additional chief secretary, urban development department, Karnataka government.

“If property values are going up, the government or the implementation agency should also partially benefit because the capital will eventually be infused for the project itself," said Shivakumar.

In the second phase of the Bangalore Metro, which is yet to be approved by the central government, the new tax may be levied on properties located within 500m of each Metro station.

Chintan Patel, director of real estate and hospitality services at consultancy Ernst and Young, said if the initiative is aimed at monetizing the rise in real estate values because of the Metro, the money needs to be ploughed back into the transport project. “It also needs to be seen if the tax is a one-time payment against a transaction or it is payable annually like the regular property tax. Of course, the amount of this new tax will also decide the growth potential of capital values in these areas and may be, (they will) keep prices in check," Patel said.