Thanks for Visiting Mint
You seem to have an Ad Blocker on. Please turn it off in order to continue, or whitelist Mint
HOW TO TURN OFF AD BLOCKER
OR
REFRESH IF YOU ALREADY TURNED OFF THE AD BLOCKER
Home >Politics >Policy >What Maharashtra Wants | Part II

Election Metrics analyses in charts the impact young voters, and urban and rural poor can have in Maharashtra assembly elections

The Association of Democratic Reforms (ADR), in association with Daksh, a not-for-profit organization, has conducted a survey of over 20,000 respondents across all constituencies of Maharashtra, which elects a new legislative assembly on 15 October.

The survey collects demographic information of respondents along with their ratings on the relative importance of various issues in the lead-up to the election. Respondents have also rated the performance of their sitting legislators on these issues in the past five years. This is in line with similar surveys done by ADR and Daksh in the lead-up to the Lok Sabha election earlier this year, and other state elections prior to that.

What excites Election Metrics is that this data can be used to compare and contrast priorities accorded by voters belonging to different classes to different sets of issues. Every day, till the day of the Maharashtra elections, we will pick up two different groups of voters in the state, and understand the relative importance of different factors for them.

The data for the following visualization comes from the ADR-Daksh survey, but has been normalized and scaled so that it is easily comparable. Each column represents the priorities given by the two groups (mentioned below) for different issues. The vertical distance between two issues in a column is representative of the relative preference for the group for one issue over another.

THE YOUNG AND NOT SO YOUNG

One of the narratives of the recent Lok Sabha election was that the young voter’s needs are different from the earlier generation’s needs. What does data from Maharashtra show? We divide voters into two age groups—less than or equal to 35, and above 35, and compare their relative priorities.

There might be a selection bias in the data, as older respondents seem more inclined towards farm-related issues while the higher priorities of the younger respondents are more urban. Inflation and defence are two issues which concern the young more than the not-so-young. 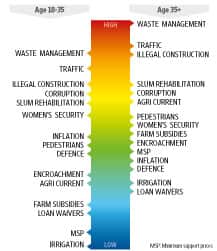 THE RURAL VERSUS THE URBAN POOR

The ADR-Daksh survey asks respondents to classify themselves into a socio-economic category—choices include BPL (below poverty line), poor, middle class, upper middle class and rich. The respondent’s location is also captured. In the chart below, we will compare the priorities of the rural and urban poor (those that define themselves as either “poor" or “BPL").

It is interesting to note that the rural poor find corruption to be a bigger problem than the urban poor. The urban poor’s priorities also seem more inclined towards public goods—such as defence, roads, drinking water, education, response to terrorism, etc. It must be mentioned here that factors that are recorded only for rural respondents (such as agriculture-related factors) and those that are recorded only for urban respondents (such as city infrastructure-related factors) have been left out of the above chart. 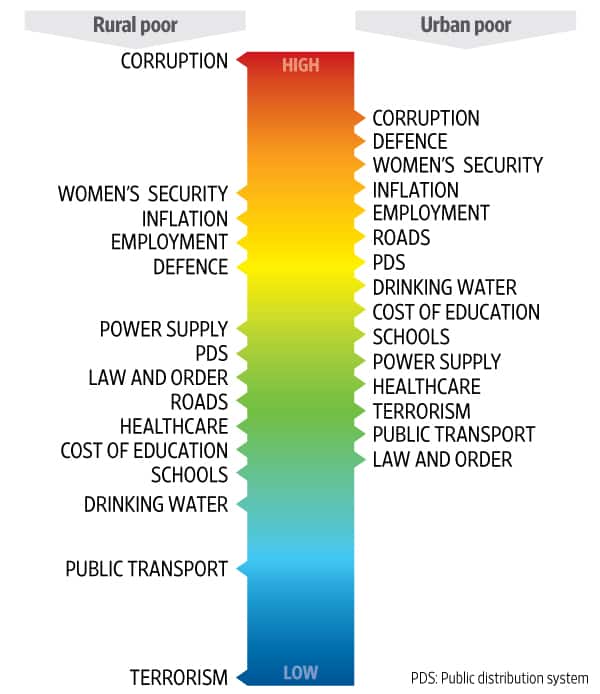