The true worth of a senior advocate

As reported in Mint on 8 September, senior advocates charge anywhere between ₹ 75,000 and ₹ 16.5 lakh per hearing in the Supreme Court, and many appear in several matters per day.

But what is the actual value of a senior advocate in a case?

Research by the Vidhi Centre for Legal Policy has revealed that a special leave petition (SLP) being argued by a senior advocate has roughly double the chances of being heard by the Supreme Court, compared with cases without a senior advocate.

With nearly 71,000 cases filed for admission in the Supreme Court in 2014, of which about half (34,500) were SLPs relating to civil cases, according to the apex court’s own numbers, that apparent shifting of the odds in favour of the petitioner is hugely significant.

An SLP filed under Article 136 of the Constitution is essentially a plea to the court to exercise its discretion to hear an appeal against the judgment of any one of India’s 24 high courts.

Every Monday and Friday in the Supreme Court is a “miscellaneous day" where such SLPs are listed for the first time, and advocates have about five minutes on an average to convince a bench of two judges that there’s something wrong with the judgment of the high court they are appealing from, and that their appeal or petition is “special" enough for the Supreme Court to spend its time hearing it.

In many ways, the first hearing of an SLP is ideal for analysing the effectiveness of senior advocates, since there are generally only two possible outcomes to an SLP: either the matter is dismissed or a notice is issued. And in most SLPs, only the petitioner is represented by a lawyer.

If the court wishes to take up this case for further hearing, it issues notice to the other party and the case joins the list of more than 60,000 pending cases in the Supreme Court.

For clients and their advisors, the SLP is therefore often the only remaining avenue of appeal within the judicial system, if unhappy with a high court’s decision. 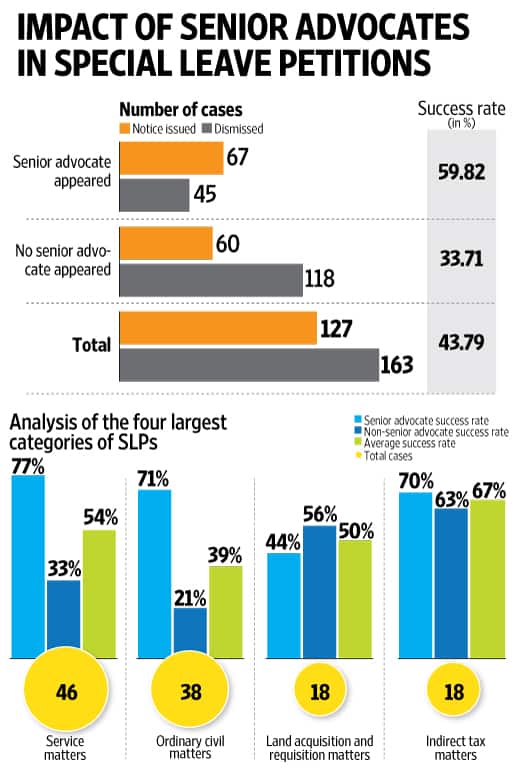 Since so much rests on such a short window of time to get an SLP admitted, it’s easy to see why senior advocates are so expensive and why many clients appear happy to pay those rates.

Vidhi Centre for Legal Policy, based on software written by developer Nigel Babu, is in the process of collecting information on all cases from the Supreme Court website and collating it in a manner that can be usefully analysed. Out of the 34,500 civil SLPs in 2014, Vidhi selected 378 SLPs at random where a lawyer was only appearing for the petitioner. Of these 378 cases, orders relating to the first date of hearing had been uploaded on the website in only 290 cases, despite nearly eight to 16 months having passed between hearings.

Analysis of the orders passed in these 290 cases shows a stark contrast between the success rates of senior advocates compared to non-senior advocates.

The average odds of success for a civil SLP in the Supreme Court, according to that data, is just under 44%.

The eventual fate of the SLPs that make it to court will be decided in years to come.

As of August 2015, Vidhi’s data suggests that out of the 127 SLPs admitted, about 18% (23 cases) have already been disposed of by the court. How long the others will take and stay pending is another matter.

A correlation between the appearance of senior advocates and success in getting an SLP admitted is not necessarily equal to causation by the senior tag itself. Luthra & Luthra Law Offices’s New Delhi-based litigation partner Vijay Sondhi points out that compared to some non-senior advocates, many senior advocates may simply be better prepared and have far more experience of the law and of arguing in court.

Indeed, some of the most senior and respected members of the bar, such as Ram Jethmalani, who celebrated his 92nd birthday on Monday, or 84-year-old K.K. Venugopal, are more senior than even the oldest Supreme Court judges, who have to retire by their 65th birthday.

It is also possible to argue that, in general, senior advocates tend to be appointed in higher-stake matters by richer clients or big companies, which can brief a major law firm that will spend many lawyer-hours preparing the case files to optimize the chances of success before a miscellaneous day.

The senior counsel may just be the cherry on top.

Less well-off individuals’ SLPs may, by contrast, sometimes be little more than last-ditch attempts by litigants who have spent years fighting in lower courts.

However, success rates of senior advocates are not just above average in high-stake matters, where they are traditionally instructed by corporate entities.

In “service matters", for instance, which relate to government servants’ appointment/dismissal/conditions of service, notice was issued in 25 cases and dismissed in 21. Some of these petitioners might not always be able to afford the high rates of a senior counsel individually, but they often approach the court jointly and may pool resources for a senior counsel.

So, in 22 service-matter SLPs that seniors appeared in, notice was issued in 17 cases or 77%, compared to only 33% in cases where non-seniors appeared.

In 38 ordinary civil matters analysed, the difference was even starker, with senior-advocate-fielded cases seeing a 71% success rate versus only 21% where no senior was present.

The data seems to confirm what is commonly believed by lawyers in the Supreme Court and elsewhere: engaging a senior advocate seems to increase the likelihood of notice getting issued by the court in a given case, though predicting which case will be successful and which won’t remains impossible.

This data does confirm the impression, as stated by Marc Galanter and Nicholas Robinson in their 2013 article for the Harvard Law and Policy Review that “the reputational capital of the Grand Advocate remains one of his primary assets in a court system marked by overwhelmed judges with little assistance, the multiplicity and blurriness of precedent, and the centrality of oral presentation".

Yet, senior advocates seem to wield disproportionate influence on how the Supreme Court exercises its discretion.

As Galanter and Robinson pointed out, unlike the Queen’s Counsel (QC) in the UK, who form 10% of the profession, senior advocates in India are less than 1% of the bar and, as some lawyers have said, gives the impression of a cartel that trades less on case law and more on “face value".

Alok Prasanna Kumar is a senior resident fellow at the Vidhi Centre for Legal Policy.

Anisha Sharma, D.Phil candidate in Economics at University of Oxford and professor at the Ashoka University; Shubaprada Mohanty and Shubham Jain, interns at Vidhi Centre for Legal Policy; and software developer Nigel Babu contributed to this story.