New Delhi: For up to 12 hours a day, Akshay Kaushik has a smile on his face and a lilt in his voice.

60bcbe46-37ae-11dd-897d-000b5dabf613.flvAnd if that sounds exhausting, Kaushik, 21, a front office manager in training at the Taj Palace in Delhi, is more than happy to do it. On a stipend of Rs10,000 a month, Kaushik, a recent graduate of the Institute of Hotel Management, Catering Technology and Applied Nutrition (IHM), New Delhi, has a much coveted position among the thousands of hospitality graduates across the country.

The number of job vacancies in the hospitality industry is many, but employment with top notch companies, such as the Taj group, are harder to get, said Kaushik. According to D.D. Sharma, head of accommodation and front office training at IHM in Delhi, there will be a 45% increase in the number of five-star hotels in the Capital in the next two years. In other metropolitan cities such as Bangalore, Mumbai and Kolkata, there will be a growth of 25% in the hospitality industry by 2010, added Sharma.

And that means a need for skilled employees—and the institutes that train them.

“This is the golden period for recruitment," said Sharma. “Yet we’re still running short of trained manpower."

With the Commonwealth Games approaching fast, all sectors within the hospitality, including hotels, are expected to grow. But there are challenges the hotel industry faces, namely, attrition and skilled employees. Many employees, said experts, are leaving hotels for other hospitality sectors that pay more, such as airlines and cruise liners. Some are even going abroad to West Asia and Europe.

According to the Associated Chambers of Commerce and Industry of India, or Assocham, the attrition rate in the hospitality industry is set to double to nearly 50% from the current 25% on account of the Commonwealth Games, which will fuel a huge demand for trained and skilled personnel in the next few years. The chamber estimates that the Commonwealth Games will create job opportunities for approximately 50,000 skilled professionals, and around 70 hotels are likely to be commissioned in the next three years, assuming each hotel will need approximately 600 workers.

“There’s a clear gap in demand and supply and the biggest challenge we are facing is human resources—trained professionals to run hotels," he said. “An entry-level graduate in a BPO might make Rs12,000-15,000 per month, while a graduate from a non top tier hospitality programme might make only Rs5,000-8,000 per month." 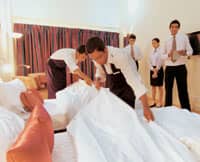 Acquiring skills: Students undergoing training at the Institute of Hotel Management in Bangalore

The Indian tourism and hospitality industry is doing well, driven by the increase in both business and leisure travel by domestic and foreign tourists. In fact, the country’s travel and tourism industry is expected to generate approximately $100 billion (Rs4.28 trillion) in 2008, rising to $275.5 billion by 2018, according to the latest Tourism Satellite Accounting research released by the World Travel and Tourism Council (WTTC).

Programmes such as those conducted by Oberoi Centre of Learning and Development (OCLD) have taken this into consideration. The competition for admission into this school, however, is stiff.

Only 80-100 students are selected every year, and last year more than 4,000 candidates applied for the course, said Rohit Dar, general manager of learning and development at OCLD. That means it’s easier to get into Harvard Law School, which has an acceptance rate of around 11%, than into OCLD.

Each year, in September and October, recruitment days are organized at all Oberoi and Trident hotels.

After four rounds of interviews and a national qualifying examination, in January the successful few are invited to Delhi for the finals.

Training takes place at The Maidens hotel in Delhi. Three two-year postgraduate diploma programmes are offered in guest service management, housekeeping management and kitchen management. “We are in search of people who really like people," said Dar.

“Candidates must demonstrate that they have a passion for assisting people, solvingtheir problems, anticipating their needs and exceeding their expectations. Candidates must be people who have the right attitude, determination and motivation, tempered with pragmatism and a realistic ambition."

And unlike other training institutes, OCLD does not charge its students a fee. Those selected, said Dar, are paid a stipend and provided hostel accommodations. There is no bond that on completing the course associates must work with the Oberoi Group.

However, said Dar, associates are aware that the group is making a significant investment in their future and most often accept a moral obligation to repay that investment with loyalty, commitment and performance.

So many training schools, he said, are setting up shop, but very few have any quality checks. The upcoming Commonwealth Games, he said, will be an opportunity in addition to a challenge.

“You need a whole service team—people with the right service attitude, and this goes way beyond hotels," he said. “It’s the entire service sector, anywhere where interactions with customers take place. The government needs to wake up and address this issue because it really has to be done on a large scale."