Green energy’s moment under the sun

Although India is far from achieving its target of 175 gigawatts (GW) of renewable power by 2022, a series of steps taken by the National Democratic Alliance (NDA) government in the past year has set India on the path to a green economy in the next few years.

India started moving towards green power when the Union cabinet in June 2015 scaled up the country’s targeted solar power capacity under the National Solar Mission fivefold to 100,000 megawatts (MW) 2022 from the earlier 20,000MW.

Later, in the run-up to the 2015 Paris Climate Agreement in December, India announced its Intended Nationally Determined Contributions (INDCs) to combat climate change, where it promised to achieve 175GW of renewable power—100GW from solar, 60GW from wind, 10GW from bio-power and 5GW from small hydropower—by 2022.

The huge target has attracted attention the world over. Piyush Goyal, minister for new and renewable energy, also made his intentions clear, saying that India will lead the world in clean energy rather than follow it.

“With 21GW of grid-connected new solar projects out in the market, India has signalled to the world that we’re ready to lead," Goyal said.

Experts, too, commend the government for huge strides it has made—even if some of them are just in the policy stage right now.

“Definitely, the Indian government has taken some steps to move towards a greener economy including the enhanced solar mission, energy efficiency programmes and move to advance Bharat Stage VI emission norms (for vehicles) to April 2020 among others. They have also improved emission standards for coal-based power plants," said Rakesh Kamal, senior programme manager, climate change at the Centre for Science and Environment, a Delhi-based environmental think tank. 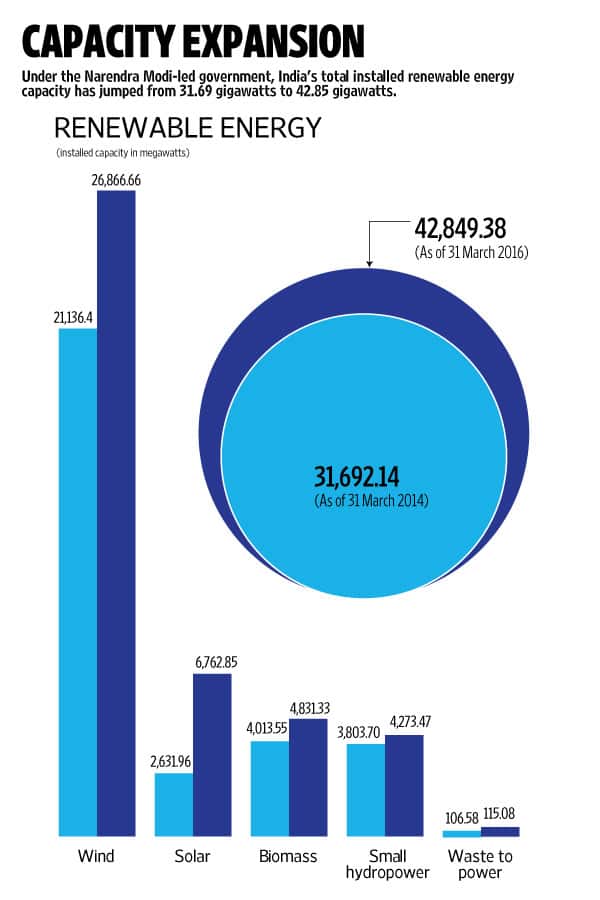 “The seeds for these steps were planted in previous governments. But the present regime deserves credit for enhancing it many times... There is no doubt about that," Kamal added.

As of 30 April, India’s total installed renewable capacity is 42.8GW, of which wind power is 26.8GW, followed by solar with 6.7GW, biomass power with 4.9GW and small hydro projects with 4.2GW.

Finance minister Arun Jaitley’s decision to increase the “Clean Energy Cess" levied on coal, lignite and peat from 200 per tonne to 400 per tonne was another such step. The cess was renamed “Clean Environment Cess".

Though solar power has been one of the main focus areas of the government, it has not entirely ignored other renewable power sources.

India is an important player in wind power and has a huge potential. For instance, as per government estimates, India has the potential to generate 302GW of onshore wind power, compared to the 27GW it currently generates.

Though offshore wind is still a few years away—at present, costs are too high and it is difficult to maintain—it too has a huge potential. According to government estimates, the Gujarat coast alone has the potential to generate around 106GW of offshore wind energy, while Tamil Nadu can generate another 60GW.

“Transition of energy sector is going to take much longer than five years. But what this government has done is to dream big and set ambitious targets. They certainly deserve credit for that. We should grant that they have taken the right step for renewable energy," said Karthik Ganesan, who is a senior research associate at the Council on Energy, Environment and Water (CEEW), a Delhi-based policy research institute.

Ganesan, however, cautioned that setting big targets isn’t enough—they need to be backed by proper mechanisms.

The push for achieving 40% installed power capacity from renewable energy by 2030 has also led to positive developments, like the central government encouraging the manufacturing of solar panels in India. The solar sector alone requires an investment of around ₹ 6.5 trillion to achieve the 100GW target for 2022.

However, the government’s efforts to move towards a green economy are not limited to renewable power alone. The ministry of new and renewable energy under Goyal has been successfully running a scheme to promote LED bulbs across India in a bid to improve energy efficiency.

Under its UJALA (Unnat Jyoti by Affordable LEDs for All) scheme, the ministry is aiming to replace 770 million incandescent lamps with LED bulbs across the country by March 2019. The lifespan of LED bulbs is estimated to be almost 50 times that of ordinary bulbs and 8-10 times that of compact fluorescent lamps (CFLs). Besides energy savings, LEDs also help reduce thousands of tonnes of carbon emissions per day.