Why PhDs want to be peons

Last year, 2.3 million people, including postgraduates and PhDs, applied for 368 peon posts advertised in Uttar Pradesh. Outrage followed. Why were highly educated people applying for a job which required only primary school education and knowing how to ride a bicycle, people asked.

To answer, one needs to find out the jobs people who have been through a university end up in.

NSSO has 10 broad categories of employment in India. Among these, the share of workers who are graduates or more is highest in the professionals category. Broadly speaking, professionals include physical, mathematical, engineering, medical sciences, teaching and other professionals.

Although there is no data on earnings by employment categories, an examination of average monthly per capita consumption expenditure and relative share in consumption (share in total consumption divided by share in population) shows professionals as the most well-off among all categories of workers. 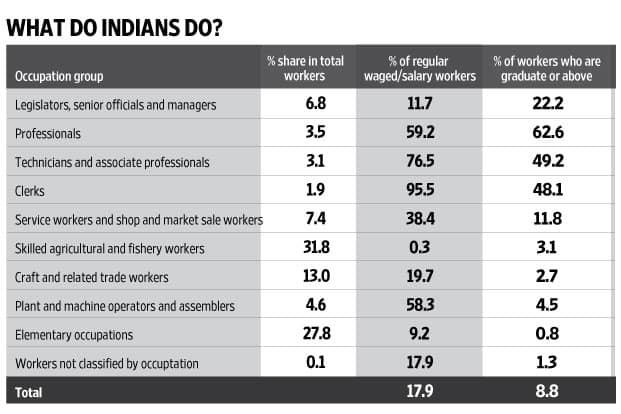 As the analysis above shows, it is safe to assume that professionals have it the best among workers in India. Among these, 9.32 million are graduates or more. 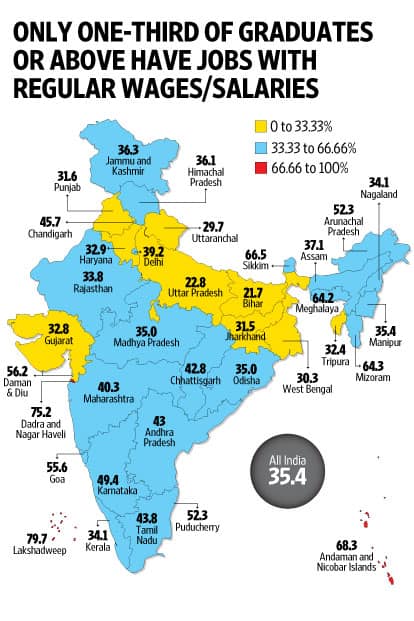 Not all with university education enter the labour market. A significant proportion opts out of the labour force, which means they stop looking for a job. The share of such people is as high as 38% and 26% among graduates and postgraduates, respectively. Reasons for doing so vary and include the pursuit of higher studies, engagement in domestic work, disability, being rentiers, pensioners, remittance recipients, or engaging in free collection of goods.

As is to be expected, more women opt out of the labour force for tending to domestic duties. However, what is intriguing is more women report doing so to pursue higher education as well. Jayan Jose Thomas, assistant professor of economics at IIT Delhi, explains this as a characteristic feature of India’s labour economy. Women from poor households join the workforce to make ends meet, but as economic conditions improve, they opt out due to dearth of quality employment, says Thomas.

These findings raise questions over the effectiveness of the recent increase in enrolment of girl students, reported by Mint last year, in improving their economic condition.

India’s universities and labour markets are also characterized by inequalities on account of both religious and caste groups. We have measured this by taking relative shares of each religious and social group among those who are graduates and more, and professionals. These shares have been calculated by dividing the percentage share of each group in the graduate-and-more/professional population by their respective share in population.

A relative share of less than one would mean that a given group’s share among graduates-or-more/professionals is less than its share in population and vice versa. Muslims, Scheduled Tribes, Scheduled Castes and Other Backward Classes have a relative share of less than one in both the graduate-and-more and professional categories, which reflects their deprivation in education and quality employment. Simply put, the number of Muslim, Scheduled Tribe, Scheduled Caste and Other Backward Class people that are graduates and more or professionals is not commensurate with their share of the total population. 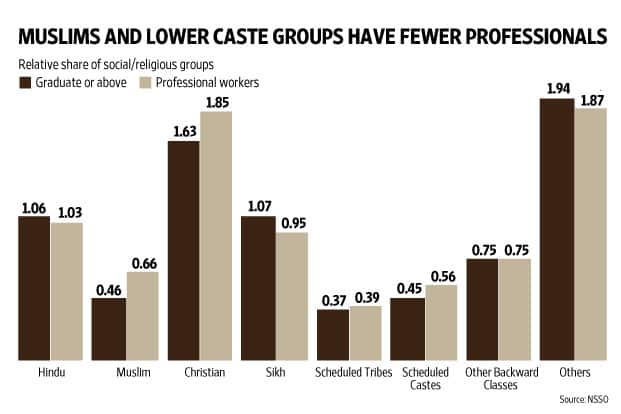 Overall, employment prospects aren’t exactly brilliant for a majority of those who manage to get into a university. Matters are worse for those who come from disadvantaged backgrounds. If India has to exploit its demographic advantage, efforts must be taken to create more quality jobs as well as improve the quality of education in an egalitarian manner.

Roshan Kishore and Dipti Jain are data journalists at Mint.Ishan Anand is a PhD student at Jawaharlal Nehru University.