New Delhi: The national rural employment guarantee scheme saw a record expenditure of Rs63,887 crore in 2017-18, the highest since it was launched 12 years ago, showed data provided by the government on Monday. 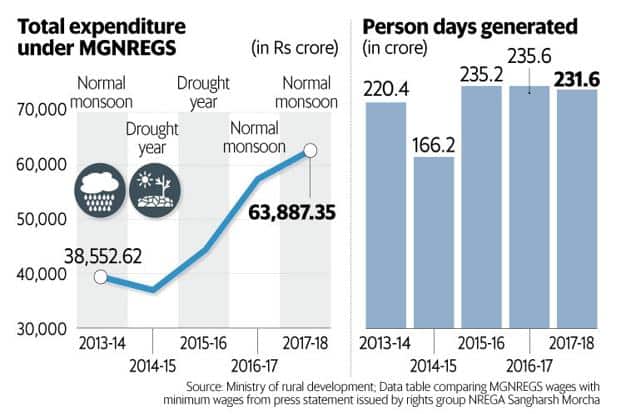 “Despite a good agriculture (production) year and lower than minimum wages, which is a disincentive to participate, high demand for work under the scheme shows the level of distress in rural India and paucity of jobs," said Himanshu, associate professor of economics at Jawaharlal Nehru University, Delhi, adding, “a large chunk of the funds spent in 2017-18 went to settle pending dues and the programme could have done much better with larger fund allocation."

Following consecutive years of record harvests in 2016-17 and 2017-18, a crash in crop prices led to a sharp dip in farm incomes.

Despite the higher expenses under the flagship scheme, wages under MGNREGS continue to be lower than minimum wages for agriculture labourers in as many as 27 states and Union territories, rights group NREGA Sangharsh Morcha said on Sunday. Recently notified wage rates for 2018-19 show no rise in some of the poorest states of the country such as Bihar, Jharkhand and Uttar Pradesh, and expose the centre’s apathy towards rural India, the Morcha said in a statement.

According to a statement from the rural development ministry, expenditure on MGNREGS was nearly Rs25,000 crore more than what was spent in 2013-14. It further said that about 86% of the payments in 2017-18 were made within 15 days of a rural household participating in the scheme, compared to 50% in 2013-14. Delayed payments to beneficiaries has been one of the biggest criticisms of the programme. 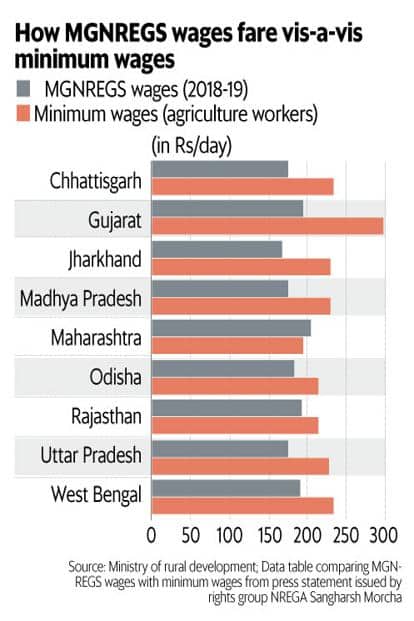 Acknowledging that one of the major drawbacks of the programme launched in 2006 is the large number of new work related to asset creation being taken up without the completion of older work and the construction of a poor quality of assets, the ministry also said that the emphasis laid on finishing tasks taken up over the last two financial years had “led to the completion of nearly 1.20 crore assets in 2016-17 and 2017-18 which is nearly equal to what was being completed in four years."

An assessment of MNREGS assets created by the New Delhi-based Institute of Economic Growth Study “found beneficiaries saying that 76% assets created were (of) good or very good (quality) and only 0.5% was unsatisfactory," the statement said.

In the last dozen years, the rural employment programme has been a key source of livelihood for millions of rural households. It guarantees up to 100 days of unskilled work in a year to one member of every rural household and was credited with raising rural household incomes. In 2017-18, the scheme provided 45 days of work on an average to a rural household, compared to 49 days in 2015-16, when a widespread drought hit several states.