New Delhi: Gyanesh Yadav is finally sure about what he wants to do in life.

After completing a bachelor’s degree in law and a postgraduate degree in political science, the 27-year-old has finally enrolled in an Industrial Training Institute (ITI) in Vijay Nagar, on the outskirts of Ghaziabad.

“Nobody should feel ashamed to get their hands dirty," he says.

Yadav practised in a local court for a couple of months, but “soon realized" that it wasn’t the profession that would give him meaningful employment for life. As for the master’s degree, it “has not taught" him to be self-reliant.

“What degrees couldn’t do for me, I am hoping skill training will. I think I am seven years too late in realizing this," says Yadav, son of a government clerk.

Sometime ago, the Uttar Pradesh Power Corp. Ltd advertised vacancies, but he couldn’t apply. “I was interested, but could not apply. They asked for a skill training certificate, especially an ITI diploma, and I did not have one," he says, adding that there are jobs aplenty, but college graduates like him are not skilled enough to get them.

With jobs proving elusive, many graduates have begun to realize that it is skills that can help them become independent and a college degree isn’t always the best way forward.

After a bachelor’s degree in business administration, Kumar is training to be an electrician. While the natural progression for him would have been a job in a corporate setting or an MBA degree, the lack of placement nudged him towards skill training. “When I took admission for BBA in a private college, my family thought a good job awaited me. Three years passed and my search for a job continues," says Kumar and credits his uncle for goading him to join ITI.

“The desire to embrace a white-collar job is gradually waning and the desire for a blue-collar job is slowly gaining ground. An ITI diploma or certificate can get me an assured job in the government sector or at the most in a private company, but a BBA will not provide that opportunity," says Kumar.

“Companies need more technicians than engineers or management graduates," he says, echoing what industry experts and government authorities have been trying to drive home for the past few years.

Yadav, Kumar and several of their classmates say this change of attitude, coupled with top-down awareness campaigns, will bring students to skill schools and ensure dignity of labour.

It is estimated that only 4.69% of the total workforce in India has undergone formal skill training as compared with 68% in the UK, 75% in Germany, 52% in the US, 80% in Japan and 96% in South Korea, skill development minister Rajiv Pratap Rudy told Parliament on 12 August. 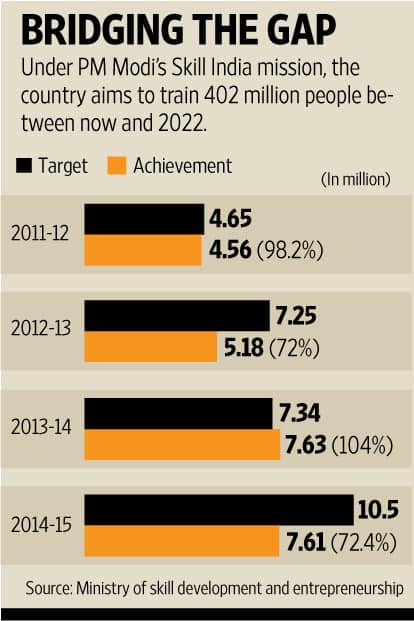 The Skill India mission launched by Modi on 15 July aspires to bridge this gap. The Prime Minister said India needs more people trained in specific skills to improve productivity in both manufacturing and services. He said that if the 20th century saw India’s foremost technical institutes—the Indian Institutes of Technology—make a name for themselves globally, the 21st century requires that ITIs acquire global recognition for producing skilled manpower.

India aims to train 402 million people in specific skills between now and 2022 as part of the mission and, of these, at least 110 million workers are required in around 25 sectors such as textiles, automobiles, construction, banking and retail.

Realizing the ground realities, the skills ministry has already signed agreements with a half a dozen other ministries—a move that it believes will lead to an integrated national strategy and reduce duplication of effort.

Tahsin Zahid, head of the skill committee at industry lobby PHD Chamber of Commerce, said India is at a crossroads as far as skill development is concerned. “Unless jobs follow skill training, it will continue to be a second choice for people. The emphasis on skill training, from the Prime Minister downwards, has helped create a certain awareness, but job placement is key. Because unemployment is less of a problem than trained unemployment," he said.

Zahid, like many other experts, believes that apprenticeship training or training on the shop floor, as opposed to in a classroom, is key. A labour ministry official said the amendment to the Apprenticeship Act in 2014 was done keeping this point in mind, but industries need to come forward. “Industries cannot keep crying out for skilled manpower without playing a role. You cannot blame the government for everything," the official said.

He gave the example of how in September 2014, the Indian embassy in Lima, Peru, wrote to his ministry asking whether India really doesn’t have workers such as “jumbo operator, loader operator, blaster, long hole drilling operator" as two mining companies active in Rajasthan were seeking employment visas for Peruvian nationals.

Between January 2012 and September 2014, the Indian embassy in Lima issued 123 employment visas for such workers. “Both companies have indicated that they will continue to need more such personnel, both for their expansion plans and as replacement of some workers returning to Peru," said the embassy’s letter to the labour ministry, a copy of which has been reviewed by Mint. The labour ministry subsequently forwarded the letter to the skills ministry.

The ministry official quoted above said the letter highlights two key issues—one, there is a dearth of skilled manpower; and second, that companies are ready to hire from abroad, but not ready to train people at work sites.

Sabharwal of Teamlease said if India had the same percentage of its labour force in apprenticeship that Germany does—3.7%—the country would have more than 15 million apprentices. He said the old Apprentices Act of 1961 treated an apprenticeship like a job rather than a classroom. He is optimistic about the changes made in the Act—greater flexibility in apprentice hiring, better remuneration, among others.

“Corporate India is still not adjusting to the new apprentice regime. Trust will take some time to build, but we have a real shot at India having 10 million apprentices in 10 years," said Sabharwal.

He said India had made two major mistakes around human capital after independence—not prioritizing primary education and skill development. Primary education because in the new work environment, the most important vocational skill may be reading, writing and arithmetic, and “you can’t teach somebody in one year at the exit gate what they should have learnt in 12 years of school".

“Skill training because the only sustainable way to reduce poverty is to make everybody employable. A job changes a life in a way that no subsidy can," added Sabharwal.

But whether it is skill training, apprenticeship, integrating education with skills through a credit framework, or providing soft loans to private skill trainers via the National Skill Development Corporation, both central and state governments need to improve their due diligence and ensure accountability. “Else, in the next four-five years, India may achieve skill training numbers on paper, but will not improve productivity either of its industry or workforce," said a retired bureaucrat requesting anonymity.