It was the humble autorickshaw’s sterling tryst with international fame: a quintessential chase scene in a James Bond thriller. In the 1983 film Octopussy, the villain’s henchman Gobinda (Kabir Bedi) pursues Bond (Roger Moore) through the streets of Udaipur, the British super spy clinging on for dear life to an autorickshaw driven with infectious glee by Vijay (Vijay Amritraj). 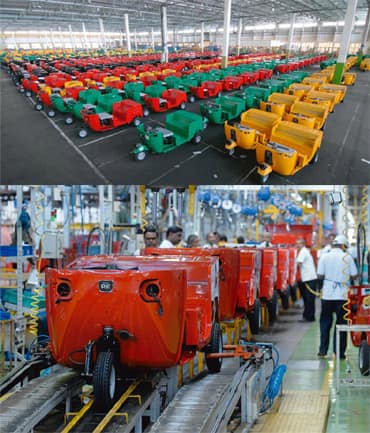 It may have added humour to that sequence for an international audience but the autorickshaw has a far greater role to play—as a form of public transport that bridges the economic divide between taxis and buses, a speedy alternative on crowded city roads, an annoyance, a relief and, for the last 48 years, an integral part of urban India.

For someone like Basant More, who has been driving them on Mumbai roads for the last 15 years, it’s been an indispensable source of livelihood. “While one may not be able to climb high in the social and financial hierarchy, one can earn a decent living out of them," says More. He owns one of the 80,000-90,000 autorickshaws in Mumbai.

The all-pervasive, self-effacing three-wheelers, also known merely as “autos", “rickshaws" or trendy “ricks", have donned several roles over four decades, from simple public transport to goods carrier, and remained steadfast on Indian roads—India is the world’s largest market for three-wheelers. It’s called the tuk-tuk in some parts of South and South-East Asia, and can even be seen in Europe, often more as a tourism gimmick than as a form of transport.

Also Read The trick is to get a rick

High-density population and the absence of economical and efficient modes of commuting have made three-wheelers omnipresent in these Asian regions. Even as they plug the critical gap between rail and road transportation in urban centres, autorickshaws have been subjected to doomsayer predictions whenever a mightier, cost-effective, four-wheeled counterpart has rolled out of a factory.

Answering an innocuous question at a press conference during last month’s Auto Expo, on whether Tata intended to wipe out the three-wheeled passenger carrier market with its new four-wheeler offering Magic Iris, Ratan N. Tata, Tata group chairman, said, “We are not on a hunting spree to wipe out the endangered species."

The question was relevant because Tata Ace created a viable alternative to the three-wheeled goods carriers with its mini-truck, and the Iris, expected next year, intends to address small transportation needs in semi-urban and rural areas.

It’s not only light commercial vehicles that have posed existential dilemmas for the “poor man’s taxi". When Tata Motors Ltd launched the Nano in July, the Rs1 lakh car, billed as the world’s cheapest, industry circles were rife with speculation that the autorickshaw might be in for some serious competition.

But the “rick" has survived.

R.C. Maheshwari, chief executive of the commercial vehicle (LCV) business at Bajaj Auto Ltd, says auto-rickshaws are here for the long haul. “There’s nothing called a three- or four-wheeler. There’s a last mile (small vehicles which offer feeder services connecting smaller routes) transport category." This category is still under evolution and there is enough for everyone, he adds.

Ravi Chopra, managing director, Piaggio Vehicles Pvt. Ltd, the second largest autorickshaw maker in the passenger carrier and the largest in the goods carrier segment, agrees: “With three- and four-wheelers, there’s that much more choice for users. One can’t wish away the three-wheelers."

V.G. Ramakrishnan, senior director, automotive and transportation practice at global consulting firm Frost and Sullivan, says the autorickshaw may go the moped way in metro cities with the launch of low-cost cars such as the Tata Nano and other LCVs.

Yet, the “auto" survives.

First off the block

Bajaj, the first to introduce three-wheelers on Indian roads in 1961, has sold around 3.5 million of them, commanding almost half the market share in the passenger-carrier segment. Piaggio, which entered the segment in 2000, has been catching up, helped by its goods carriers.

In the nine months ended December, Piaggio, with 41% market share and 132,923 three-wheeler units, inched ahead of Bajaj, which sold 131,528 units and has a market share of 40.88%. Bajaj continues to lead the passenger carrier segment with 48.28% market share, a growth of 38% over a year ago. Mahindra and Mahindra Ltd launched its first Champion range of three-wheelers in 2001. The latest is TVS, which entered this space in 2008 with the TVS King brand.

At Bajaj’s factory in Waluj, 25km off Aurangabad in Maharashtra, robots whir and jerk at the paint shop and models roll off the integrated assembly line. From 20-a-day in 1985, the factory now cranks out 1,300 units a day.

The plant, which has been the nucleus of evolution of Bajaj’s three-wheelers, is in its silver jubilee year. More than 45 years ago, Navalmalji Firodia and Hastmalji Firodia, partners in the firm Bachraj Trading Corp. Pvt. Ltd founded by Jamnalal Bajaj, started importing and selling Piaggio two- and three-wheelers, says N.M. Dhoot, a former Bajaj executive who was with the company for 45 years.

Subsequently, they got into a licensing agreement with the Italian manufacturer Piaggio and started assembling them in a factory in Kurla, Mumbai. The unit was later expanded and shifted to Akurdi, near Pune.

In the late 1980s, the entire two- and three-wheeler production unit shifted to Waluj. The production of Bajaj three-wheelers, which had been completely localized by then, started in 1985. The company’s technology agreement with Piaggio ended in 1970 and from 1971, Bajaj started making them on its own.

A whirlwind tour of the facility suggests winds of change have swept it clean of the vestiges of the licence era, the only umbilical cord being that some of the faces are still around.

Like Govind Hotte, who has been employed at the Waluj facility since 1985. “Earlier, while fitting parts into a vehicle, I would be required to bend, lie down, turn around to pick parts, and engage in lot many more motions. Today, it’s the vehicle that moves "—Hotte describes the typical change technology brings.

Over the years, Bajaj has given makeovers to its autorickshaws—moving from the unpopular front engine, two-stroke petrol model to a more refined rear engine in the 1970s, which gave it higher power, better fuel efficiency and also made the rides more comfortable. Other players—Piaggio, Mahindra and smaller regional players such as Atul Auto Ltd and Scooters India Ltd—who had begun to gauge the market potential of the three-wheelers, geared to launch their own brands in early 2000. The launch of the mini-truck Ace in 2005 changed the dynamics somewhat and manufacturers have been straddling the so-called last mile segment with their offerings.

Explaining the rationale for a presence in this segment, Pawan Goenka, president, auto sector, at Mahindra and Mahindra, which unveiled a sub-one-tonne mini-truck Maxximo at the Auto Expo, says: “We didn’t have a product in that range, which is dominated by one company. We are trying to provide a value proposition."

R. Ramakrishnan, vice-president, sales and marketing, for commercial vehicles at Tata Motors, says, “I won’t even for a moment say we are trying to take on the three-wheeler market." He believes the pride and the aspiration of owning a four-wheeler may at least dent the market for three-wheelers.

People such as More, and many others for whom autorickshaws are a way of earning their daily bread, may not ride them with the glee that Vijay Amritraj did in the Bond thriller. But they love their machines and start each work day by adorning them with green chillies and lemon to ward off the evil eye.

After nearly 50 years on Indian roads, “ricks" has learnt the tricks of survival.