New Delhi: India, which plans to purchase billions of dollars worth of military hardware in the next five years, will soon relax strict rules on arms imports, officials say.

A new defence procurement policy (DPP) will be unveiled by April, defence minister A. K. Antony said on Saturday at a defence fair sponsored by the Confederation of Indian Industry (CII). 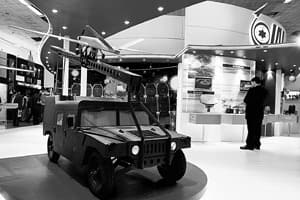 Hardware: A visitor at Israel’s defence systems stall at the fifth land and naval systems Defence Expo 2008 in New Delhi.

“We have been fine-tuning and improving the DPP based on periodical reviews (and) the current procurement procedure is also under review to make it more transparent and user-friendly," he said.

In another development, French company DCNS Group announced at the same venue that the Scorpene submarine could be fitted with the underwater version of the Brahmos cruise missiles, which could enhance the Navy’s firepower capability,

“If India wants, Brahmos cruise missiles can be fitted on the Scorpene being built under technology transfer at Mazagon docks," DCNS project director Xavier Marchal said.

DCNS is manufacturing the submarine. If New Delhi gives the go-ahead for the deal, it would increase the potential of the Navy, giving it a second option of firing missiles from submarines. Navy’s recently upgraded Russian Kilo class submarines are armed with shore strike missiles.

European military systems integrator Thales Group announced at the event the news that the company had received an order to install advanced fire control systems and night vision devices on 1000 frontline T-90 tanks of the Indian Army. “The order can multiply into thousands if the Indian Army decides to install the state of art computerized weapon firing systems on its T-72 and armoured personnel carriers," Francois Hubert-Habart, the company’s sales director for Asia, said.

The company received the fresh order for 320 thermal images just 10 days back.