Govt was targeting 1 trillion in GST revenue every month. But, so far, average monthly collection stood at 96,705 crore

New Delhi: The central government is likely to miss the goods and services tax (GST) collection targets for this financial year, finance minister Arun Jaitley hinted on Friday. This, despite the fact that most states managed to reduce their revenue shortfall compared to last year.

When asked if the government was confident of meeting the GST collection targets, Jaitley said: “We are in the middle of the year. The festival season is coming, and it is the consumption season...We will try and come as close as possible to the target." He added that, along with direct tax collections, the government should be able to comfortably meet its fiscal deficit targets.

The centre was targeting ₹ 1 trillion in GST revenue every month. However, so far, the average monthly collection stood at ₹ 96,705 crore, or a shortfall of ₹ 16,473 crore till August. 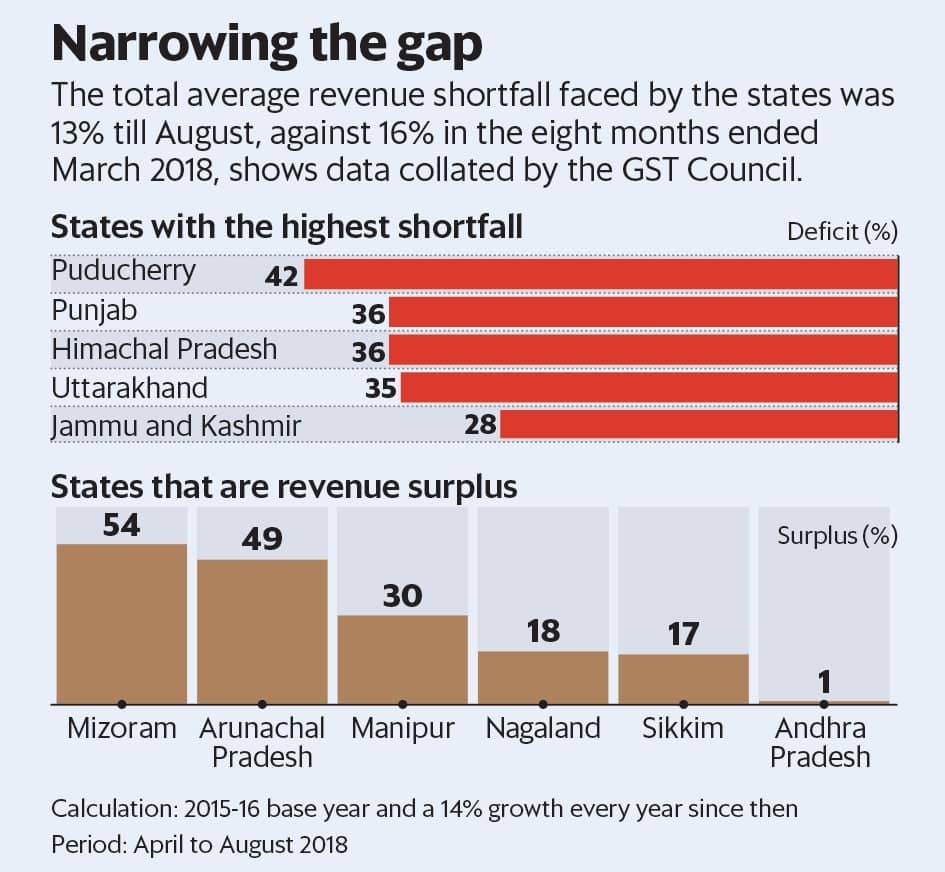 The finance minister was briefing the press after the 30th meeting of the GST Council, wherein the revenue trends among states were discussed. The total average revenue shortfall faced by states was 13% till August, against 16% in the eight months ended March 2018. The centre is looking to prop up state revenues and address state-specific problems.

According to data collated by the GST Council, while most states managed to reduce their revenue shortfall under GST compared to last year, Delhi, Maharashtra, Tamil Nadu, Kerala and Goa have reported higher deficits. The highest deficit was reported by Puducherry, Punjab, Himachal Pradesh, Uttarakhand and Jammu and Kashmir during the five-month period ended August 2018.

Delhi’s deficit increased by more than 13% to 19% in the five months ended August, compared to the eight-month period ended March. The deficit reported by Tamil Nadu, Maharashtra, Kerala and Goa increased by less than 2 percentage points.

Economic activity in Goa suffered due to the Supreme Court’ mining ban in the state effective 15 March. Tamil Nadu was hit by environment-related protests resulting in the closure of Sterlite Industries Ltd’s four-lakh tonne Thoothukudi copper plant in May. Kerala’s fall in collections could be attributed to the floods, but the sharp increase in Delhi’s revenue deficit has become a cause for concern.