Bara, Pakistan: More than 70 US military advisers and technical specialists are secretly working in Pakistan to help its armed forces battle Al Qaeda and the Taliban in the country’s lawless tribal areas, American military officials said.

The Americans are mostly Army Special Forces soldiers who are training Pakistani army and paramilitary troops, providing them with intelligence and advising on combat tactics, the officials said. They do not conduct combat operations, the officials added. 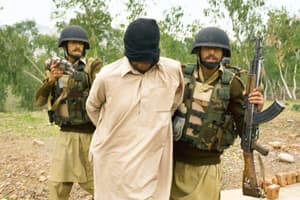 Combat tactics: Pakistani commandos repel a mock Taliban ambush in a demonstration on Sunday in the Khyber Agency, one of the tribal areas that run along the border with Afghanistan. Tyler Hicks / NYT

Pakistani officials have vigorously protested against American missile strikes in the tribal areas as a violation of sovereignty and have resisted efforts by Washington to put more troops on Pakistani soil. President Asif Ali Zardari, who leads a weak civilian government, is trying to cope with soaring anti-Americanism among Pakistanis and a belief that he is too close to Washington.

Despite the political hazards for Islamabad, the American effort is beginning to pay dividends.

A new Pakistani commando unit within the Frontier Corps paramilitary force has used information from the US’ Central Intelligence Agency (CIA) and other sources to kill or capture as many as 60 militants in the past seven months, including at least five high-ranking commanders, a senior Pakistani military official said.

Four weeks ago, the commandos captured a Saudi militant linked to Al Qaeda here in this town in the Khyber Agency, one of the tribal areas that run along the border with Afghanistan. Yet the main commanders of the Pakistani Taliban, including its leader, Baitullah Mehsud, and its leader in the Swat region, Maulana Fazlullah, remain at large.

And senior US military officials remain frustrated that they have been unable to persuade the chief of the Pakistani army, Ashfaq Parvez Kayani, to embrace serious counterinsurgency training for the army itself. Kayani, who is visiting Washington this week as a White House review on policy for Afghanistan and Pakistan gets under way, will almost certainly be asked how the Pakistani military can do more to eliminate Al Qaeda and the Taliban from the tribal areas.

The US officials acknowledge that at the very moment when Washington most needs Pakistan’s help, the greater tensions between Pakistan and India since the terrorist attacks in Mumbai last November have made the Pakistani army less willing to shift its attention to the Al Qaeda and Taliban threat.

Officials from both Pakistan and the US agreed to disclose some details about the American military advisers and the enhanced intelligence sharing to help dispel impressions that the missile strikes were thwarting broader efforts to combat a common enemy. They spoke on condition of anonymity, citing the increasingly powerful anti-American segment of the Pakistani population.

The Pentagon had previously said about two dozen American trainers worked in Pakistan late last year. More than half the members of the new task force are Special Forces advisers; the rest are combat medics, communications experts and other specialists. Both sides are encouraged by the new collaboration between the American and Pakistani military and intelligence agencies against the militants.

“The intelligence sharing has really improved in the past few months," said Talat Masood, a retired army general and a military analyst. “Both sides realize it’s in their common interest."

Intelligence from Pakistani informants has been used to bolster the accuracy of missile strikes from remotely piloted Predator and Reaper aircraft against the militants in the tribal areas, officials from both countries say.

More than 30 attacks by the aircraft have been conducted since last August, most of them after Zardari took office in September. A senior American military official said that nine of 20 senior Al Qaeda and Taliban commanders in Pakistan had been killed by those strikes.

In addition, a small team of Pakistani air defence controllers working in the US embassy in Islamabad ensures that Pakistani F-16 fighter-bombers conducting missions against militants in the tribal areas do not mistakenly hit remotely piloted American aircraft flying in the same area or a small number of CIA operatives on the ground, a second senior Pakistani officer said.

The newly minted 400-man Pakistani paramilitary commando unit is a good example of the new cooperation. As part of the Frontier Corps, which operates in the tribal areas, the new Pakistani commandos fall under a chain of command separate from the 500,000-member army, which is primarily trained to fight Pakistan's arch-enemy, India.

The commandos are selected from the overall ranks of the Frontier Corps and receive seven months of intensive training from Pakistani and American Special Forces.

The CIA helped the commandos track the Saudi militant linked to Al Qaeda, Zabi al-Taifi, for more than a week before the Pakistani forces surrounded his safe house in the Khyber Agency.

The Pakistanis seized him, along with seven Pakistani and Afghan insurgents, in a dawn raid on 22 January, with a remotely piloted CIA plane hovering overhead and personnel from the CIA and Pakistan's main spy service closely monitoring the mission, a senior Pakistani officer involved in the operation said.

Still, there are tensions between the sides. Pakistani F-16s conduct about half-a -dozen combat missions a day against militants, but Pakistani officers say they could do more if the Pentagon helped upgrade the jets to fight at night and provided satellite-guided bombs and updated satellite imagery.

Kayani was expected to take a long shopping list for more transport and combat helicopters to Washington. The question of more F-16s—which many in Congress assert are intended for the Indian front—will also come up, Pakistani officials said.

Eric Schmitt from Bara, Peshawar and Islamabad, Pakistan, and Jane Perlez from Islamabad contributed to this story.