Kochi: Kerala’s rubber growers, who produce most of the country’s output, are getting worried about the rising temperatures and unseasonal rain, which threaten to wipe out the gains they’ve made in the past few decades.

Inclement weather led to a decline of about 50,000 tonnes of natural rubber in 2009, said Suresh Koshi, a planter and president of the National Federation of Rubber Producer Societies.

India used to have one of the lowest levels of productivity in the 1950s at around 600kg per ha, which has since surged to 1,903kg, ranking the highest in global productivity. 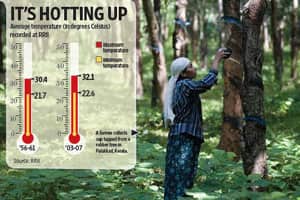 RRII said it’s too early to quantify the decline in yield owing to warming, while farmers say it has dropped 15-20% in the past five years.

The drop in collection is in the range of 15-20%, said Satish Abraham, president of the Association of Latex Producers of India, a group of 88 companies that source the raw material from plantations, rubber societies and small growers. The high daytime temperature slows the flow of latex, the sap extracted from the tree that’s treated and dried to make rubber sheets.

K. Sadanandan, based in Kollam district and a recipient of the board’s best rubber grower award, has had a 35% drop in production so far this year. He has around 1,000 trees and the average yield per tree annually is around 7.5kg. The warmer temperatures cause undue stress to the trees, which has forced him to reduce tapping to a weekly basis. “Usually, people tap thrice a week, which I used to do till a few years ago. This adds stress to the tree and the yield is around 5kg annually," he said.