Beta cities - on the threshold

Beta cities - on the threshold

Just as emerging economies are those that stand on the threshold of advancing into the big league, there are emerging cities in India: the cities that have the potential to match the larger cities in market size.

Indeed some among them will become elite cities eventually. These Beta cities, as opposed to the Alpha top-tier cities of India, have diverse characteristics. Many of these cities are state capitals such as Jaipur and Lucknow, benefiting from better infrastructure and public services. Cities such as Jamshedpur and Faridabad have been industrial centres for decades now, but seemed to be content giving precedence to other newer centres that have grown. Some such as Indore have been threatening to make it big for many years, but never quite managed it. Some others such as Kanpur have somehow lost their way. Cities such as Thane and Thiruvallur have boomed, thanks to their proximity to metros. Except for Kanpur, all have had double-digit, or close to that, annual growth in their market size over the past two years. 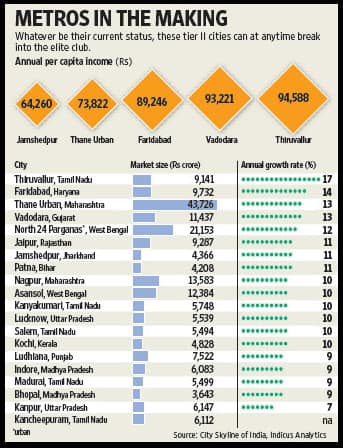 India’s tier II cities, are among the largest urban markets and can at anytime break into the elite club the way Surat and Coimbatore have. Ahmed Raza Khan / Mint

These cities will over the next few years grow in importance and in a range of areas. Many of these cities were in the past specializing in a few sectors and industries; but with growing population and large-scale in-migration, they are steadily growing in the range of activities that are undertaken within and in their vicinity. The bulk of these cities have quite poor public infrastructure (since serious urban investment in the past has been limited to state capitals); but that is already changing rapidly. Supply always finds a way to meet the demand, even if the governments are unresponsive. High incomes in Indore, for instance, and availability of credit led to high auto demand; when the urban government could not provide that, residential areas started to put up their own roads. Residents of Patna are working with the government for improved law and order, the industrial community in Ludhiana is working together to improve the city, and there are many such examples. Cities such as Coimbatore and Surat have in the past already shown how cities and administration in the second tier towns of India are slowly but steadily creating urban communities that will one day totally change India’s urban landscape.

These cities currently are much smaller than the top metros, but many have per capita incomes that are higher than those in the top metros, and most of them have sustained double-digit growth. It is only a matter of time before they become important metros in their own right.

Demand Curve is a weekly column by research firm Indicus Analytics Pvt. Ltd on consumer trends and markets. Your comments are welcome at demandcurve@livemint.com