The latest elections mark a come-back for India's grand old party, making it a strong contender for power in 2019

New Delhi: The results of the assembly elections to five states — billed as the semi-final elections, as they have been held just six months ahead of the 2019 Lok Sabha elections — suggest that the Congress is back with a bang.

Across the five states, 679 seats were up for grabs and, as of 6 pm yesterday, Congress were poised to secure 301 of these seats, witnessing a 4 percent vote-swing compared to 2013. BJP’s performance has slumped, with the party losing 47 percent of seats (-4.5 percent swing in vote-share) compared to 2013. The Congress’ ability to raise its vote-to-seat conversion rate made all the difference this time.

In 2013, it was BJP’s resounding success in three of the five states that paved the way for its success in the Lok Sabha elections held soon after, in mid-2014. That summer of discontent against the Congress seems a distant memory today, as the Congress emerges as a strong contender for power in 2019.

The other big message from the verdict is the return of populism, with a reformist chief minister shown the door in Rajasthan, and a populist chief minister of Telangana voted back with a thumping majority. Farm loan waivers, sops and freebies may be the new normal as governments across the country open up purse strings to match the Telangana model. What it does to inflation, and to India’s macro-economic stability needs to be closely watched. Here are five key trends that emerge from the latest polls. 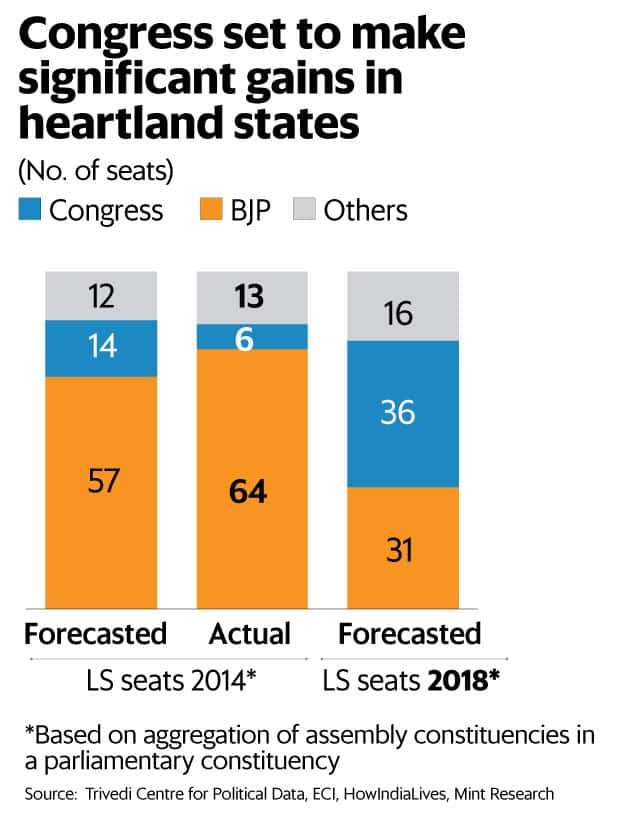 Between them, the five states contribute 83 seats to the Lok Sabha. Assuming the trends of end-2018 hold till mid-2019, the Congress is set to gain 30 seats in these five states, while the BJP is set to lose 33. Examining the results of the 2013 assembly polls and the 2014 Lok Sabha elections, we find a broad correspondence in assembly election results and Lok Sabha election results across states, barring Chhattisgarh. Chattisgarh saw a close contest between the Congress and the BJP in end-2013 but in the 2014 Lok Sabha polls, the BJP won handsomely.

The other big gainer could be the TRS which won 11 Lok Sabha seats in 2014, and following a dominant victory in these elections, is on track to secure 15 seats in 2019. 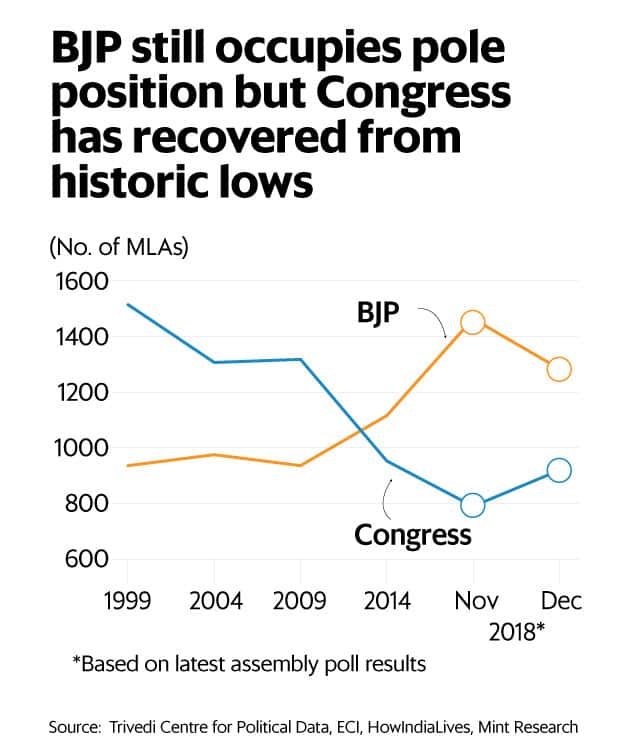 As the chart on the number of MLAs shows, the grand old party has recovered from the historic lows it had fallen to in the wake of the 2014 elections. While the BJP still occupies the pole position in national politics even today, the Congress has now re-emerged as its formidable opponent on the national stage, closing the gap between the two major national parties.

Following these results, the Congress will be hoping to narrow the gap further in 2019 when 8 states, comprising of 960 state assembly seats, go to polls next year. 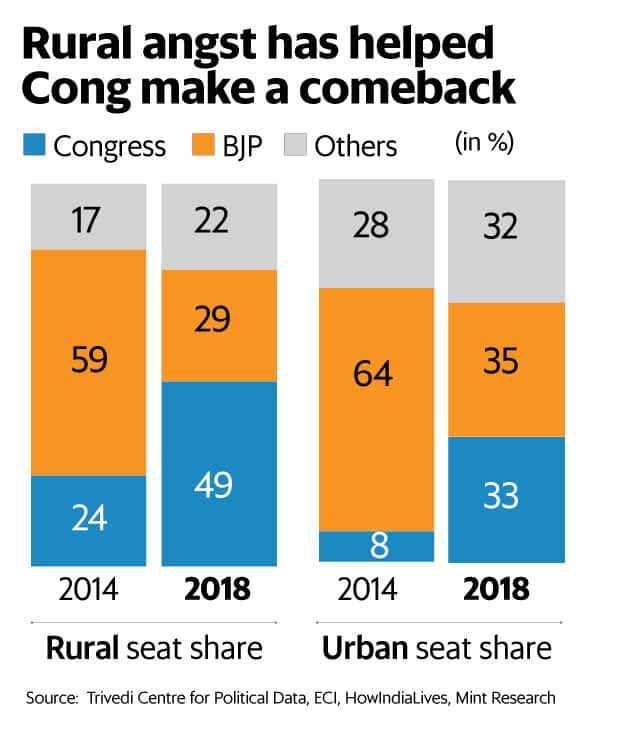 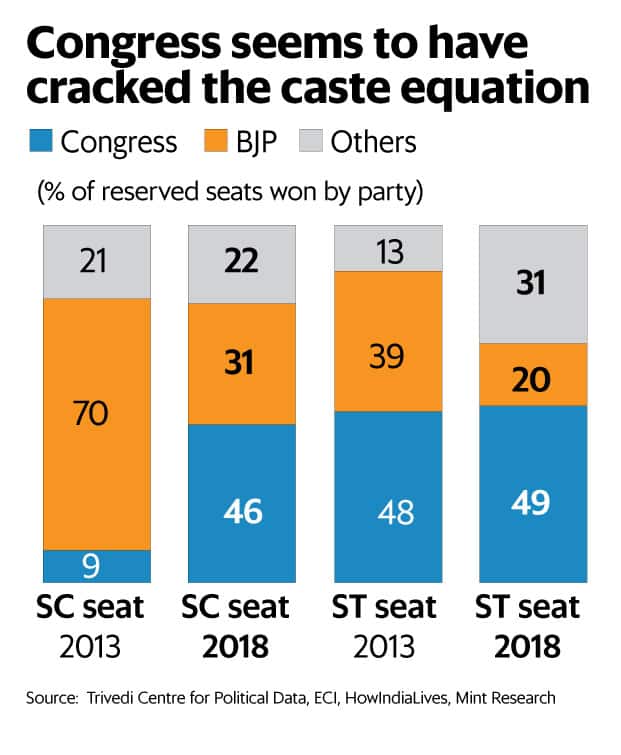 Caste has been a leitmotif of Indian elections throughout history, and this time was no different. The Congress seems to have benefited from the controversy over the dilution of the Prevention of Atrocities Act, aimed to protect the scheduled castes (SCs) and scheduled tribes (STs) from harassment. As these pages have pointed out before, the BJP has borne the brunt of both upper caste groups, who hold the party responsible for failing to dilute the Act, and theresentment of SCs and STs who perceive the party as not being protective enough of their interests . The Congress seems to have capitalized on the resentment among both these groups. They secured victories in more reserved seats and performed better in non-reserved seats with significant SC/ST populations. Of the 36 general seats with a SC/ST population greater than 40%, the Congress won 21 seats, more than double the seats the BJP managed (10). The swing in favour of the Congress party has been sharper in some of the poorest districts, with poverty being measured as per the district-level multi-dimensional poverty index, an aggregate measure of poverty calculated by researchers at the University of Oxford.

In high-poverty districts, BJP lost nearly half the seats it had won in 2013.