Karnataka pins hope on software to give farm loan waiver

Bengaluru: Six months after Somballi Somashekar’s ₹ 50,000 crop loan was forgiven by the Congress government, the 59-year-old large farmer from Mandya waits for another write-off—this time by the H.D. Kumaraswamy-led coalition government. Unlike the last time, Somashekar, a pensive looking man, doubts the political class and its intent to write off farm debts, even though he just availed a farm loan waiver.

But much like most others in the over 7.8 million-strong farming community in Karnataka, whose occupation cycle depends on farm loan waivers, Somaeshekar is getting increasingly restless and wants the government to give him his due—a promised waiver of loans of up to ₹ 2 lakh per family. 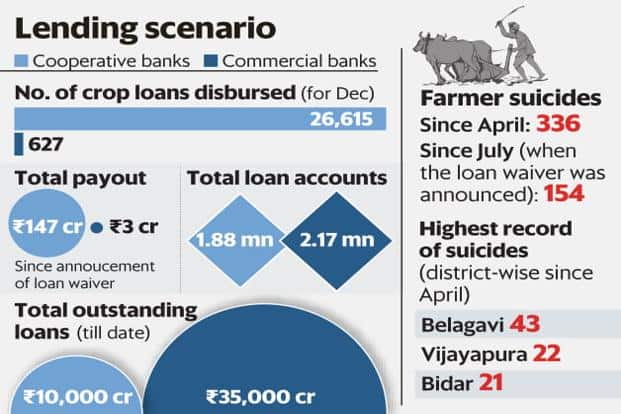 Though the implementation of farm loan waivers has taken a lot longer previously, the farming community’s impatience this time stems from the “debt-free" promise, giving them hopes of an escape from decades of subdued farming, falling prices of produce, scanty rainfall, drought and piling debts.

“I am only asking them to give me the two lakhs that he has promised," Somashekar said, even though his family has loans of around ₹ 19 lakh from both commercial and cooperative banks.

The disbursal of money has been held up, officials claim, because there was no exhaustive database of loans taken out by farmers.

To rectify this, the government developed its own software, which includes running complex algorithms to match names, to collate the information to help it pay out genuine beneficiaries.

The authorities claim to understand the urgency, but say they do not want to repeat the mistakes that they made during the implementation of the ₹ 8,165 crore farm loan waiver (of which only around ₹ 5,000 crore was released) announced by the previous government, including disbursal without verification. This time, the government has added additional scrutiny to help genuine farmers benefit from the scheme.

“How does it matter if we take an additional 6-10 months to pay a loan that has not been paid in 10 years," a senior government official directly involved in the rollout of the farm loan waiver asked, requesting not to be identified.

“Would you rather wait one month and pay the correct person or would you make a hurried decision today," asked the official. The Karnataka process, the official insisted, would become a model for the country to follow. According to the requirements, a farmer is expected to submit details of his ration card, Aadhaar card and land records on which the loan was availed. “Our software will match the Aadhaar data with UIDAI, ration card with food department data and pull out land record details from the Bhoomi portal," he said.

The system is helping weed out duplication and establish a family tree. So far, out of the 2.1 million accounts, 600,000 have submitted their details. But of them, nearly 40% have not shown their ration cards, which the official fears could compromise the system.

But farmers are growing increasingly impatient and resorting to extreme measures as banks continue to issue notices for recovery of loans.

Data from Karnataka’s agriculture department shows that there were 154 farmer suicides since July, when the farm loan waiver was announced. Since March, 336 farmers have ended lives, with the rich sugarcane-growing region of Belagavi recording the highest number at 43. The government has disbursed ₹ 150 crore and claims it will complete the list of those eligible by the end of January, at least for those who have borrowed from commercial banks. Cooperative banks, the official said, have long been misused by the political class, necessitating additional scrutiny as most of the records are manual. According to the data collected so far, at least 20% of farmers, who have availed loans in commercial banks, have also taken loans from cooperative banks. It is these anomalies that the software aims to eliminate.

Though the total outstanding amount is around ₹ 45,000 crore, actual payouts will be around ₹ 12,000 crore and ₹ 10,000 crore for commercial and cooperative banks, respectively, due to the ₹ 2 lakh cap on families. But the added scrutiny and streamlining of an otherwise loosely constructed system are being considered as delays, giving the opposition fresh fodder to attack the government with.

“Distress itself is manifested in different ways," said Seema Purushothaman, an agricultural economist and faculty at the Azim Premji University. She said farmer movements, especially those seen mobilizing across India in recent months, have different motives and highlight agrarian issues without necessarily offering long-term solutions.

Indian agriculture, which she describes as unique, is under pressure as people move away from farming by converting some of their agricultural land into real estate or letting it be acquired for infrastructure. Since 2000, around 200,000 hectares of farm land have been diverted to non-farming purposes, shows data. But many who have sold their land continue to take loans as farmers, which Purushothaman says is the bigger problem. For most others in the community, it is a matter of waiting until the next elections for another loan waiver to be announced. Much like Somashekar continues to do.