Bangalore: The government’s hope of securing world heritage status for the Western Ghats at next month’s Unesco World Heritage Committee (WHC) meeting at St Petersburg, Russia, received a blow after a technical advisory body to the agency recommended deferring a decision.

According to an evaluation by the International Union for Conservation of Nature (IUCN) that was reviewed by Mint, the government’s revised nomination in February did not meet Unesco standards for protection and management of the Western Ghats.

This is twice in a row that the nomination has been sent back. The Indian government had sent in a revised nomination after WHC asked India to address a range of issues related to the classification of sensitive and buffer zones, the site’s boundary and lack of protection measures by the government.

Unesco’s primary objection has been with respect to the extent of protection accorded to the Western Ghats by the government. The government has proposed bringing seven spots under the heritage status. The seven spots or sub-clusters currently nominated are: Agasthyamalai, Periyar, Anaimalai and the Nilgiris in Kerala and Tamil Nadu, Talacauvery and Kudremukh in Karnataka, and Sahyadri in Maharashtra. These seven sub-clusters include a total of 39 sanctuaries and tiger reserves for a total of nearly 800,000 hectares.

However, Unesco wants more areas included. For instance, it wants to include areas recommended by a panel appointed by the ministry of environment and forests (MoEF). “I understand that the deferral is because the government is yet to take action on the report submitted by our panel," said Madhav Gadgil, one of India’s leading ecologists and chairman of the Western Ghats Ecology Expert Panel (WGEEP).

The Indian government has laid the responsibility on WGEEP for failing to recommend additional sites to the heritage group in its response to IUCN. 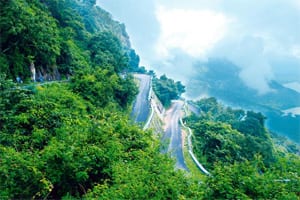 Sensitive ecology: A file photo of a part of the Western Ghats in Tamil Nadu. Hemant Mishra/Mint

IUCN has also concluded that management of the areas is not integrated, especially considering that the Western Ghats fall under multiple states. “IUCN remains concerned that individual management plans are complex and not set within the context of an overarching management plan, which clearly articulates how the management of the various component parts is to be consisted and harmonized," the technical report noted.

Another matter of concern was the content of the WGEEP report, with MoEF refusing to release it to the general public until it was directed to do so. On 9 April, the Central Information Commission (CIC) ordered the release of the report on MoEF’s website. The ministry challenged this in the Delhi high court. A single bench of the high court then upheld CIC’s orders last week and ordered the ministry to publish the report.

The WGEEP report was posted on MoEF website on Thursday morning. While MoEF did not respond to email queries sent by Mint and officials declined to respond by phone, the ministry appended the following disclaimer to the report: “The Western Ghats Ecology Expert Panel report has not been formally accepted by the ministry and...the report is still being analysed and considered by the ministry."

“MoEF’s attitude is inexplicable," said Praveen Bhargav, managing trustee of Wildlife First and a petitioner in the Supreme Court case that led to the stoppage of mining at Kudremukh. “This ministry’s actions fly against the decision of the UPA (United Progressive Alliance) government to implement the RTI (Right to Information) Act. The report is a part of the consultation process and should be in the public domain," he said. The ministry’s hesitation over publicizing the WGEEP report comes after objections to the heritage status arose in some areas, particularly in Karnataka.

“There is a lot of confusion at the ground level. What needs to be made clear to people is that people’s legal rights will not be affected by the heritage tag," said Bhargav. “People will not lose their land," he added.

Bhargav said vested interests were opposing the heritage tag. He referred to a portion of the Pushpagiri sanctuary in the Western Ghats that was bulldozed by local people led by elected representatives and supported by senior district officers, in violation of the Supreme Court orders. The Supreme Court’s central empowered committee has already submitted a report and the case is being heard in the apex court.