Longing to return to a free land

Longing to return to a free land

Bylakuppe (Karnataka): Ask Tenzin Chemi what her favourite Indian food is and she will say rava idli. Which is not unusual. After all, a lot of people in this part of the world like the steamed cakes made of broken wheat. 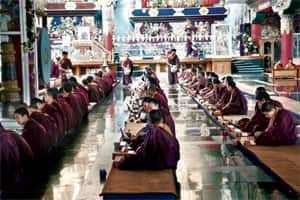 Chemi lives with her parents, grandfather and two brothers in Bylakuppe, a small, largely agricultural settlement, about 9km from the nearest town Kushalnagar, a wayside stop for tourists on their way to Coorg. For a Tibetan colony, the campsites are in an entirely incongruous setting, far from the mountains of the Himalayan range. There isn’t a hill in sight.

Following a failed 1959 uprising against China, the Dalai Lama sought refuge in India and has since lived in exile in Dharamsala, Himachal Pradesh. According to the Central Tibetan Administration, Tibet’s government-in-exile based in India, 94,203 Tibetans live in India, of the total 127,435 who live outside Tibet.

Miles away from their home, some Tibetan immigrants have found refuge on Indian soil; but continue to fight for a better future for their native land.

Chemi’s grandfather, 77-year-old Phuntsok, left his village in south-eastern Tibet in 1959. He was 25 at the time. He chose to come to India because the Dalai Lama had already been given refuge in the country, he says.

By many accounts, India gave refuge to the Tibetan Buddhist spiritual leader and his compatriots for a mix of reasons. For one, India was the birthplace of Buddhism.

“It is not clear what the Indian consideration was (in allowing Tibetans into India), but India (in 1959) had about two million Pakistani refugees, so accepting Tibetans was not an abrupt policy change," said Srikanth Kondapalli, a professor of Chinese Studies at the Jawaharlal Nehru University. “Nehru shared the dais with the Dalai Lama at Sarnath (in Uttar Pradesh), so one of the reasons was religious, but there were other reasons too, including strategic ones."

Phuntsok walked through Bhutan into Assam to take refuge in a small town called Missamari, where he stayed in tents with other Tibetan exiles. The Indian government, he says, provided them free food.

The Tibetans did not want anything for free, Phuntsok says, which is how he found himself as part of a road construction team for the Central Public Works Department in Dalhousie, Himachal Pradesh. After six months there, he was taken on a special train to Bylakuppe, then a little-known area about 230km from Bangalore, where then Karnataka chief minister S. Nijalingappa offered about 3,000 acres for the Tibetans to settle on.

Bylakuppe is now a bustling town with about 16,000 Tibetans living in four camps, the local resettlement office estimates. The settlement has four major monasteries housing about 11,000 Tibetan monks and those studying to be monks. Bylakuppe is, in fact, the oldest and among the largest Tibetan settlements in India—larger even than the one in Dharamsala.

The Tibetans run most local shops in the area. The land, according to Dolma Yangchen of the Tibetan resettlement office, was signed over in a lease to the Dalai Lama.

Phuntsok runs a sweater business out of Amravati in Maharashtra, which he started in 1977 after trying—and failing—to set up businesses in Chikmagalur, Mysore and Bangalore in Karnataka. He buys the woollens from Ludhiana in Punjab.

In Camp 4, where the main monastery called the Golden Temple stands, Savithri, who goes by one name and is a local resident, has been selling samosas for the past two years, mainly to the monks who live in the nearby hostels. For eight years before that, she would wander around the camp selling snacks cooked at home. Before that, she used to be a construction worker, like her father.

She has no qualms about the settlers who have moved into her neighbourhood. It’s not because the Tibetans moved to Bylakuppe that she makes the living she does. But yes, admits Savithri, if not for their presence, she would perhaps still be toiling as a construction worker.

There were originally about 100 houses in each of the Tibetan camps, although that number has increased along with the population. Most families have some land on which they farm, growing mainly maize. Almost all agriculture is rain-fed, with land lying fallow after the monsoon harvest. The families supplement their income by selling sweaters or running restaurants and carpet-weaving centres.

Of his forced migration, Phuntsok says India “accepted us and gave us almost all rights a regular citizen would have", except he can’t vote in Indian elections or sell the property where his house stands in Camp 1 in Bylakuppe.

The Tibetans hold fast to their identity and still consider themselves guests, which may be the reason for the repeated expressions of gratitude towards their host. There have been few instances of protests in Bylakuppe, camp residents say, except when local autorickshaw drivers had tried to increase fares. The Tibetans responded by boycotting the autorickshaws until an agreement was reached. Most autorickshaws in the area now have a rate card.

There are the inevitable issues over identity, such as when it comes to explaining where they are from.

“Not Indian, yaar—we always have that problem. And then I always say ki, you know, Tibetan settled in Mysore, refugees. Easiest way, you know," says Penpa Lhamo, 32, who was born in India to Tibetan parents. Lhamo studied journalism at the Madras Christian College in Chennai and worked at The New Indian Express for a while before taking a job as a teacher in a local Tibetan school.

But would Tenzin Chemi, who was born in this country, want to go back to Tibet, which she has never seen? “Yeah definitely, I would like to go back. If it is still ruled out of China, then I can’t stay for long, but if it becomes an independent country, then the feeling is entirely different, and I would like to stick with my country if it becomes independent. Though India has been very generous and provided me with equal rights as a citizen, except the voting thing," she says.

Elizabeth Roche in New Delhi contributed to this story.

This is the fifth of a 10-part series that profiles foreign communities that are contributing to India’s cosmopolitan culture.

Next: Dealing with generalization the biggest struggle for Nigerians.