New York / London: Claims that scientists suppressed data about global warming has prompted the head of a British university’s climate research centre to step down pending completion of an investigation. 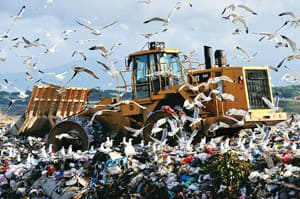 Climate concerns: A bulldozer flattens garbage at a landfill near Rome. Emails between scientists, including from Phil Jones, debating climate change that were stolen and posted on the Internet have led to claims that scientists suppressed data about global warming. Chris Warde-Jones / Bloomberg

Phil Jones, a professor and director of the Climatic Research Unit at the University of East Anglia in Norwich, will temporarily relinquish his post, the UK school said on Tuesday in a statement. Private emails from Jones were among thousands of correspondences between scientists debating climate change that were stolen and posted on the Internet last month.

The emails, dating back as far as 1996, have been cited by sceptics of man’s contribution to global warming as evidence of a conspiracy to manipulate data to support research. The Climatic Research Unit has said the emails were taken out of context and allegations of data manipulation are unfounded.

“They’re conspiring to keep papers out of published journals," Marc Morano, a climate sceptic who is editor of a website on the issue, said referring to the emails in a 24 November interview. “You see them as nothing more than a bunch of activists manufacturing science for a political goal."

Jones said disclosure of the emails ahead of the climate- change summit from 7 December in Copenhagen is an attempt to undermine measures to fight global warming.

“This may be a concerted attempt to put a question mark over the science of climate change in the run-up to the Copenhagen talks," Jones said in a statement. “We are, and have always been, scrupulous in ensuring that our science publications are robust and honest."

Websites and blogs such as the Climate Audit Mirror Site have carried copies of emails, correspondence between climatologists and commentary in what environmental columnist Eric Pooley on Wednesday called the shouting match known as Climategate.

In one email cited widely on blogs including Climate Audit, Jones writes about completing Mike’s nature trick of adding in the real temps in order to hide the decline.

Reached by telephone on 26 November, Jones referred all queries to the University of East Anglia press office.

The university’s data, combined with information from the UK Met Office, form one of the main temperature data series used in 2007 by the United Nations (UN) Intergovernmental Panel on Climate Change when it concluded warming is unequivocal, and that the global average temperature rose by 0.76 degree Celsius from 1850 to 2005.

“There are three independent data sets used by the UN panel," said Vicky Pope, head of climate change advice at the Exeter, the UK’s meteorological office. “The data has been heavily reviewed and checked and the data sets all agree on the warming."

At least 190 nations will meet in Copenhagen starting next week for 11 days in an effort to agree on international limits on emissions that contribute to global warming.

Organizations, including the UN and US National Aeronautics and Space Administration, say burning fossil fuels and cutting down forests is increasing concentrations of carbon dioxide in the atmosphere, creating a greenhouse effect that is warming the planet.

Last week, a group of 26 researchers, including some whose emails were stolen from a computer at East Anglia, said Greenland and Antarctic ice sheets are melting faster than expected and the future rise in sea level will be much higher than previously forecast.

The British university said it will make all of its data on land surface temperatures public. At least 95% of the data has been public for several years, the statement said.

“The university will also conduct an independent review, which will address data security, an assessment of how we responded to a deluge of Freedom of Information requests, and any other relevant issues which the independent reviewer advises should be addressed," Trevor Davies, pro-vice-chancellor of research at East Anglia, said in a statement. Nothing in the stolen emails suggests the university’s climate research is not of the highest quality of scientific investigation and interpretation, Davies said.

Who will lead the investigation and how long it will take will be announced within days, according to the statement.