Hong Kong: Asian banks have largely escaped the worst of the global debt crisis but housing market downturns, especially in China and India, still threaten to pile up bad loans and slow the region’s economy.

After property crashes burnt Japanese and South-East Asian lenders in the 1990s, they have been more cautious. So falling home prices are much less of a risk than in the US, where the subprime mortgage meltdown brought down several leading banks.

Asian banks tend to limit loans to 70% of home prices, compared with between 80% and full value in the West. And few mortgages are securitized, let alone twisted into the kind of complex investment packages that went toxic as US homeowners defaulted. 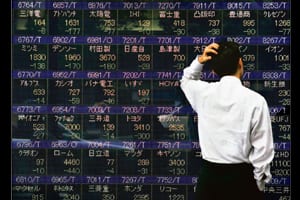 Property drag: A man looks at a video display showing Japanese stock prices in Tokyo on Tuesday. Property booms in Asia are turning to slowdowns, and threaten to slow the region’s economy. Michael Caronna / Reuters

The Asian Development Bank cut its 2009 economic growth forecast for Asia to 7.8% in mid-September from 7.2%, but the global financial crisis has deepened since.

After strong run-ups, Hong Kong and Singapore home prices are widely tipped to fall 15% next year as job cuts hit Asia’s main financial centres. In South Korea, unsold homes are at a record high, prices are falling and small construction firms are vulnerable.

India’s property boom fizzled into a price drop of one-third this year in some cities, and analysts expect the same in 2009.

But the biggest risk of property loan defaults is in China.

Developers are slashing prices to stem a sales slump, and dragging the whole market. As in the US, homeowners could flee if they owe banks more than their property is worth. “People are very mobile and hard to find," said Sun, whose firm sponsors mortgage securitization. “It’ll be a real issue."

Ironically, many of the property industry’s woes stem from Beijing’s efforts to cool the market and fend off a crash, by a clamp-down on loans to developers and rules to deter speculation. A perfect storm swelled up. Home sales plummeted, first in overheated Guangzhou and Shenzhen in the south, then elsewhere.

In response, China’s biggest property firm, China Vanke Co. Ltd, dropped prices by one-fifth at projects in Hangzhou and Shanghai, and other developers have gone further.

Reflecting the problems, bonds from firms including Shimao Property Holdings Ltd have slumped on concerns over possible default, as credit ratings agencies downgraded them. Chinese developers sold over $3.6 billion (Rs17,532 crore today) worth of bonds to international investors in 2006 and 2007, according to Thomson Reuters data.

In India, similar events are unfolding, with local media reports saying banks are tightening lending for property after total credit grew 26% this year.

Axis Bank Ltd, Yes Bank Ltd and HDFC Bank Ltd have the biggest exposure to developers, at around 12% of loans. And just over a quarter of loans at ICICI Bank Ltd are residential mortgages.

“Developers are in trouble in India and China because they took on high gearing to expand land banks," said Aaron Fischer, Asia property analyst at CLSA. “You’ll see some bankruptcies."

The situation is so dire in China that economists expect the government to back-peddal, and fast, fearing the ruin of a property industry that accounts for a quarter of total investment and 10% of gross domestic product, or GDP.

“A year ago China needed to tighten policies to ensure safety of the banking system and to bring down inflation," he said. “But who could have expected a global financial crisis like this?"

But as long as mortgages are new to Asia, around for only a decade in some countries, they present less of a risk than in the West.