New Delhi: The Congress party got a boost from unexpected quarters in the recent Lok Sabha polls—small regional parties and splinter groups that ate into the vote of its larger rivals. But the tide could turn in Tuesday’s assembly polls in Maharashtra, Haryana and Arunachal Pradesh, analysts say. 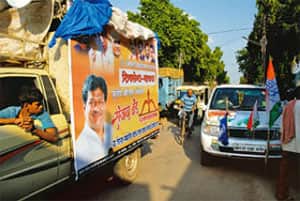 Election fever: Political campaigners in Maharashtra ahead of assembly elections in the state on Tuesday. Ashesh Shah / Mint

In Maharashtra, for example, the Congress-Nationalist Congress Party (NCP) alliance won 25 of the 48 Lok Sabha seats in the state as the Raj Thackeray-led Maharashtra Navnirman Sena (MNS) dented the base of the opposition Shiv Sena, led by uncle Bal Thackeray. The MNS is a splinter group of the Shiv Sena. A rally in support of MNS candidate Sudhakar Chavan in Maharashtra’s Thane on Thursday. PTI

Some analysts and even Congress leaders see the assembly polls playing out differently.

“The Congress could benefit out of the division in the Shiv Sena votes (in the Lok Sabha polls) because the MNS remained a local party, but the stakes are higher in assembly elections," Congress general secretary B.K. Hariprasad said. 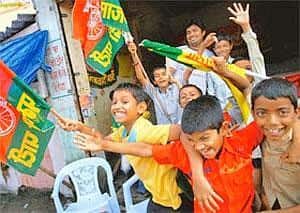 Children with Samajwadi Party flags in Bhiwandi, on the outskirts of Mumbai. Abhijit Bhatlekar / Mint

The Shiv Sena, for example, was backed by S.K. Patil, a former Congress leader from Maharashtra, primarily to break the dominance of trade unions in Mumbai’s industries in the 1960s, Gupta said.

In the Lok Sabha elections, the trend of small regional parties denting Congress’ larger rivals was evident in several states. A hoarding features Priya Shinde, an independent candidate from Aarvi assembly constituency in Maharashtra. Shinde is one of the numerous rebel candidates who are expected to act as spoilers for the Congress in the polls. Ashesh Shah / Mint

In Andhra Pradesh, it was the emergence of actor-politician Chiranjeevi’s Praja Rajyam Party (PRP) that helped the Congress consolidate the dominant Kamma community votes, especially in coastal constituencies where his party ate into the main opposition Telugu Desam Party (TDP)’s vote bank. The PRP won 17% of the total vote in its debut election in Andhra Pradesh.

“Most small or regional parties are restricted to pockets or reflect and cater to a particular caste or community," he said. “The difference, however, is (that) the Congress can withstand all this since only its margin of victory gets affected, not the outcome. Its support base does not get worn out completely."