Once seen as one of the most polluted cities in the country, Delhi has succeeded in arresting its runaway air pollution through consistent action. But the city is in imminent danger of losing its gains: the “breathing space" that Delhi gained can be lost if the future roadmap for pollution control is not set immediately.

It is a challenge that we need to understand. At one level, reduction in earlier pollution peaks has helped save lives in Delhi. The World Bank estimates nearly 3,629 fewer cases of premature deaths and much greater reductions in the number of cases of respiratory illness on an annual basis due to improvement in the air quality in Delhi. It also says if particulate levels can be further lowered to meet the clean air standards, more then 5,806 premature deaths can be avoided annually. The fact is, air pollution continues to remain a serious public health concern despite the improvement since the days when one death per hour was reported in Delhi due to air pollution-related diseases.

The challenge can prove to be more difficult, as there are newer threats. The extremely harmful tiny particles that go very deep into our lungs are still several folds higher than the standards. Nitrogen dioxide is on the rise. While very harmful in itself, it can also contribute to formation of another deadly pollutant, ozone. Uncommonly high levels of ozone were recorded last summer. The air is also laced with a deadly mix of air toxics, exposure to which can cause respiratory and cardiac problems and even cancer. 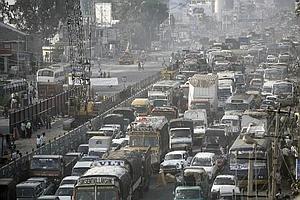 Delhi has more than 4.5 million registered vehicles and is adding more than 1,000 new vehicles each day on its roads. It further attracts lakhs of vehicles from outside on a daily basis.

Yet, the pollution battle remains difficult. In 2007, clean air standards for particulates of less than 2.5 micron could be met only on 36% of the days and nitrogen dioxide only on 28% of the days monitored at the traffic intersection of ITO. The overall air quality trend shows Delhi is on the verge of losing the gains of its first phase of action.

It is more worrying that even before Delhi could come to grips with its pollution challenge, more pollution hotspots have proliferated in the national capital region. High pollution spikes have been recorded in Gurgaon, Noida, Ghaziabad and Faridabad. Both respirable particles and nitrogen oxides show high elevated levels in residential sites in Noida — a sure sign of higher impact of vehicular exhausts. Common pollution control policies will have to be implemented across NCR to prevent leakages.

At the heart of this scourge in the region is the explosive increase in vehicle numbers that threatens to undo the small incremental gains. Delhi has more than 4.5 million registered vehicles and is adding more than 1,000 new vehicles each day on its roads. It further attracts lakhs of vehicles from outside on a daily basis. Personal vehicles — cars and two-wheelers — dominate this trend as the public transport is very inadequate.

If the first generation reforms seemed difficult, the future action will have to be even more aggressive. What Delhi needs is leapfrogging to stringent emission standards, significant upgrading of public transport, and restraints on personal vehicle usage. The legacy of one decade of action in Delhi provides the foundation for future change — to leapfrog to the future without pollution and congestion.

The writer is Associate Director, CSE