The proportion of married women in the age group of 15 to 19 years has dropped by 8 percentage points between 2001 and 2011, according to a recently released Census 2011 dataset. Yet, the practice of women marrying young and having children young remains deep-rooted, entwined with low literacy and social customs, and present in force in both rural and urban areas.

One out of every five women between 15 and 19 years of age is married. And 30% of the married ones have children. In the last decade, both these numbers have increased in urban areas. There is some correlation between female literacy and young marriages: 18 of the 20 worst districts, with the maximum from Rajasthan, are in the bottom 20% in female literacy. Beyond female literacy, social practices also play a part: for instance, Jammu and Kashmir shows low incidence of young women getting married, and certain districts show a high incidence even among their relatively more literate urban population. Rajasthan sees the highest number of early marriages, but it does not even feature in the top 10 states in terms of young births. Instead, it’s the north-eastern states that dominate, including districts with comparatively high levels of female literacy. 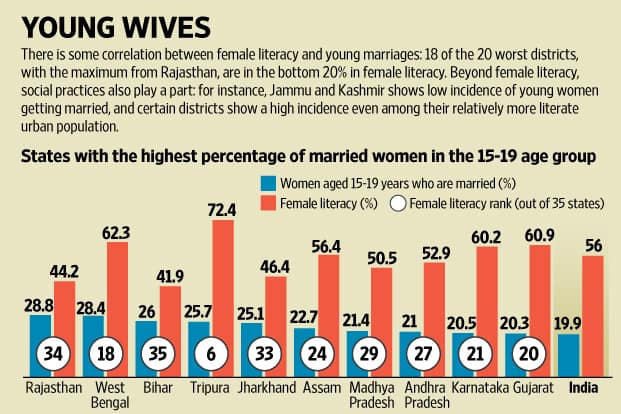 Note: Census groups women aged between 15 years and 19 years. Hence, it is not possible to ascertain how many of them are above 18 years, the legal age for marrying in India.