With barely a few months to go for 2019 Lok Sabha elections, the question across political party lines is: what can really be done now, and quickly?

New Delhi: When residents gather around the fire on foggy winter evenings in Rampura, a village in Uttar Pradesh’s Bareilly district, the conversation often veers toward the declining fortunes in agriculture. Take 27-year-old Pushpendra Singh, who completed his master’s degree in commerce in 2016, but was unable to find a decent job. Singh now toils on the family farm so that his younger brother can finish his studies and find a teaching job. His family has a debt of ₹ 6 lakh , but that has not stopped them from spending about ₹ 12,000 each month to educate the younger son.

“People feel their incomes plummeted after Prime Minister Narendra Modi took charge…now the only option is to vote the BJP out in the 2019 Lok Sabha elections," says Singh. When asked why he’s yet to marry, Singh promptly replies: “These days, even farmers do not want to marry their daughter in a family dependent on agriculture…they don’t mind lowly government jobs or any job where incomes are regular and stable. My family may own 10 acres of land but I will not be able to spend even ₹ 500 to take my wife to the town for a movie."

People feel their incomes plummeted after Narendra Modi took charge…now the only option is to vote the BJP out in the 2019 Lok Sabha elections- Pushpendra Singh, 27, of Rampura, Bareilly

Roughly 1,400km from Rampura, 19-year-old Sharad Markad, a young farmer from Ahmednagar in Maharashtra, shares a similar predicament. Faced with a drought, the third time in the last five years, Markad took upon himself to set up a cattle shed in his village where he is looking after 85 cows and buffaloes. Families in his village are struggling to keep their pomegranate orchards alive by hiring water tankers on credit.

“It’s scary…the fields are empty. Nobody has planted winter crops. Yet, we are selling pomegranates at a loss, for as low as ₹ 10 per kg," he says. In neighbouring Nashik, farmers are selling the Kharif (Autumn) harvest of onions at a pitiful ₹ 1-2 a kg, while the bulb is retailing in cities for ₹ 30.

Markad and Singh have never met each other, but they were both in Delhi last month—joining thousands in a protest march to Parliament Street led by farmers—in order to make their case for a farm loan waiver and to remind Prime Minister Narendra Modi of his promise of better returns for farmers. Both returned dismayed.

But with the contest for who gets to be India’s next prime minister heating up, it has become that much harder to ignore angry young men like Markad and Singh. On Tuesday, in an impromptu media briefing outside Parliament, Congress president Rahul Gandhi said: “We will not let the Prime Minister sleep until he waives off farm loans." Responding to a question, Gandhi also said that the Congress would announce a nationwide farm loan waiver if it comes to power in 2019.

While the efficacy and long-term effectiveness of a farm loan waiver may be debatable, the validity of the distress felt by farming families across the country is no longer up for debate. The question across party lines is: what can really be done now, and quickly?

The results of the recent assembly elections in Madhya Pradesh, Chhattisgarh and Rajasthan have only heightened the urgency to “do something". In the three states, the incumbent BJP managed to win just 35% of the 436 assembly seats in rural areas, while the Congress won 55% of the seats. Echoes of 2004, when another confident BJP-led government fell by the wayside in the face of a rural backlash, are hard to miss.

“In 2004, when the BJP lost as the ‘India Shining’ campaign backfired, rural anger had not yet found an expression in terms of organised protests like it has over the past year," says Yogendra Yadav, founder member of Jai Kisan Andolan, a farmers’ movement. “From the peak it reached in 2014, BJP will lose at least a hundred seats and that will be due to the flagging economy, and acute distress in rural areas, where the perception is that this government does not care."

In 2004...rural anger had not yet found an expression in terms of organised protests like it has over the past year- Yogendra Yadav, founder of Jai Kisan Andolan

That is at least the tone of the conversation in Sharad Markad’s cattle shed these days. “People talk about how the Prime Minister is keen on travelling the world, instead of listening to us or solving our problems. He even refuses to believe we are in trouble," says Markad, who dropped out of college a year ago.

Rural voters like him will mostly decide the fate of the contenders in the 2019 general elections (just about 55 out of the 542 Lok Sabha seats are fully urban). It’s not just mere coincidence that the decline in BJP’s electoral dominance, beginning with Gujarat assembly elections, mirrors the steep drop in wholesale food prices—which continues to slide downward.

At a farmers’ rally in Uttar Pradesh in February 2016, Prime Minister Modi set an ambitious target to double farmer incomes by 2022, the 75th year of India’s independence. Ever since, the Centre has launched several schemes—an electronic portal for trading in farm produce, a new crop insurance scheme, and a nudge to states to reform agriculture markets. But the success of all these initiatives has been limited. 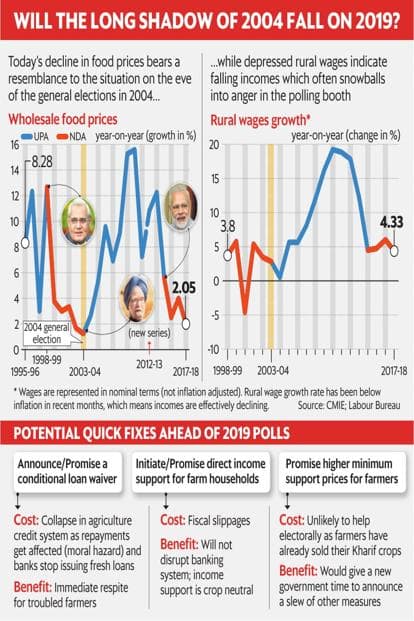 The fundamental risks in Indian agriculture, arising out of unpredictable prices and erratic weather events, remain unaddressed. Enrolment under the crop insurance scheme, for instance, fell from 40.2 million farmers in the 2016 Kharif season to 33.2 million by 2018, a staggering decline of 17%. Clearly, farmers are saying something. In a final push in September 2018, the Centre launched an ambitious crop procurement scheme called PM-AASHA, which promised farmers a return of 50% over costs. But this too failed to take off despite an earmark of ₹ 15,000 crore.

As farmers have already sold their Kharif harvest at a discount compared to minimum support prices (MSPs), the time available for the Modi government to do a course correction is limited. Farmers will sell their winter harvest next year only after they cast their votes in the general elections. So, another promise of remunerative prices by the BJP is unlikely to curry favour with rural India. The crisis will be further accentuated due to recurring delays in payments to sugarcane growers in Uttar Pradesh; dairy farmers selling milk at wholesale prices which are cheaper than bottled water (which sells at ₹ 20 a litre); and an intensifying drought in parts of Maharashtra, Gujarat and Uttar Pradesh.

The electoral dividend which the Congress reaped by promising a farm loan waiver in election-bound states (newly elected governments in Madhya Pradesh and Chhattisgarh signed off on a waiver of ₹ 2 lakh per farmer on Monday) is one probable option before the BJP. As it became clear that the BJP would lose to the Congress in three states, news agency Reuters reported that the Centre is actively considering a country-wide loan waiver.

The other option before the Modi government is to follow the Telangana model where farmers receive an annual direct income support of ₹ 8,000 per acre. The income transfer model came into focus as chief minister K. Chandrasekhar Rao swept back to power in the southern state.

According to Dharmakirti Joshi, chief economist at ratings agency Crisil, the fiscal space to announce a loan waiver at the national level is rather limited. “The state of the rural economy is unlikely to change in the coming months, given the trend in crops prices and wages. The government may look at creating more jobs through the rural employment guarantee scheme, but this will perhaps not be enough to lift rural incomes and demand," Joshi says.

Narendra Modi’s ascent to power in Delhi in May 2014 was followed by a country-wide drought, as the annual south-west monsoon which irrigates over half of India’s farm lands failed. Following consecutive years of sub-par rains in 2014 and 2015, farmers reaped a record harvest of grains and perishables in October 2016. However, demonetisation announced by Modi a month later led to a collapse in crop prices as cash supply dried up and consumption demand declined.

Ever since, farmers have been crying hoarse as prices of grains, pulses and oilseeds plunged lower than central government announced minimum support prices (MSP), and recurrent dips in perishable prices have pushed a number of farmers to destroy or abandon fresh harvests of onions, tomatoes, potatoes and other vegetables. In November 2018, wholesale food price inflation dipped to a low of -3.3%, the fifth successive month of deflation.

In addition to the persistent deflation in food prices, stagnant rural wages indicate that even day jobs are hard to come by in rural India. Between November 2017 and August this year (till which time data is available), growth in nominal rural wages trailed retail inflation every single month, indicating that real (inflation adjusted) rural wages contracted during this period.

The fall in earning capacity has particularly hit parts of the country which were already precarious. In rural Bundelkhand, a cluster of underdeveloped districts in Uttar Pradesh, where distress migration is rife, the BJP is likely to lose heavily, says Raja Bhaiya, a social worker who runs a livelihood-related non-profit Vidya Dham Samiti in Banda. “Last year, wages were ₹ 250 a day and, today, it is difficult for a poor family to find work that pays even ₹ 200. Unable to find employment in construction, labourers from cities like Delhi are already returning to villages in Bundelkhand," he says.

While Modi has spent innumerable campaign rallies propping up a vision of a ‘New India’ by 2022, what may ultimately matter are the material realities of the present. The fact that the steep drop in crop prices and rural wages perfectly mirrors the state of affairs at play during the 2004 ‘India Shining’ campaign only reinforces the limited value of visions and distant promises. In the immediate aftermath of BJP’s shock defeat in 2004, then-rural affairs editor of The Hindu, P.Sainath scathingly observed: “There is almost no government in the country that has ill-treated its farmers and not paid the price. That has hurt agriculture and not been punished... any incoming government that fails to see this writes its own exit policy."

While that warning may hold for any government, rural anger is just one of the many factors which determine election results in a country as incredibly complex as India. For instance, while the BJP may have lost in a closely fought race in Madhya Pradesh, the party retained its tally of six out of the seven assembly seats in the Mandsaur-Neemuch region—the hotbed of a farmer agitation which flared up in June 2017 and resulted in the death of five protesters.

It is precisely this uncertainty that would ensure that the opposition would push every possible lever. And farmers across the country have made sure they have a ready list of demands and, at least for the moment, the captive attention of political parties across the spectrum.