‘IPL is a spectacle...it could mean the death of Test cricket’

Lahore: If this was football, Imran Khan, chairman of Pakistan’s Tehreek-e-Insaaf party, could have been accused of scoring a self-goal when he decided to boycott the 18 February elections. A lot of people in Pakistan say he completely marginalized himself with this one decision. But, Khan, one of cricket’s d62494ca-2c68-11dd-8ee9-000b5dabf613.flvgreat all-rounders who is now a full-time politician, insists he will surely play another big innings. Khan is very critical of both President Pervez Musharraf as well as Asif Ali Zardari of the Pakistan Peoples Party (PPP) and says they have both betrayed the people’s verdict.

To those who think he is a spent force, his answer is that he’s not giving up. Khan continues to rail against problems that ail Pakistan and doesn’t mince words in saying that the Bush administration is treating Pakistan like toilet paper; Zardari is a small-time conman and Musharraf is one of the most shameless people in the world.

Jyoti Malhotra met Khan in his house by the canal in Lahore. Edited excerpts:

How is the situation in Pakistan after the elections?

The coalition that has come to power was so totally unprepared for the result that three months down the line there is total confusion. The main issue, of the judiciary, which should have been sorted out before the elections, is still not sorted out. The country is almost in a state of economic meltdown. You have a prime minister who has the responsibility, but the authority lies with Asif Zardari (Benazir Bhutto’s widower and PPP co-chairman). You have a chief minister in Punjab (Pakistan), but the authority lies with Shahbaz Sharif (former chief minister and brother of Nawaz Sharif). It just shows that the whole system isn’t equipped to either manage these crises, either to deal with the judiciary crisis, or to deal with 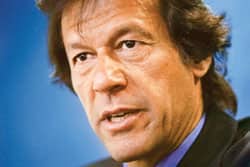 Why didn’t you fight the elections?

Well…if 60% of your judiciary is kicked out and your chief justice is under house arrest, and if you fight elections under an illegal and unconstitutional emergency, it means you are legitimizing the illegal and unconstitutional act of a military dictator. It would also mean that we are stabbing the judiciary in the back, which for the first time has taken a stand. My party, which has stood with the judiciary for 12 years, decided we were going to continue to stand with the judges.

Once the judges come back, will you join the government?

That’s a big if, because of crooked politicians and the status quo, which involves Musharraf as well as the Bush administration using Pakistan as its one-point agenda on its war against terrorism, using it like toilet paper. The (government doesn’t) want an independent justice system, so in my opinion even if they bring the judges back, they will have their hands tied. We are giving the government a chance, so if they bring a constitutional package to destroy the independence of the judiciary, we—the civil society and the political parties—will be out on the streets.

So you think Zardari is not the answer?

Zardari fooled us all by making these statesman-like statements in the beginning, and coming across as someone who had learnt a lot from his stints in jail. But unfortunately, he’s just trying to con the people; he’s turned out to be a small-time conman. One day he makes one statement, then he contradicts himself. He thinks he can fool all the people all the time. Actually, he’s destroyed his credibility very quickly.

Musharraf has to be one of the most shameless people I’ve come across because here is a man the whole country has given a verdict against—according to the polls over 75% of the people want him to go—and he is clinging on to power. I say he is shameless because so obviously people don’t want him anymore. He has destroyed the economy, there is runaway inflation, a tiny elite has got very rich and never ever have we seen corruption at this level.

What are your views on the Indian Premier League (IPL)?

Well, its been a big hit with the crowds. I must say I haven’t watched it much, but I have to give a slight warning because unless these things are put into slight perspective, cricket could be destroyed. You know IPL is a good spectacle, but as far as cricket connoisseurs go, it’s not really cricket. I proposed Twenty-20 cricket way back in 1989 to Kerry Packer, but that was as a way of introducing cricket to countries like the US, to people who don’t know about cricket. You cannot have more than a certain amount of Twenty-20 cricket because the standards are going to fall in cricket, and also it could mean the death of Test cricket.

Well, yes, but that’s why I say there should be a balance, because Twenty-20 cricket is going to bring innovations in cricket, like in batting, you will see batsmen being more innovative, which is obvious. But, batting techniques are also going to suffer. And the true test of a cricketer is his talent, technique and temperament, Twenty-20 doesn’t test a cricketer, it only tests talent and some improvisation. But if you ask a cricketer, he will only rate performances in Test cricket…Twenty-20 performances won’t be rated by cricketers, maybe by the public.

Why aren’t there many Pakistani cricketers in IPL?

I think it’s a sad reflection on Pakistan cricket. We’ve really mismanaged the cricket structure, we have so much talent here. But we have people on top of our cricket who have no idea about the game, so like other institutions in Pakistan, which have been destroyed by the military dictatorship, so has cricket been. The chairman is a nominee of the president who knows nothing about cricket, and the chairman’s only qualification is that he happens to be a blue-eyed boy of the president of Pakistan; you can’t run institutions like that.

Are you still a cricketer at heart?

Cricket is a thing of my past, cricket gave me valuable lessons in life, it helped me in other things, like building a cancer hospital, and now I’m building a university (on the lines of Oxford). It teaches you to struggle, teaches you to take the knocks, teaches you resilience, teaches you the most important lesson—you never lose until you give up. So it has taught me… It has been a stepping stone to other things. But it’s not part of my life anymore.

So is politics cricket?

Well, anything you do in your life, part of your past only (exists) for one thing, which is to equip you to deal with your future. You never live in your past, you just learn lessons from your past. As I said, cricket taught me this ability to struggle. And that is the most invaluable lesson anyone can learn, the ability to struggle, to take on challenges, which is what cricketing did, but it seems so long ago.

How can you, as a leader, improve India-Pakistan relations

We do our bit by visiting India, you can’t change your neighbours, so you have the option of living in a civilized way with each other, or like we have done so far. So, I try my best to promote good relations, but that still means you have to sort outstanding issues. You cannot have a solid foundation of a lasting friendship unless the basic issues are sorted out. Unfortunately, we have had very poor leadership in both our countries and as a result so much of our resources and energy goes into arming ourselves rather than look after our people.