New Delhi: Much of the spending on infrastructure in the next financial year is likely to be funded through resources other than budgetary allocations. 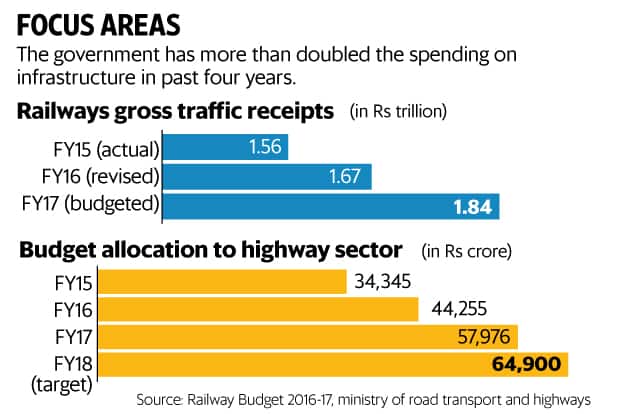 Officials from the ministries of road transport and highways, and railways said the finance ministry had already hinted at budgetary cuts in the next fiscal year. Finance minister Arun Jaitley presents the budget for fiscal year 2018-19, the last full budget before general elections next year, on 1 February.

“We have been given directions to work on land and asset monetization in both railway and road sectors and raising of funds through bonds. The finance ministry wants ministries to work towards a self-sustainable development model where government departments are more dependent on themselves than finance ministry for resources," a senior official said on condition of anonymity.

Infrastructure has been one of the focus areas of the National Democratic Alliance (NDA) government that assumed office in May 2014. Starting with an allocation of around Rs1.81 trillion for construction of public works, including roads, highways, ports and utilities in 2014-15, the government raised it to Rs396 crore in 2017-18, more than doubling the spending on infrastructure in four years.

The official cited above said the fact that key ministries overseeing infrastructure development had failed to spend the money allocated to them in previous years is a factor behind the likely cut in the next fiscal year.

Ministers heading key infrastructure ministries are already hinting at a cut. Earlier this month, railway minister Piyush Goyal said he would be satisfied with whatever amount is allocated to his ministry in the budget.

“We would fund railway expenditure through asset monetization," Goyal said, adding that the national transporter would be more aggressive on monetizing assets.

The government official quoted above said, “Railways has shown extremely sluggish growth. From the target of 30 stations to be redeveloped, work on only two has started. Similarly, electrification has failed to keep pace...the allocation is bound to reduce."

The national carrier would be unable to spend more than Rs1 trillion by 31 March, against the outlay of Rs1.31 trillion, he said.

A quarter of the allocated budget would remain unspent because of tardy progress in laying new tracks and renewal of old ones, the official said. Besides, the transporter’s operating ratio—operating expenses as a percentage of revenue—for the current fiscal year is above 95% at present.

The railways had sought gross budgetary support of Rs60,000 crore in 2018-19, up from Rs55,000 crore in the current fiscal year. The national carrier expects to spend Rs1.45 trillion to expand its network and improve its image in the next fiscal year.

Similarly, the roads and highways sector is lagging behind targets. Minister for road transport and highways Nitin Gadkari has targeted construction of 41km/day of national highways in the NDA government’s five years. At present, the average highway construction is around 27km/day.

Gadkari has several times hinted that funds are never a constraint for the development of roads and highways. “It’s the processes which delays the project implementation and the bureaucracy should work" to remove hurdles, he has said.

With funds available from the National Investment and Infrastructure Fund and asset monetization model like toll-operate-transfer (TOT), the minister is confident that it will be smooth sailing for both projects. The road ministry has sought over Rs30,000-40,000 crore in the budget for 2018-19. The financing is through allocation from the central road fund and toll collection.

Manish Agarwal, partner and leader of the infrastructure practice at consulting firm PwC, says the next budget needs to provide sector-specific mechanisms to address financial stress in infrastructure sectors. This should include resolution of large amounts under dispute between project developers and regulators.