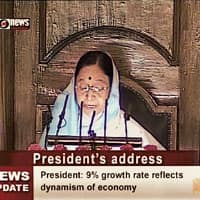 Constant endeavour: President Pratibha Patil addresses the joint sitting of the Parliament marking the commencement of the Budget session in New Delhi on Monday.

“This performance is all the more creditable against the background of high international oil prices and rising commodity prices, including food," Patil said as she flagged off the Budget session of Parliament. “It will continue to be the endeavour of my government to sustain growth while keeping prices under check."

Much to the Reserve Bank of India’s discomfort, inflation has been inching up in recent weeks, led higher by rising food and commodity prices at home and in global markets.

The Budget, scheduled to be presented on 29 February will be the government’s last full one with general elections due by May next year, is expected to extend tax breaks on personal income and cut duties on consumer goods to boost spending and revive growth ahead of the polls.

However, Patil’s speech was criticized by lead opposition party Bharatiya Janata Party (BJP), as well as the Communist Party of India (Marxist), whose outside support is critical for the UPA. Both parties said it failed to assess the impact of the slowdown in the US on the Indian economy, and underplayed internal security concerns including Naxalism in several states.

CPM leader Sitaram Yechury said that his party would raise the issues the speech had ignored, including the women’s reservation bill, central law for agricultural workers demanded by the party. “We are also going to protest against the ordinance recently brought in to allow foreign direct investment in futures trading exchanges," Yechury said.

Pragya Singh contributed to this story

New Delhi: Real estate developer Omaxe Ltd is looking to expand the scope of its operations by adding new clauses to the main object clause of the company, according to a postal ballot notice issued by the company.

The company is looking to add as many as 51 new clauses which will allow Omaxe to enter into new businesses such as infrastructure projects, wholesale, retail distribution, running hospitals, schools, colleges, aviation academy and multiplexes among others.

The company has also added clauses, which will allow it to enter into completely varied business segments such as manufacture and distribution of guns.

“We have decided to alter the main object clause of the company so that we don’t miss the bus when an opportunity comes along," Rohtas Goel, chairman and managing director of Omaxe, said.

“The process of amending the clauses is very time consuming, so we wanted to be prepared in case a business opportunity opens up."

The change proposed by the company in the main object clause needs to be approved by the members of the company.

REC fixes issue price for its IPO at Rs105

The issue received bids for 435 crore shares against 15.62 crore shares on offer, getting oversubscribed nearly 28 times. The equity shares were offered at a price band of ₹ 90-105.

Sources said the company is expected to list on the bourses by the third week of March. The portion reserved for qualified institutional buyers got subscribed by over 39 times and that for non-institutional investors by 27 times, sources said.

Mumbai:INX News Pvt. Ltd has signed up with Karan Thapar’s company ITV (Infotainment Television Pvt. Ltd) as editorial adviser on its soon-to-be-launched English news channel, NewsX. The advisory services will cover a review of progress to date and consultancy on future editorial development of the channel. Established in 2001, ITV has done work for BBC, Channel News Asia, CNBC TV18, CNN-IBN and Doordarshan among other channels.

“With the expertise of the editorial and operations team at NewsX, we are ready to provide the highest quality of intelligent news for today’s audience," said Indrani Mukerjea, chairperson, INX News.

Gandhinagar:The Narendra Modi government in Gujarat has levied Rs880 crore in fresh taxes in its 2008-09 budget presented on Monday with an estimated overall deficit of Rs116.20 crore.

Presenting the budget for the 13th time, finance minister Vajubhai Vala proposed raising the existing value-added tax (VAT) levied on the sale of goods in the state by 1-2.5%. Accordingly, the rate of VAT in the state will vary between 5% and 15%. However, the state government would bring in the necessary amendment in the law to allow traders to claim credit on additional VAT levied.

The state government has also decided, barring certain exceptions, to delegate powers to local bodies to levy, collect and retain the profession tax in their own local funds. This would make the local bodies earn revenue to the tune of about Rs120 crore per annum.

New Delhi: Despite an electoral commitment to spend 6% of the gross domestic product on education, the United Progressive Alliance (UPA) government’s allocation to education has averaged less than 4% in four years, an association of civil society organizations has said.

Even that has been funded to the extent of close to 60% by the education cess, says the Wada-na-Todo Abhiyan (WNTA), a national network of more than 3,000 rights action groups that works to hold the government accountable to its promises.

This means that despite the huge increase in direct tax revenues in recent years, the government has been essentially depending on the public to fund education, abdicating its own responsibility towards the weaker and poorer sections of society, says Lysa John, national secretary, WNTA.

Yamini Mishra of the Centre for Budget and Governance Accountability, a civil society organisation that seeks to make the budget process transparent to citizens, said that teacher-pupil ratios in some states are as high as 1:80; 10% of government schools work without blackboards; and 13% of schools need teachers. “We need at least 4 lakh new schools, and an increased allocation would help to get them," she added.

Two of the oil and gas discoveries since 21 January were made in the western region, one in the eastern state of Assam and one in the Arabian Sea, the company said in an e-mailed statement, without providing more details.

Mumbai: Two weeks after making its debut on the bourses, the shares of Reliance Power Ltd finally managed to trade above their issue price of Rs450 for the first time on Monday, riding on the bonus issue announcement that proposes three shares for every five shares held.

Shares of Reliance Power hit an intra-day high of Rs456 each after opening at Rs425 and closed Monday with gains of more than 8% at Rs450.40—marginally above the issue price. The last time the stock had breached these levels was on 11 February, the day it was listed. It had touched a high of Rs599.90, but plunged and closed at 17.22% below the issue price.

The board of the Reliance-Anil Dhirubhai Ambani Group (R-Adag) company has cleared a bonus proposal that is not applicable to the promoter group. Ambani and Reliance Energy Ltd jointly hold 90% of Reliance Power’s equity.

Hitesh Agrawal, head of research at Angel Broking Ltd, said although the three-for-five bonus issue is a positive step by the R-Adag chairman, it still does not do enough to bring down the stock’s valuation at desired levels. “It is a positive move, but he could have done a bit better," Agarwal said. Post bonus, valuation of the stock will come down to less than 5 times the company’s fiscal 2012 book value, from about 8 times currently, he added. “Even post bonus issue, the stock (Reliance Power) will remain at a premium to its peers such as NTPC Ltd and Tata Power Ltd," said Agrawal. A head of research at a Mumbai-based brokerage, who did not wish to be identified, said, “It is an investor- friendly move in the near term, but in the long run, the company is just drawing on the premium the stock was listed on for the bonus, and it does not really improve the fundamentals of the company (Reliance Power)."

Mumbai: Inflation, arising out of food and oil prices, is still a concern and the Reserve Bank of India (RBI) will have to find ways to manage inflationary expectations, a senior official said on Monday.

“The main concern of the RBI is to manage inflationary expectations and we have to find ways to keep inflation under check," R.B. Barman, executive director, told reporters.

Barman, responsible for information technology at the bank, was speaking on the sidelines of a seminar on banking technology.

The widely watched wholesale price index was running at a six-month high of 4.35% in early February, not far away from the central bank’s comfort zone of 5%. India raised fuel prices between 3.3-4.6% this month to bring local prices more in line with global benchmarks, which may add 15-30 basis points to headline inflation, economists said.

It kept policy rates unchanged at a review last month, despite growing expectations from some quarters that the central bank may cut rates to shore up softening growth. “We must not give signals that fuel expectations of higher inflation," he said.

Mumbai: Essel group promoted Dish TV India Ltd said on Monday it had cancelled a preferential allotment of shares and warrants to Indivision India Partners (IIP), a Mauritius-based private equity fund, as the latter did not want to subscribe to the warrants due to market volatility.

The process of issue and allotment of equity shares and warrants to IIP on a preferential basis stands withdrawn and cancelled, Dish TV said in a filing to the Bombay Stock Exchange.

Dish TV was to allot 12.5 million shares at Rs100 each and 9.62 million warrants convertible into equity at Rs130 each.

“We reiterate our commitment toward Dish TV business and are confident of its growth prospects ahead. The promoters have in the past infused funds into the business as and when required, and would continue to support in the near future," Dish TV chairman Subhash Chandra said.

Jubilant’s order book for the calendar year stands further augmented with the addition of these contracts—the increase in size, over a similar announcement made last year, stands at over 50%. In addition to these annual contracts, the company, as part of its normal business, also executes half yearly, quarterly and monthly contracts and spot sales. The new contracts have been signed with prominent international pharma and other life science companies, some of whom have been doing business with Jubilant for the past many years.

Some members of the Bhartia family, which run Jubiliant, have a majority stake in HT Media Ltd, the publisher of ‘Mint’.

Mumbai:IRB Infrastructure Developers Ltd and Tulsi Extrusions Ltd made their debut on the Bombay Stock Exchange (BSE) at a premium on Monday.

Mumbai: United Forum for Bank Unions (UFBU) has called off its two-day countrywide strike, due to start on Monday, after Indian Banks’ Association agreed to discuss the demands of the union.

UFBU, representing nine bank unions and about a million workers, is opposing merger proposals for the subsidiaries of State Bank of India, the country’s largest lender, and seeking pension for all bank staff.

Mumbai: Falling in line with the leading public sector banks, Punjab National Bank (PNB) on Monday announced reduction in its prime lending rate (PLR) by 0.5% to 12.5%.

The rate has been reduced from existing level of 13% to 12.5%, which is effective from March 1, PNB said in a communication to the Bombay Stock Exchange. The reduction in PLR is likely to moderate lending rates linked with PLR, including housing (floating rate), corporate, car loans, etc.

Suppliers have an option to sell an additional 5%, the New-Delhi based company said on its website. Bidders must offer non-coking coal of foreign origin and quote prices at delivery locations specified by MMTC. Suppliers should deliver 170,000 tonnes of the fuel latest by April 30.